Ayatollah Ali al-Sistani has called on the Iraqi people to "choose wisely" in the coming elections, holding Prime Minister Nouri al-Maliki responsible for problems in Iraq and opposing a third term for him. 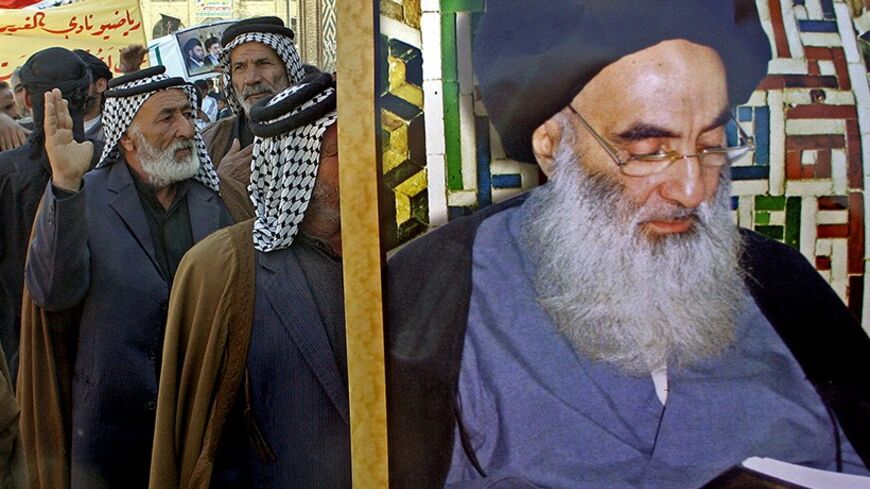 Months ago, Ayatollah Ali al-Sistani began to guide the Iraqi public through statements regularly issued by him or his office, focusing on the need to fix the current situation. Sistani's guidance is going even further as the elections approach, by providing details and extended visions about the essential criteria that candidates must have to properly represent the Iraqi people, thus preparing them to be knowledgeable and insightful regarding the coming elections. On Feb. 24, Sistani issued a statement calling on voters to "choose wisely" so as not to have regrets later, and asked them to differentiate between the good and the bad.

In his latest position, the official representative for Sistani, Sheikh Abdul Mahdi al-Karbalai, in a sermon on April 4 called for comprehensive change, which would be brought about by voters making the right decision in the coming elections. The Karbalai's sermon was published on Sistani’s official website, proving all mentioned details to be true. Karbalai criticized the way the country was governed on all levels, while violence has been plaguing Iraqi society and corruption infesting the Iraqi government, and citizens lack the basic necessities for a decent life.

Karbalai affirmed that it is not Sistani’s role to introduce or support specific candidates. The decision is that of the Iraqi voters, who are to decide the fate of their country through taking part in the elections. At the same time, Sistani calls on Iraqi voters to study the pasts and qualifications of candidates, and refrain from electing whoever has failed in accomplishing their job or was involved in corruption cases. Karbalai reiterated that voters should not vote on the basis of religious and tribal affiliations.

Iraqi Prime Minister Nouri al-Maliki visited Najaf — which Shiites consider a sacred place — on April 10 to launch his electoral campaign. Maliki addressed Shiites using a sectarian rhetoric to urge them to vote for him in the upcoming elections. Maliki said that he would want to form a majority government, without the participation of other political parties in the country. He asked to meet with Sistani, but the latter refused the invitation. Sistani’s office informed Maliki’s officials concerned with the visit that there was no chance to meet with Sistani.

Previously, Maliki claimed that he was supported by Sistani and that the latter considers him to be a successful statesman. Sistani’s office, however, explicitly replied to Maliki's statements as follows: “This video, regardless of its inaccurate content, [highlights positions dating back] four years. Sistani refrained from hosting any official because he was not satisfied with their performance. He has stressed more than once that he does not support any candidate for the next elections, and no one should delude citizens into thinking that some candidates are closer to the religious leader than others.”

Some Iraqi media outlets said that Maliki has received a letter from Sistani’s office through mediators warning him against running for a third mandate. Sheikh Bashir al-Nujaifi, one of the four clerics coordinating with Sistani, spoke against Maliki's third mandate, considering that Iraq will not rise if Maliki remained in office. He called on Iraqi voters to dismiss him through elections. Al-Monitor verified the authenticity of this statement with circles close to his office.

What Iraqis are drawing off these stances is that Sistani has been highly dissatisfied with the performance of Maliki’s government throughout his rule, and that he is explicitly calling for a comprehensive change in the political sphere through the elections. What Sistani is doing is considered a tough stance, characterized by wisdom, as he is drawing the prospective lines of the Iraqi political system through orienting Iraqis into making the right decision in the elections and developing their general political performance without directly interfering. This is what distinguishes Sistani’s work from the concept of velayat-e faqih, and makes his project democratic and civil.