Demonstrations in Iraq and Lebanon may signal new round of "Arab Springs"; Will Saudi capture of Khobar towers mastermind affect US policy toward Iran? 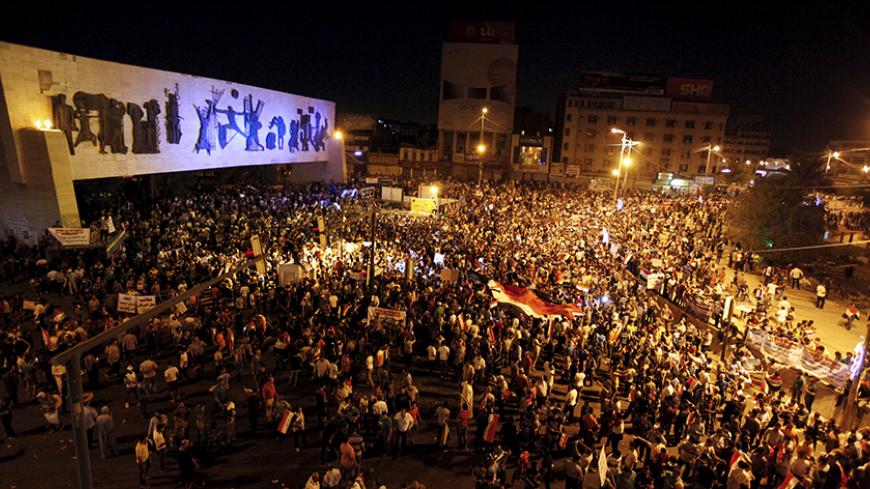 The return of the Iraqi street

Ali Mamouri writes this week, “The July 16 killing of Muntazar al-Hilfi by police in al-Madina, north of Basra, during a protest for improved services was redolent of the death of Tunisian Mohamed Bouazizi on Jan. 4, 2011.” Al-Hilfi’s killing energized anti-corruption protests in central and southern Iraq, which have continued in some form until now.

While religious authorities in Najaf, including Grand Ayatollah Ali al-Sistani, have backed the demonstrations, Mamouri observes, “It was striking that Iranian official authorities and Iraqi parties known for their loyalty to Iran strongly opposed the popular protests, leveling numerous accusations against them and trying to stop them. It is noteworthy that pro-Iran Islamic parties dominating government were targeted by protesters because of their poor governing performance.”

Mamouri adds, “The ongoing protests in Iraq have brought together religious, civilian, secularist, communist and other communities. They all seek to reform the system and eradicate corruption within the Iraqi government. It seems that religious slogans and figures, especially Sistani, are exploited to attack the protests in order to create a rift between the protesters. … The situation on the ground indicates that the Iranian or pro-Iran movements’ attacks and assaults on protesters by accusing them of being anti-religion, breaching religion or being affiliated to IS [Islamic State] aim to defend specific Islamist parties with regional alliances with Iran. In light of the Iranian authorities’ explicit attack on the protests and Sistani’s support for them, conflict between the two camps on the way to deal with Iraqi affairs seems to loom in the horizon. While Iran wants Iraq to be a key element in its regional camp against Saudi Arabia, Sistani wants to distance Iraq from the ongoing regional conflicts, as much as possible, to allow it to make independent decisions within the framework of an efficient and stable civil state.”

Mustafa al-Kadhimi writes that despite the Iraqi parliament’s endorsement of Prime Minister Haider al-Abadi’s reform package, “The difficulty of this task lies not only in the lack of required professional and scientific experts to deal with the situation — especially in light of the major brain drain in all domains during the past decade — but also in the will of Iraqi politicians to adopt the philosophy of reform in the interest of unity and society.”

Kadhimi adds that implementation of Abadi’s reforms requires “serious and fair working groups” among parliamentarians and “shortcuts to bring about change on the ground.”

“Abadi can accelerate the implementation of the reforms by winning further support of the religious authorities, which have so far supported the reforms he decided on, and by obtaining the approval of the political blocs. It is worth mentioning that some reservations on these reforms were expressed by Vice President Ayad Allawi and Vice President Osama al-Nujaifi, who considered the reforms a violation of the constitution. The government has major challenges to face in its implementation of reform measures, given the size of the problems in the state’s structure, disintegrating institutions, the confusion and inconsistency of laws and management’s instructions, and the deep-rooted corruption even in state regulatory systems,” Kadhimi writes.

Mohammed Salih writes that the Iraqi parliament’s ratification on Aug. 17, 2015, of a report that holds former Prime Minister Nouri al-Maliki and more than 30 senior Iraqi officials responsible for the fall of Mosul may be a “litmus test” for Abadi’s reform initiative.

“In a country crippled by conflict, corruption and personal rivalries at the highest levels, if Abadi is serious about introducing a new approach to governance, the Mosul report could be used to his advantage to implement the desired reforms,” adds Salih.

Mohammad Ali Shabani reports on Iran’s complicated role in Iraqi politics. Iranian President Hassan Rouhani and Foreign Minister Mohammad Javad Zarif have given top priority to Iraq. Zarif has been a frequent visitor to Iraq, including meetings with Grand Ayatollah Ali al-Sistani, who is of Iranian origin, and whose influence in Iraq exceeds all other players, including Qasem Soleimani, head of Iran’s Islamic Revolutionary Guard Corps’ Quds Force.

According to Shabani, “While his military clout has expanded, Soleimani’s political influence appears to be increasingly checked. Indeed, today, the most powerful Iranian in Iraq is arguably Grand Ayatollah Ali al-Sistani. While in the making for years, this trajectory has accelerated following IS’ blitz in northern Iraq last summer. The fall of Mosul and increasing tensions with the Kurdistan Regional Government and Sunni leaders did not singlehandedly end former Iraqi Prime Minister Nouri al-Maliki’s rule. Rather, it was the disapproval of the grand ayatollah. Neither Soleimani’s personal backing nor the highest number of votes for his bloc and for his person could shield Maliki from Najaf.”

Shabani concludes, “For now, it appears that Tehran is avoiding direct and overt involvement in the Shiite leadership dispute in Baghdad. Iran will likely maintain this posture until and unless the situation is seen as spiraling out of control, at which point it may choose to intervene to help forge a consensus. Indeed, this has been the playbook in recent years. This, in turn, may cause the Shiite leadership in Baghdad to pre-emptively reach out to the grand ayatollah, who also seeks to avoid becoming too embroiled in factional politics. In this waiting game, which could potentially turn explosive, the main victim may once again be ordinary Iraqis, who are mired not only in a war against IS in the trenches, but also corruption and factionalism at home.”

The Economist reports this week on the protests in Beirut, which began last month over uncollected trash, but is actually a “pretext” for a broader malaise rooted “in the sectarian constitutional foundation on which the country rests.”

As in Iraq, the demand for reform and accountability represents another potentially encouraging, nonsectarian trend in a region where politics is otherwise often defined by ethnic and religious fault lines, proxy wars and bloodshed.

Al-Monitor reported in 2014 that “Lebanese citizens may be finding cause and uniting around a new agenda, even movement, built upon a lingering social and economic malaise finally erupting into an overdue popular revolt calling for a new social contract based upon national, not sectarian or factional priorities.”

Samy Gemayel, a member of Lebanon’s parliament and a senior leader of Lebanon’s Kataeb Party, spoke about this trend when he told Al-Monitor in December 2013 that “We need to talk about the corruption in the country. How, the way, the country is being managed. The whole, the corruption and the whole system. … Decentralization is the key to stop all this mafia that is monopolizing the wealth of the country and taking people hostage. And it is the case because today you have a few people who are ruling the country, and they have the power to use the people’s money. So it’s very easy. You vote for me, I give you what you need. If you don’t vote for me, I don’t give you what you need. And this is how the country is ruled.”

Bruce Riedel writes this week about the timing of Saudi Arabia’s capture of Ahmed Ibrahim al-Mughassil, the mastermind of the 1996 terrorist attack in Khobar that killed 19 American service members.

A Wall Street Journal editorial on Aug. 28 urges Congress to “take note. From the 1983 bombing of the Marine barracks in Lebanon to the Khobar Towers to the Iranian-made IEDs [improvised explosive devices] that took the lives of many of our troops in Iraq and Afghanistan, Iran and its proxies have never hesitated to shed American blood.”

Riedel, who served as deputy assistant secretary of defense in 1996 and was at the scene of the Khobar Towers attack within hours, speculates on whether the Saudi capture of Mughassil, nearly 20 years after Khobar, and in the midst of the congressional debate over the Joint Comprehensive Plan of Action, is a coincidence. Riedel writes, “Mughassil was the senior Saudi Hezbollah official interacting with the Iranians. He would know exactly who was involved in the plot in Tehran. If he cooperated (a huge and unlikely if) he could establish the chain of command. In the more likely case that Mughassil's interrogation is selectively leaked to the media, it could still pose embarrassing and dangerous questions about [Iranian Supreme Leader Ayatollah Ali] Khamenei's role. The news of Mughassil's apprehension will also raise questions about how the 20-year-old manhunt broke now. The timing is certain to strike many as suspicious. Is the news intended to remind Americans about Iran's long history of involvement in terrorism just as the congressional debate on the Iran nuclear deal reaches its peak? The Saudis are very concerned that the deal will end Iran's isolation and strengthen its capacity for regional mischief. Riyadh has been fairly quiet about its concerns, but it is deeply engaged in a proxy war with Iran in Yemen. Even if the timing of Mughassil's arrest is a coincidence, the decision to leak the news is probably intended to influence the debate.”