Lawmakers see Iran's rise as key concern in fight against IS

Republicans focus on Tehran in first hearing since Tikrit offensive. 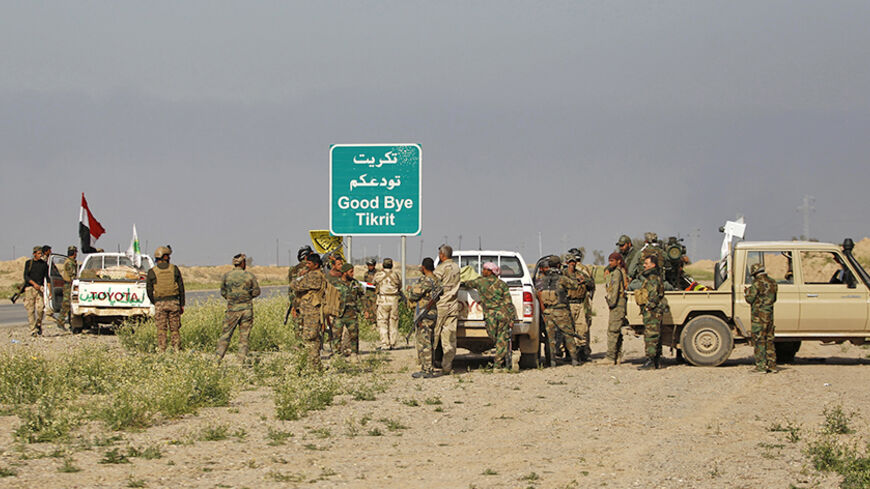 Shiite fighters gather with their weapons next to a sign in the town of al-Alam, just north of Tikrit, March 9, 2015. - REUTERS/Thaier Al-Sudani

Iran has emerged as a main issue for Congress as it debates whether to give President Barack Obama the powers he wants to battle the Islamic State (IS) in Iraq.

In their first hearing on the issue since last week's assault on Tikrit by Tehran-trained Shiite militias, members of the Senate Foreign Relations Committee on March 11 repeatedly asked US officials whether defeating IS would only empower Iran. Most senators had no ready solutions to offer, but several suggested a beefed-up US presence was the only way to keep Iran in check.

"In many ways, every single thing the United States is doing right now in Iraq to deal with [IS] … is really inuring to the benefit of Iran," Chairman Bob Corker, R-Tenn., said in the opening to the hearing. "In other words, we're making Iraq a better place for Iran."

He pointed to Iranian influence on the Iraqi government and parliament, Shiite militias' central role in the battle to retake Tikrit and the emergence of Iran's Quds Force Cmdr. Qasem Soleimani as a popular hero in the fight against IS.

"At the end of the day, we have different goals as it relates to Iraq," he said. "Both in the short term as it relates to [IS] and in the long term of a democratic, multi-ethnic government."

More hawkish voices seemed to endorse greater US engagement as a counterweight.

"We will never destroy [IS] without empowering Sunnis who want to rise up and fight [IS] themselves," they said in a statement. "We cannot jeopardize that Sunni support through the delusion of Iran’s ‘positive influence’ in the fight against [IS]."

Several lawmakers at the hearing agreed.

"[It's] our concern that if it's Iran that is at the tip of the spear here — if they're the ones sponsoring victories — they're going to have influence in Iraq, and that's going to be … very dangerous for the regional peace," said Sen. Ron Johnson, R-Wis. "I'm not seeing the full commitment out of this administration and as a result we're seeing the growing influence — a very dangerous influence — of Iran."

Sen. Marco Rubio, R-Fla., came closest to arguing for an influx of US troops to Iraq. He accused the Obama administration of ruling out that option to avoid antagonizing Tehran as it negotiates a nuclear deal.

"Iran's goal is to become the most dominant regional power. And in that realm, they see a US military presence as a threat or an impediment to that goal," said the potential 2016 presidential candidate. "I believe that much of our strategy with regards to [IS] is being driven by a desire not to upset Iran so that they don't walk away from the negotiating table and the deal that you're working on."

Secretary of State John Kerry pushed back hard, accusing the freshman senator of being out of his depth.

"The facts completely contradict that," Kerry told Rubio. "I think you're misreading it if you think there isn't a mutual interest with regard to Daesh [IS] among every country in the region."

Kerry went on to say that Iran's expanding influence in surrounding countries remains a top concern for the Obama administration, even as diplomatic talks continue. He said the United States was working closely with its Arab partners in the region to "counter" that Iranian influence.

"I am confident that we will, all of us together, take the steps necessary to counter what Iran is doing in other ways," Kerry said.

"There's six things that from the military perspective's concern us about Iranian influence," Dempsey said. "The four regional concerns are surrogates and proxies that are present in Iraq, Syria, Lebanon; weapons trafficking; ballistic missile technologies; and mines that they've developed to be able to close the Straits of Hormuz. And then the two global threats, of course, are their nuclear aspirations … for a weapon, which is being dealt with through negotiations on a diplomatic tract, and cyber is the other global threat they pose. So Iran's activities across the region … are a concern for us."

But he said there was a "general consensus" among coalition partners that "anything anyone does to counter [IS] is in the main a good outcome."

While there was "no indication" that Shiite-backed militias "intend to turn on us" once IS is defeated, Dempsey said the United States was "watching closely whether the militias, when they recapture lost territory, engage in acts of retribution and ethnic cleansing."

"We are all concerned about what happens after the drums stop beating and [IS] is defeated and whether the government of Iraq will remain on a path to provide an inclusive government for all of the various groups," Dempsey said. "Believe me, I share your concerns. The Tikrit offensive will be a strategic inflection point one way or the other, in terms of easing our concerns or increasing them."