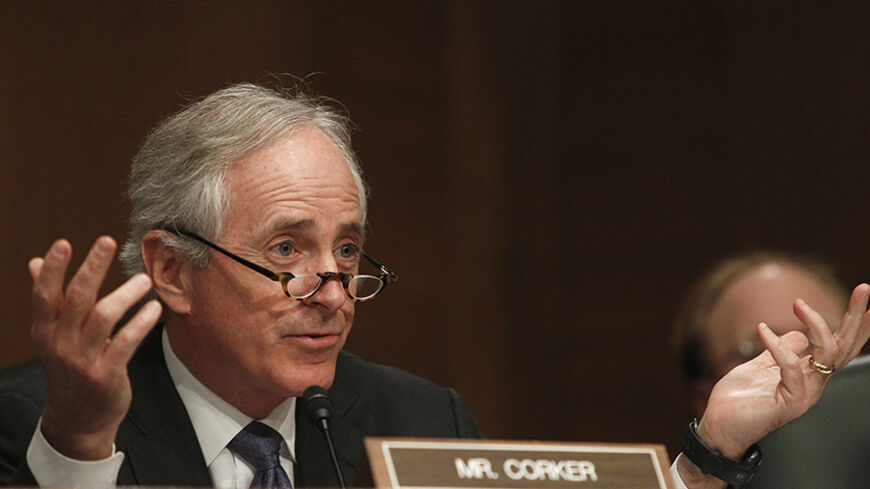 Key lawmakers put the Barack Obama administration on notice June 11 that Congress is running out of patience with a number of strategic partners in the Middle East and can no longer be counted on to prop up authoritarian rulers through endless flows of military aid.

The nomination hearing for President Obama's picks to serve as ambassadors to Egypt, Iraq and Qatar quickly devolved into a recitation of bipartisan grievances about the direction the region is headed. Members of the Senate Foreign Relations Committee said all three countries shared some blame and pressed the nominees to deliver a stern message.

While oil-rich Qatar does not receive US aid, lawmakers warned that its strategic partnership with the United States could be harmed if it continues to support Islamist militants in Syria.

"Because of our inability, or lack of desire, in taking the lead relative to the Syrian opposition, Qatar obviously has taken a role that is unhealthy," said Sen. Bob Corker, R-Tenn., the top Republican on the committee.

And they made it clear they will hold Qatar responsible for keeping close watch on the five Taliban leaders released in exchange for US Sgt. Bowe Bergdahl.

Sen. Ron Johnson, R-Wis., blasted the deal with the Gulf nation after video surfaced of the Afghans arriving in Qatar and being greeted as heroes. The Taliban have turned the footage into a propaganda video, complete with hypnotic Pashto chants celebrating a victory for the insurgency.

"It doesn't look like a particularly restrictive environment to me," Johnson said. "Were there restrictions [in the memorandum of understanding with Qatar] in terms of public displays for propaganda purposes within that? In other words, has Qatar already violated that?"

"If I am confirmed, this goes to the very top of my list of priorities," ambassador to Qatar nominee Dana Shell Smith told Johnson. "We will be working very closely with the Qataris verifying the restrictions they have put on these individuals."

She told Corker that Qatar is now working more closely with the United States in terms of the rebels they're supporting, which oppose Syrian President Bashar al-Assad, and praised the emirate's "incredibly generous" $1.2 billion in humanitarian aid.

"We do have the sense that we are making progress in terms of coordination," Shell Smith said. "It's all of our goal to support the moderate opposition in Syria."

Lawmakers also demanded a new direction from Egypt and Iraq.

"If we are going to continue to see mass death penalty sentences, if we are going to see massive arrests of the young people (who helped start the Egyptian revolution), if President [Abdel Fattah al-] Sisi believes that only his engagement in the Sinai — which I applaud — is sufficient for his relationship with the United States, then there will be a rude awakening," committee Chairman Robert Menendez, D-N.J., told ambassador to Egypt nominee Robert Beecroft. "And I hope that in your role as our ambassador that you'll be able to relay to President Sisi that we need a broader agenda to see progress moving forward."

Menendez went on to say that the spending bill approved in January makes it clear that Secretary of State John Kerry must certify that the newly elected president "is taking steps to govern democratically" before the full $1.3 billion in annual military aid can be released.

"I was most troubled while I was [in Egypt] in February about the situation with journalists," added Sen. Tim Kaine, D-Va., chairman of the committee's panel on Near Eastern and South and Central Asian affairs.

The chairman likewise warned that aid to Iraq is in jeopardy. The Obama administration has asked for about $310 million in bilateral assistance to the country in its fiscal year 2015 budget, according to a new analysis by the Project on Middle East Democracy (POMED), 89% of it in the form of military aid.

Menendez raised concerns about reports that Iraqi forces have used barrel bombs in their fight against Islamist militants in Fallujah. And he demanded that Iraq do more to prevent Iran from flying arms shipments to Syria through Iraqi airspace.

"I don't want to hear Iraq tell us that we need actionable intelligence — when we have it, we'll provide it," he told nominee Stuart Jones. "But they have a responsibility in doing random surveillance of overflights. And that is an excuse that is unacceptable."

Menendez has long made clear his concerns about Iraq and Egypt.

The chairman held up the sale of Apache attack helicopters to Iraq for several months over concerns that the government of Shiite Prime Minister Nouri al-Maliki was consolidating power and discriminating against Sunnis. And he and Corker signed on to a letter to Obama last fall urging the president to demand Maliki chart a more democratic and inclusive course.

"We must see more evidence from Prime Minister Maliki that U.S. security assistance and arms sales are part of a comprehensive Iraqi strategy that addresses the political sources of the current violence and seeks to bring lasting peace to the country," says the letter, which was also signed by Senate Armed Services members Carl Levin, D-Mich., James Inhofe, R-Okla., John McCain, R-Ariz., and Lindsey Graham, R-S.C.

Obama's nominees, all of them career foreign service officers, were left to diplomatically promise close cooperation with Congress while avoiding any statements that could anger their future host countries before they even get to their posts.

Beecroft took solace from the fact that Sisi expressed his desire during his presidential address to be "a president for all Egyptians" and "to see all Egyptians enjoy fundamental rights and freedoms."

"I think what we want to do — to the extent we can — is push and take him up on that and encourage him to follow through," Beecroft said.

And Jones was left trying to find a silver lining amid reports that Islamic State of Iraq and al-Sham (ISIS, or ISIL) militants are making their way toward Baghdad.

"I think that as the government faces this terrorist challenge with ISIL, there's strong incentive — and political will — to try to unify the [different ethnic and sectarian] groups," he said. "Just recently, the prime minister issued a statement encouraging national unity and inviting participation in unifying the groups against ISIL. So I think there is political will."

He pointed to the recent announcement that 6,000 tribal members had joined the Iraqi security forces as reason for hope.

"This is obviously something where the United States can continue to play a positive role," Jones said. "And we should."