Democrats and Republicans alike have misgivings about the Pentagon's push for a greater US role in Iraq and Syria. 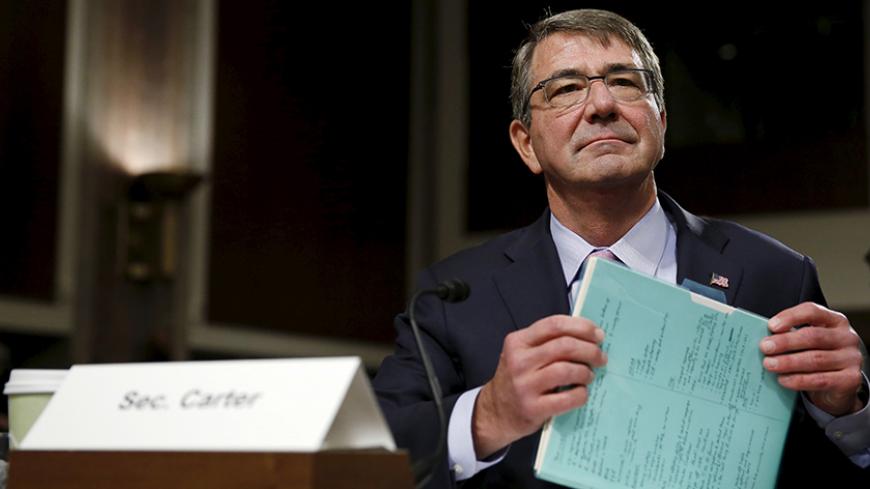 The Pentagon's push for a beefed-up US role in the war against the Islamic State (IS) landed with a thud on Capitol Hill on Oct. 27.

Defense Secretary Ash Carter told lawmakers on the Senate Armed Services Committee that military officials are considering a strategy of "3 Rs" focusing on Raqqa, Ramadi and raids in their bid to put the Islamist group on the back foot. Carter said the strategy includes a stepped-up bombing campaign as well as more special forces missions that will put US troops in harm's way.

"We won’t hold back from supporting capable partners in opportunistic attacks against ISIL [IS]," Carter said, "or conducting such missions directly, whether by strikes from the air or direct action on the ground."

Some Democrats immediately raised concerns with a strategy they fear will inevitably lead to an escalation of the US troop presence. Rep. James McGovern, D-Mass., warned of "endless war" as the first reports began to float new proposals to embed US troops with Iraqi security forces and deploy special forces to Syria.

"Today’s report that the Pentagon is considering embedding some US troops with Iraqi forces as part of the war against ISIS — bringing American forces to the front lines — is extremely concerning," McGovern said in a statement the evening of Oct. 26. "We have been repeatedly reassured that the US would not have a combat role in the war against ISIS, but this suggests just the opposite."

A McGovern aide told Al-Monitor that lawmakers are keeping a close watch on any changes in US posture. President Barack Obama withdrew the last combat troops from Iraq in 2011, fulfilling a campaign promise, but has since sent back about 3,500 service members to help train the Iraqi army and assorted militias fighting IS.

"Congressman McGovern is closely monitoring developments in the US military campaign against ISIS [IS]," the aide said. "Working with several of his colleagues in the House, he is exploring all options for strengthening congressional oversight."

Some Republican hawks, meanwhile, said the changes being discussed would make no difference on the ground.

McCain and others are adamant that any strategy that doesn't take aim at Bashar al-Assad in Syria is destined to fail.

"I agree; I think we should have more US presence in Iraq," said panel member Lindsey Graham, R-S.C., a long-shot candidate for president. "I think we should be in on the ground in Syria helping the indigenous forces in Syria destroy ISIL. Count me in for that. But the cancer that causes the war is Assad; any settlement is going to have Assad, or somebody like him, in charge. That means the war never ends."

The Senate Foreign Relations Committee meanwhile heard from Secretary of State John Kerry in a closed session. The briefing focused in part on Kerry's hopes for the upcoming meeting in Vienna on Oct. 30 concerning a political settlement in Syria, according to lawmakers.

"I think they believe that the role Russia and Iran are playing right now can create an opportunity for a diplomatic solution," panel chairman Bob Corker, R-Tenn., told reporters after the briefing. "It's somewhat difficult to look at the facts on the ground relative to what Russia and Iran are doing and see that congruently leading to a place where all parties can agree."

Carter's comments come days after the first US combat death in the war against IS. Master Sgt. Joshua Wheeler was killed in an assault with Kurdish forces to free prisoners from an IS compound in Iraq.

Some Republicans refused to endorse the new strategy without a clearer understanding of what it entails.

"My thoughts, before you engage any American troops, [are] ... what's the goal, what's the strategy to achieve it, and are you completely committed to achieving the goal before you start committing troops," said Senate Foreign Relations panel member Ron Johnson, R-Wis. "And that is what I have never gotten out of this administration. There's a lot of questions that remain unanswered."

And several Democrats bristled at proposals to expand the US military role in the campaign against IS without congressional debate. President Obama has been relying on the 2001 war authorization against al-Qaeda and the 2002 Iraq War vote as legal cover for the current campaign.

"I think they are way beyond their legal authority right now," fellow panel member Tim Kaine, D-Va., told Al-Monitor. "I think it's time for Congress to get into this."

Congress continues its examination of the changing US military role on Oct. 28 with a hearing in the Senate Foreign Relations Committee. Witnesses include the departing special presidential envoy for the global coalition to counter IS, retired Gen. John Allen, and Assistant Secretary of State for Near Eastern Affairs Anne Patterson.