What's the one thing that Arabs, Turks and Iranians can all agree on?

Majorities in eight Muslim countries blame “corrupt, repressive and unrepresentative governments” and wrong-headed religious leaders for the rise of extremist groups such as the Islamic State. 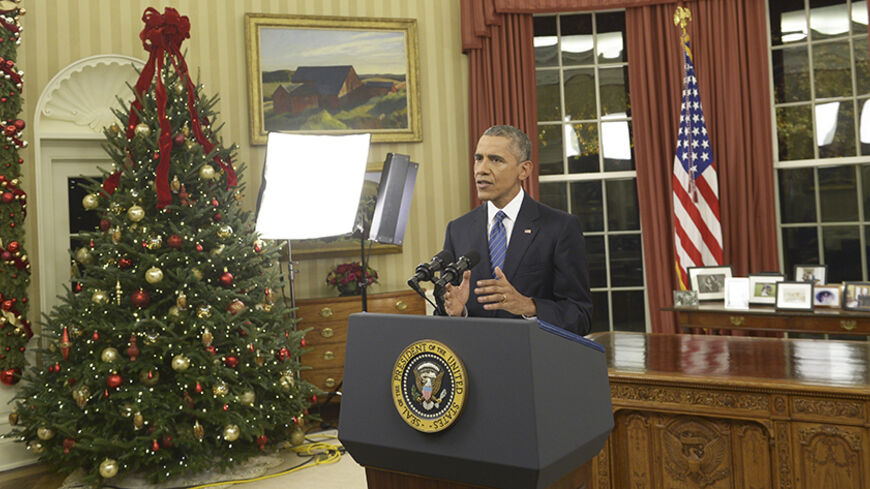 US President Barack Obama speaks about counterterrorism and the United States' fight against the Islamic State during an address to the nation from the Oval Office of the White House in Washington, Dec. 6, 2015. - REUTERS/Saul Loeb/Pool

A new survey of eight Middle East countries finds consensus on two issues — that the group that calls itself the Islamic State (IS) is a major threat and that the United States' role in countering extremist violence in the region is “extremely negative.”

Conducted in September before recent terrorist attacks in France and the United States, the face-to-face surveys with 7,400 adults in six Arab states plus Turkey and Iran also found wide support among Arabs for the creation of a joint Arab force to try to resolve conflicts in Syria, Iraq and potentially to serve as peacekeepers in a Palestinian state.

Despite the prevalent view that US policy toward groups such as IS has been counterproductive, “anger at the United States” ranked lower as a perceived driver of extremism.

Jim Zogby, president of the Arab-American Institute and managing director of Zogby Research Services, told Al-Monitor in an interview that more than 50% of those polled still cited anti-US anger as a factor in the rise of jihadist groups. He added that the weight of this driver had diminished in relative terms because of the “less heavy” US military footprint in the region under the Barack Obama administration.

In past surveys, Zogby noted, 90% had faulted US policies as a cause for extremism.

“A softer US footprint pays off,” Zogby later told a Washington audience assembled by the Middle East Institute. “It’s still a problem but not the main cause.”

Meanwhile, support for a joint Arab force was robust and seemed to reflect a desire in the region for an indigenous substitute for US boots on Arab ground.

The survey found that citizens of the United Arab Emirates (UAE) were the most enthusiastic, with 98% saying that the UAE should contribute financial support and a third saying that Emirati soldiers should take part in the force. About 75% of Saudis backed financial contributions and 40% said Saudi manpower should also be contributed. Similar figures were recorded for Egypt.

The findings are instructive at a time when the Obama administration has emphasized the need for Sunni Arabs to provide ground forces to complement the US-led air campaign against IS in Syria and Iraq.

A Saudi-led coalition is already fighting in Yemen and the UAE has suffered major losses among the 1,500 troops it has contributed to the ground war against Houthi rebels.

Saudi Arabia has only about 86 members of its special forces in Yemen, according to retired Marine Gen. Jim Jones, a former national security adviser to Obama. Jones, speaking Dec. 8 at the Atlantic Council, a Washington think tank, suggested creating a NATO-like force for willing Arab states, with US assistance.

Nawaf Obaid, a Saudi citizen and visiting fellow at Harvard’s Belfer Center for Science and International Affairs, told the Atlantic Council that Yemen was a trial run for other pan-Arab interventions. He said that Turkish President Recep Tayyip Erdogan would be visiting Saudi Arabia later this month to discuss forming a Sunni force to patrol the northern border of Syria.

“We’re in the process of moving beyond relying on the US for security,” Obaid said, noting the large quantities of weapons Saudi Arabia has purchased from the US along with training of Saudis over many decades. Sunni Arab reluctance to intervene in Syria, Obaid said, reflected less a lack of ability or will to “put skin in the game” than disagreement with Washington about the priority of removing Syrian President Bashar al-Assad versus defeating IS.

The Zogby survey, in polling on Iraq, contradicted the impression sometimes put forward by Iraqi Kurds that a large majority favor separation from Baghdad. Indeed, only 20% of Kurds favored partition and a majority of all ethnic and sectarian groups said the solution to Iraq’s problems is a more inclusive and representative government.

Another theme highlighted by the findings, as in past polls, was Sunni distrust of Iran and opposition to its intervention in support of Assad.

Large majorities in Egypt, Jordan, Saudi Arabia, the UAE and Turkey said that Iran’s Revolutionary Guard Corps and the Iran-backed Lebanese force, Hezbollah, were major causes of the Syrian conflict. The exception was Lebanon, where Shiite Muslims are a plurality. Only 35% of Lebanese agreed that Iran was playing a major role in Syria, with an even smaller percentage — 20% — of Shiite Lebanese faulting Tehran for the Syria war.

In a possible pan-Islamic convergence, however, the survey showed that Iranians are not that enthusiastic either about their government’s heavy involvement in regional conflicts.

Only 48% said the government should give “greater support to our allies in Iraq, Syria, Lebanon and Yemen.”

The top priorities among Iranians were “improving the economy and creating employment” (81%) and “advancing democracy and protecting personal and civil rights” (75%). Sixty percent said improving relations with Arab countries should be a priority and a similar percentage advocated improving ties with the United States and the West in the aftermath of a recent nuclear accord.

Asked how they envisioned their country’s role in the region, only 19% said that Iran “should be the dominant player” — an interesting finding in light of Arab concerns. More than 40% said Iran should not be involved militarily in the region at all and should focus instead on “developing peaceful relations based on equality with other countries” in the neighborhood.