A University of Maryland telephone survey of Iranians finds they like their president and foreign minister and are hopeful that the nuclear deal will provide economic rewards. 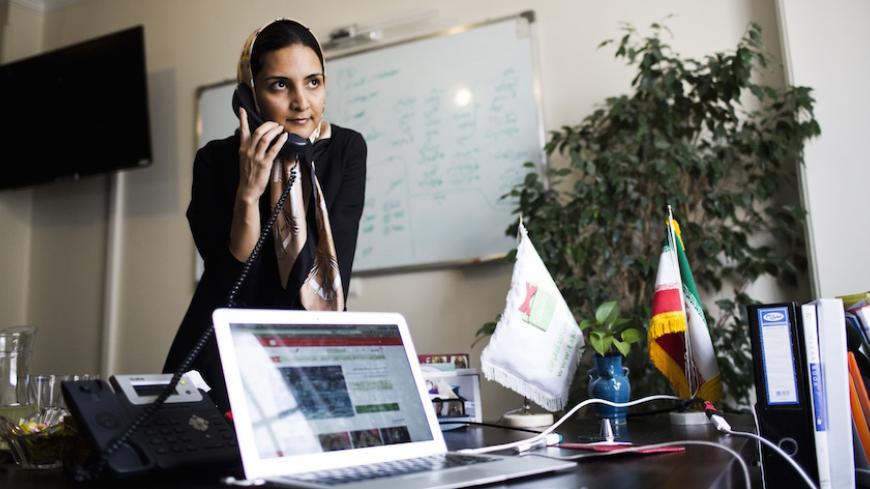 Iranian Nazanin Daneshvar, founder of the startup company Takhfifan, speaks on the phone in her office in Tehran, July 1, 2015. - BEHROUZ MEHRI/AFP/Getty Images

A new poll of Iranians taken just before the landmark nuclear deal went into full effect shows strong support for Iranian President Hassan Rouhani and closer ties with Europe, but negative views of the United States.

The poll was conducted Dec. 29 through Jan. 15 by the University of Maryland working through an intermediary. It canvassed by telephone 1,012 Iranians above the age of 18 and had a margin of error of plus or minus 3.2%.

According to an advance copy shared with Al-Monitor, 82% had a favorable opinion of Rouhani and 78% liked Foreign Minister Mohammad Javad Zarif, who led the negotiations with the United States and five other nations that culminated in the Joint Comprehensive Plan of Action. The poll also found that 59% of Iranians want supporters of Rouhani to win upcoming elections for a new parliament.

The warm feelings toward the president reflected widespread Iranian approval of the JCPOA, which lifted European, UN and some US sanctions against Iran on Jan. 16 in return for curbs on Iran's nuclear program. According to the poll, 72% back the deal and 80% approve of better relations with Europe.

The United States, however, was not popular. While other recent polls have shown majority support for closer ties with the United States as well as Europe, in this survey, 71% had an unfavorable view of the United States. One reason may be concern about the survivability of the nuclear deal under President Barack Obama’s successor: Only 34% of those polled had confidence that the United States would carry out its obligations under the JCPOA, a drop of 11 points since a previous University of Maryland poll in August.

And while Rouhani remains popular, less than half of those polled (47%) said the Iranian economy is improving, 10 points less than in August. Those who strongly backed the nuclear deal dropped from 43% in the prior poll to 30%, a reflection of a more realistic view of what sanctions relief might entail.

The low regard for the United States could also be tied to continuing US economic sanctions against Iran. According to the poll, a plurality of 44% believes that while some US sanctions will be lifted over time, many will remain. At the same time, 65% of Iranians said they did not expect the United States to impose new sanctions to replace those lifted under the JCPOA.

The survey said 67% of those polled said it was “very likely” they would vote in the Feb. 26 parliamentary elections; 63% said economic issues were the most important for the new parliament to address. Only 1% listed the lack of civil liberties in Iran, perhaps a reflection of Iranian understanding that the parliament has limited powers in this regard compared with Supreme Leader Ayatollah Ali Khamenei.

A majority of Iranians said they were expecting significant foreign investment and economic growth as a result of the JCPOA, although many thought progress would take at least a year.

According to the survey, Russia, China, Germany and France — all eager to expand their economic relations with Iran post-sanctions — were all far more popular than the United States, which retains many restrictions on US business with Iran. Only Britain and Saudi Arabia were less popular, with approval ratings of 26% and 11%, respectively. While the US government was extremely unpopular, 53% of Iranians said they had a positive view of the American people.

The most unpopular entity for Iranians among those listed in the poll is the group that calls itself the Islamic State. Of those polled, 98% had a “very unfavorable” view of IS.

Most Iranians in the survey also backed their government’s support for groups fighting IS and other Sunni militants, including Kurds, Shiite militias, Hezbollah, the government of Syrian President Bashar al-Assad and Houthi rebels in Yemen. Despite recent estrangement with Hamas, 70% of Iranians polled backed Iranian government ties to Hamas. A majority of 63% said Iran should send its own military personnel to fight in Syria. The top reasons: to fight “terrorists” and prevent them from entering Iran.

These findings contradict a poll done just a few months earlier by Zogby Research Services, which was conducted face to face. In that survey, only 19% said Iran should be the “dominant player” in the Middle East. More than 40% said Iran should not be involved militarily in regional conflicts at all and should instead focus on “developing peaceful relations based on equality with other countries.”

The discrepancy could reflect concerns among those polled by telephone that their views would not remain confidential and a desire to say what they thought their government would like to hear. Khamenei has inveighed against the United States since the JCPOA was signed and warned that the United States cannot be trusted to live up to its commitments.

At the same time, 80% in the University of Maryland-commissioned poll backed Iran’s participation in negotiations to try to end the war in Syria.