A year after the Joint Comprehensive Plan of Action (JCPOA) was signed, most Iranians still support it, but a large majority lacks confidence that the United States will carry out its obligations and believes Washington is trying to prevent other countries from normalizing trade relations with the Islamic Republic. 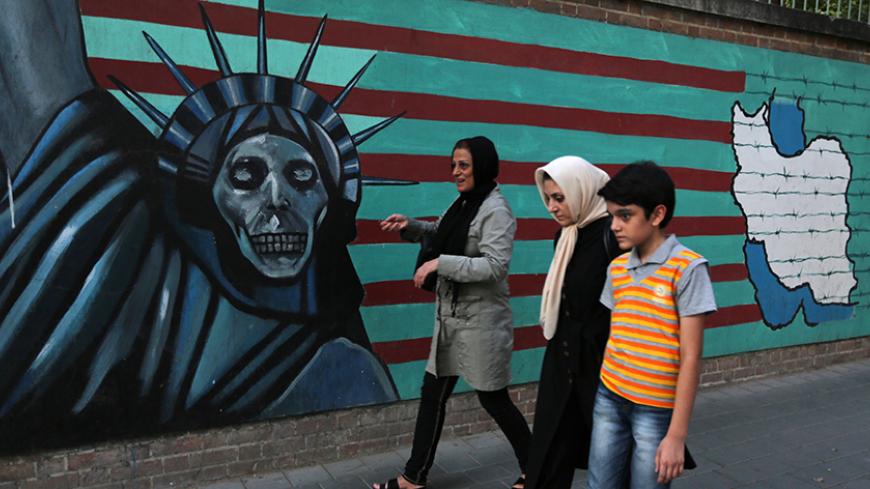 An Iranian family walks past anti-US graffiti on the wall of the former US embassy in Tehran on July 14, 2015. - ATTA KENARE/AFP/Getty Images

A year after their government signed a landmark nuclear agreement, many Iranians are disappointed by lackluster economic progress, doubt that the United States will fulfill its part of the bargain and are more favorably disposed toward a controversial former president, Mahmoud Ahmadinejad, a new poll shows.

The survey of 1,007 Iranians — conducted by telephone from June 17-27 by IranPoll.com, an independent Toronto-based firm, for the University of Maryland — confirms anecdotal information that Iranians had overly high expectations for the Joint Comprehensive Plan of Action (JCPOA) and failed to appreciate the obstacles Iran would still face in attracting foreign investment, reconnecting with foreign banks and increasing employment.

Among the findings, shared with Al-Monitor in advance, is a dramatic rise in popular understanding of what the JCPOA actually entailed. A year ago, a majority of Iranians (62.2%) thought all US sanctions on Iran would eventually be lifted under the agreement; now only 23.4% does. (The United States agreed to lift so-called secondary nuclear-related sanctions, affecting foreign companies, but left in place most restrictions on American economic interaction with Iran.)

Among the most concerning results of the poll was that a large majority (72%) say they have little or no confidence that the United States will meet its obligations under the deal. This compares to 41% who felt that way last September.

A substantial majority of 66.1% believes that the US government is seeking other ways to maintain the negative affect of sanctions it actually lifted. According to the Iranpoll.com survey, which has a margin of error of +/- 3.2%, nearly three-fourths of Iranians (74.7%) believe that the United States is trying to prevent other countries from normalizing trade and economic relations with Iran despite lifting secondary sanctions.

Such a negative view could boost the political fortunes of Iranian hard-liners who never supported the agreement and could undermine its major provisions over the next 10-15 years.

Ebrahim Mohseni, a research associate at the Center for International and Security Studies at the University of Maryland and one of the architects of the poll, told Al-Monitor in an email that "Iranians were expecting a lot but feel that they have received nothing tangible in return for Iran's nuclear concessions." Mohseni warned that "unless Iranians see real economic gains from the nuclear deal, the nuclear agreement, those who negotiated it and the foreign policy approach that made it possible will all be in jeopardy as Iran's election season rhetoric heats up."

Since the JCPOA went into full implementation on Jan. 16, Iranian reintegration into the international economy has been slow in part because of continued US restrictions on American business and financial dealings with Iran, in part because of foreign companies' assessment that Iran transactions remain risky and in part because of structural problems in the Iranian economy.

David Lipton, a senior American working for the International Monetary Fund, who participated in the first IMF management team to visit Iran since the 1979 revolution, recently compared the challenges Iran faces post-JCPOA to that of Eastern European countries following the collapse of the Soviet Union.

Iranians are now more realistic — and pessimistic — about their short-term economic prospects than they were when the JCPOA was signed.

According to the new poll, three-fourths (73.7%) of the population feel that their living situation has not improved since the deal was signed, although 66% remain optimistic about future progress. Currently, only 42.2% believe the economy is getting better, down from 57.4% in a poll last August, and nearly 59% say the country's economic situation is bad compared to 43.7% who felt that way in May 2015.

The Statistical Center of Iran has estimated unemployment at 2.5 million, or 11% of the workforce, a 0.4% increase compared to the previous Iranian calendar year. However, the parliament's research center has put the number of unemployed, underemployed and those who have given up trying to find jobs at an even more worrisome 6.5 million people.

While the government of President Hassan Rouhani has brought down inflation to near single digits and moved the economy out of recession, lackluster growth and employment are denting his approval ratings and increasing support for Ahmadinejad, his controversial populist predecessor.

While 61% of Iranians had a very favorable opinion of Rouhani immediately after the JCPOA was reached, only 38% feel that way now.

Western supporters of the nuclear agreement hoped it would bolster Rouhani and his cabinet of pragmatic technocrats, and now they worry about the survivability of the JCPOA if Iranians continue to feel that they did not receive all the benefits they were promised.

Rouhani is expected to run for another four-year term as president next June. According to the poll, 45% would vote for him, down from 53.4% a year ago, while 36.7% would choose Ahmadinejad, an increase of 10.1 percentage points from May 2015.

Iranian attitudes toward the United States have also undergone a change for the worse.

A majority of 54% now opposes military cooperation with the United States against the group that calls itself the Islamic State — a reversal from the 59% who favored such cooperation after the JCPOA was signed.

Iranians still support the nuclear deal but by a smaller margin: 62.6% compared to 75.5% last August.

A slight majority of 55.3% sees the deal as beneficial for both Iran and its negotiating partners, the five permanent members of the UN Security Council plus Germany. But there is also a growing sense in Iran that their negotiators gave up too much for too little. According to the new poll, 51.4% now believes that Iran made major concessions compared to 39.7% last September.

Among other interesting findings is a sharp jump in negative attitudes toward Saudi Arabia — 90% now compared to 71.3% in May 2015. The increase follows the death of hundreds of Iranian pilgrims at the hajj last year and the Saudi execution of a prominent Shiite cleric at the beginning of this year. The two countries are on opposite sides in a series of proxy wars, including in Yemen and Syria.

A majority of Iranians (67.6%) says Iran should increase its role in the region. A similar percentage, 64.3%, backs sending troops to Syria to bolster President Bashar al-Assad. At the same time, 81% supports Iranian participation in diplomatic negotiations to try to end the Syrian civil war.

The most popular government officials in Iran are Rouhani, with 81.9% holding a favorable view of him, down from 89.1% after the JCPOA was signed; Foreign Minister Javad Zarif, with a 77.3% favorable rating down from 89.4% last August; and Qasem Soleimani, the head of the Quds Force of the Revolutionary Guards. According to the poll, 75.5% of Iranians have a favorable view of Soleimani, up from 72.7% in January.

Tehran mayor Mohammad Baqer Qalibaf also saw his favorables rise to 73.2% from 67.5%, while Ahmadinejad jumped from 57% in January to 65.3% last month.