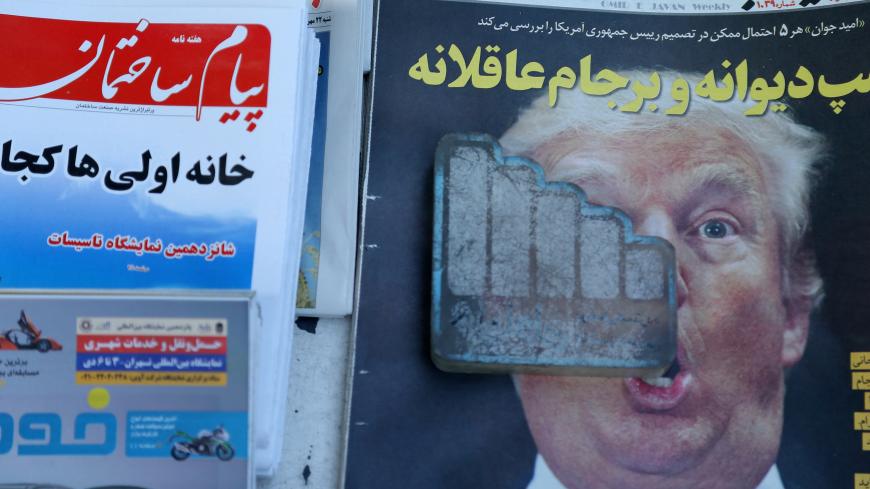 A newspaper featuring a picture of US President Donald Trump is seen in Tehran, Iran, Oct. 14, 2017. - REUTERS/Nazanin Tabatabaee Yazdi/TIMA

More than two-thirds of Iranians are dissatisfied with their country's economic situation and most blame corruption and mismanagement, according to the first major poll of Iranian public opinion conducted since large-scale demonstrations broke out in late December.

Economic slogans predominated during the protests, which spread to more than 100 provincial cities and towns, although chants against Iran’s leaders and Islamic system were also prevalent. A near-unanimous 96% of those surveyed in the new poll said the current government should do more to combat financial and bureaucratic corruption, while about 16% said Iran needs fundamental political change.

The telephone survey of 1,002 Iranians, by the Center for International and Security Studies at Maryland (CISSM) and IranPoll.com, was conducted Jan. 16-24, only a few days after the demonstrations subsided. It has a margin of error of plus or minus 3.1%.

Asked why anyone should trust the answers, given the restrictive nature of the Iranian system, Ebrahim Mohseni, a research scholar at CISSM who designed the poll and who has been studying Iranian public opinion since 2006, defended his methodology. He told Al-Monitor that the latest findings were in line with previous surveys and that respondents select "quite a few responses that are far from the official positions of the Islamic Republic."

When the protests erupted, some in the West saw the beginning of a new revolution that would overturn Iran's theocratic system. However, the new poll suggests change could just as well head in another direction — toward more hard-line policies.

Indeed, the survey shows that Qasem Soleimani — the head of the Quds Force of the Islamic Revolutionary Guard Corps and a man under US sanctions — remains the most popular figure among regime stalwarts. According to the poll, he is gaining in popularity with an 83% approval rating now compared to 73% two years ago.

President Hassan Rouhani, meanwhile, has seen a noticeable slide, from 82% approval two years ago to just over 65% now. Foreign Minister Mohammad Javad Zarif's numbers have also gone south, with 68% approval now versus 78% in 2016.

As in previous surveys, Iranians are most concerned about the economy and are clearly disappointed with the lack of tangible benefits from the 2015 Iran nuclear deal.

Asked to state the most serious challenge Iran faces from among a list of economic, political and societal woes, a plurality of 40% chose unemployment.

More than 85% said that subsidies for gasoline and other necessities should not be cut as the government had planned. Parliament has since rejected the cuts and the budget for the new fiscal year that begins in March is being revised.

Iranians also shared deep anxiety about environmental degradation, with more than 94% saying that climate change is a serious problem. Lack of water has become a major issue in Iran and has forced many farmers to abandon their land and move to provincial cities, which were a center of unrest during the recent protests.

Continuing a trend that began before US President Donald Trump's election, fewer Iranians expressed support for the nuclear deal negotiated by his predecessor. Where three-quarters of Iranians backed the Joint Comprehensive Plan of Action (JCPOA) in August 2015, now only 55% do, and only 26% strongly.

While 55% would stick with the deal if the United States withdraws but other parties remain, nearly 59% said Iran should restart elements of its nuclear program restricted by the JCPOA if that happens. More than 64% would refuse to renegotiate or extend any of the agreement's limitations, as the Trump administration appears to be seeking. Nearly 57% said Iran's missile program — a major US concern — is nonnegotiable.

Most ominously, 67% said the "JCPOA experience shows that it is not worthwhile for Iran to make concessions, because Iran cannot have confidence that if it makes a concession world powers will honor their side of an agreement."

Esfandyar Batmanghelidj, the founder and publisher of Bourse & Bazaar, a media company that supports Iran's business diplomacy, said he was alarmed to see that a majority of respondents, 60%, now believe that the United States has not lifted all the sanctions it promised to under the JCPOA compared to 51% last December.

"This suggests that while Trump's policy on Iran may so far have consisted of mostly talk and little action, even a move like decertification, which was designed to keep the United States in the deal while still allowing the administration to raise its concerns, are amounting to direct violations of the deal in the eyes of the Iranian public," Batmanghelidj told Al-Monitor. "The long-term implications for US-Iran relations should not be ignored."

When the nuclear agreement was reached, many Iranians hoped it would presage an overall improvement in bilateral relations with the United States, which have been strained since the 1979 Islamic revolution. That has not happened.

More than 82% of those polled said relations with the United States have not improved as a result of the JCPOA, compared to 57% who gave that opinion in a poll in December 2016. More than 69% said Trump has a hostile policy toward Iran, up 20 percentage points from December 2016.

Trump's early and repeated efforts to bar or limit Iranians from traveling to the United States have also undercut Iranians' belief in the sincerity of his concerns about their welfare. Not surprisingly, a whopping 87% of those polled said that Trump's expressions of support for the protesters — which he repeated this week in his first State of the Union address — had either hurt the protesters (39%) or had no effect (48%).

While the percentage of Iranians who blame their economic problems on foreign sanctions has risen — from 26% in 2015 to 32% — 63% said corruption has had the greatest negative impact on the economy. More than 87% said Iran should do more to make its business environment more attractive to foreign investment.

Nearly 45% would end or reduce aid to the government of Syrian President Bashar al-Assad now that the Islamic State has largely been vanquished; however, 48% would continue that assistance until Assad's government gains full control over all of Syria.

Views of Iranian intervention in Yemen are also nearly evenly split. According to the poll, nearly 47% want to continue to help the Houthi rebels against forces backed by Saudi Arabia and the United Arab Emirates, while 41% say Iran should not be involved in Yemen's multi-sided civil war.