Gen. Lloyd Austin said US-led forces are already having a significant impact confronting the group that calls itself the Islamic State and are not focused for now on rolling back IS advances in Syria. 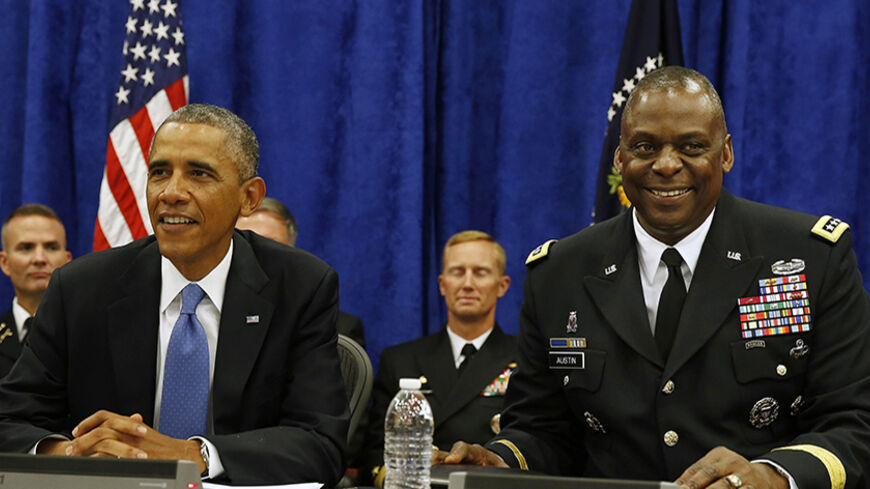 US President Barack Obama sits next to Gen. Lloyd Austin during a briefing at US Central Command at MacDill Air Force Base in Tampa, Florida, Sept. 17, 2014. - REUTERS/Larry Downing

Gen. Lloyd Austin, commander of US forces in the Middle East and South Asia, said Nov. 6 that the US-led coalition against the group that calls itself the Islamic State (IS) would benefit from Turkish bases to carry out airstrikes, but could still succeed without more cooperation from this NATO ally.

Austin, in wide-ranging and rare remarks before a Washington audience at the Atlantic Council, asserted that slow progress is being made against IS despite Turkey’s refusal to permit the use of Incirlik Air Base for bombing runs on IS forces concentrated near Turkey’s border with Syria or in Iraq. So far, Turkey is only allowing reconnaissance by unarmed drones.

“When and if the Turks decide to be more forthcoming in helping the coalition, it will clearly be value-added,” Austin said, responding to a question from Al-Monitor. “The more access to basing and overflight rights, the better.”

Turkey’s limited cooperation reflects the bigger priority its government places on ousting Syrian President Bashar al-Assad and reducing refugee flows across its borders. The United States, however, is focused on reducing the IS threat to Iraq and has refused to set up a no-fly zone in northern Syria near the Turkish border. Austin, who spent a decade leading troops in Iraq and Afghanistan and who now heads US Central Command, did not mention Assad once during his remarks and a question-and-answer session.

“We’re focused on Iraq as our main effort,” Austin said. Strikes on IS forces in Syria are designed to “shape” the situation in Iraq by killing IS members, destroying equipment and the group’s ability to generate revenue from oil fields, the veteran commander added.

In Iraq, the United States is using Kurdish and Iraqi forces as its “boots on the ground” to push back IS from key roads and facilities and gradually decrease its hold on Sunni territory. “We are having a significant effect on the [IS] element,” Austin said.

Austin suggested that the United States lacks a reliable partner in Syria, without mentioning the opposition Free Syrian Army (FSA) or that US policy still ostensibly calls for Assad to step down.

There are “a couple of things going for us in Iraq we don’t have in Syria,” Austin said, including a more inclusive new government led by Prime Minister Haider al-Abadi and “forces on the ground we can work with.”

Only a few weeks ago, Austin’s boss, Gen. Martin Dempsey, said it would be necessary to field 12,000 to 15,000 Syrian forces to recapture territory from IS in that country. President Barack Obama's administration has pledged to help train and equip only 5,000 opposition fighters — an effort that has scarcely begun.

Meanwhile, FSA forces are suffering major setbacks in efforts to combat both IS and Jabhat al-Nusra, al-Qaeda’s official affiliate in Syria. Fred Hof, a former US official dealing with Syria, told Al-Monitor after Austin’s remarks that these losses reflect a lack of prompt US support. “This is what happens when you paint a bull’s-eye on people’s backs,” Hof said.

Austin said his focus was on restoring Iraq’s ability to patrol its border with Syria — a line that IS had essentially erased in declaring a "caliphate" encompassing Sunni areas in both countries.

He said that coalition airstrikes were having an impact without causing significant civilian casualties and that IS “continues to lose capability on a daily basis.”

Asked by Al-Monitor whether US forces are coordinating with Iran to prevent inadvertently killing Iranian advisers in Iraq, Austin said no. However, Iraqis, Kurds and religious leader Ayatollah Ali al-Sistani are believed to have passed messages between the United States and Iran. Iranian officials have suggested that more overt cooperation could be forthcoming if there is a comprehensive nuclear agreement between Iran and the five permanent members of the UN Security Council plus Germany.

“While we remain hopeful [about a nuclear deal] it is unclear how things will play out,” Austin said. “We have to be prepared for what comes next.” Noting US concerns about Iranian activities elsewhere in the region, Austin added, “Our relationship with Iran remains a challenging one.”

Austin acknowledged, however, that Iran-trained Shiite militias in Iraq “to date haven’t engaged any of our troops” in contrast to the past decade when such militias attacked US forces then occupying Iraq.

US, Iraqi Shiite and Iranian interests coincide for now in attempting to roll back the IS advance.

Austin also spoke about developments in other parts of his large area of responsibility, which stretches from Egypt to Pakistan.

He expressed optimism about the recent change of presidents in Afghanistan and the ability of US-trained security forces there to deal with regime opponents as the United States withdraws combat troops. Austin said he was worried, however, about Yemen, where the US-backed government faces challenges from both Houthi rebels and the group al-Qaeda in the Arabian Peninsula (AQAP).

Austin said the Houthis, who occupied the capital, Sanaa, in September, have given given President Abed Rabbo Mansour Hadi an ultimatum to form a new government soon or they will establish an “alternative body.”

“We are in danger of losing a key partner in our counterterrorism fight," Austin said, "and must do what we can to help President Hadi re-establish security.”