US officials downplayed the role of US bases in Iraq to counter Iran after the president pledged to stay in the country to "watch" Tehran’s activities. 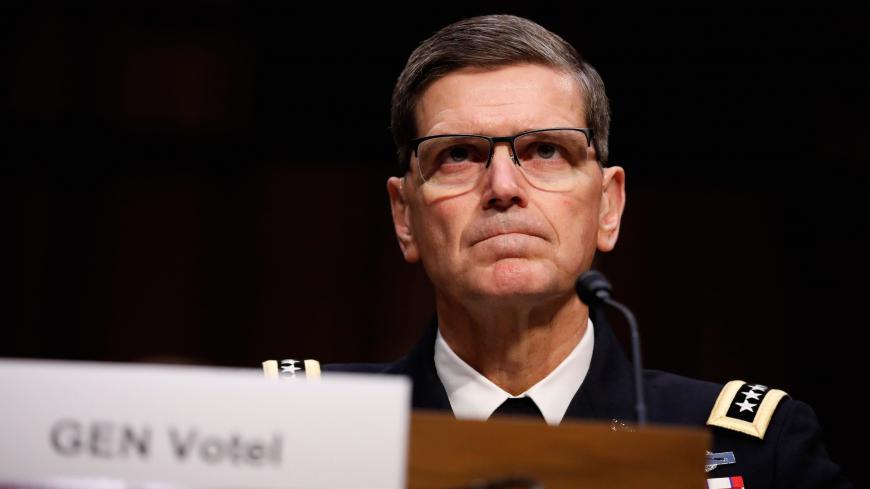 US Army Gen. Joseph Votel, commander of the US Central Command, testifies before the Senate Armed Services Committee on Capitol Hill in Washington, US, March 13, 2018. - REUTERS/Aaron P. Bernstein

Top Donald Trump administration officials indicated today that US bases in Iraq would have little role in monitoring Iran-backed proxies after the president vowed in a TV interview that American troops would stay in the country to “watch” Iranian forces.

Iraqi political figures roundly criticized Trump in the wake of a Sunday interview on CBS’ "Face the Nation." President Barham Salih, a longstanding American ally, called the potential action “unacceptable” and insisted the United States hadn’t been granted permission by Baghdad to snoop on Iran.

Testifying before Congress today, just hours before Trump’s State of the Union address, US Central Command chief Joseph Votel said that the Pentagon’s mission focusing on the defeat of the Islamic State (IS, also known as ISIS) had not changed despite the administration’s focus on curtailing Iran’s use of Shiite proxy groups in the Middle East.

“The government of Iraq understands the relationship, the view that we have on Iran and understands our concerns with Iran," Votel said.

Speaking to reporters on Monday, State Department officials likewise insisted that the 5,200 or so US troops in Iraq — according to the last official Pentagon count from 2017 — remained focused on that mission.

Trump’s comments come as the Pentagon worries that the US military relationship with Iraq is increasingly “complicated” after May 2018 elections that saw Shiite cleric Muqtada al-Sadr make substantial gains, raising safety concerns for American troops and diplomats. In September, the State Department closed the US Consulate in the southern city of Basra after an Iran-backed group launched a rocket attack against the facility.

“The target was already on US forces in the region,” said Phillip Smyth, a fellow at the Washington Institute for Near East Policy who tracks Iranian proxy groups. Smyth said those militias could potentially threaten American troops with rockets, improvised explosive devices and small-arms fire.

In 2015, al-Asad air base in Sunni-dominated Anbar province — the base Trump indicated could be used against Iran — faced shelling and indirect fire from IS. Suicide bombers snuck onto the grounds soon after, but were stopped by Iraqi troops.

Underlying the safety fears, the Pentagon appears increasingly worried that sectarianism is hampering Iraq’s ability to get its government and security forces in order following IS' defeat.

A Defense Department Inspector General report released on Monday concluded that Iraq’s failure to seat new heads of the Defense and Interior ministries has hampered the rebuilding of Baghdad’s military. Pro-Iran Iraqi lawmakers have proposed nominating Falih al-Fayadh, the leader of the Shiite-dominated Popular Mobilization Units, which Baghdad has struggled to control, for the Interior Ministry post.

Some experts believe that means the extensive effort needed to help the Iraqi army recover from the IS fight should push the Pentagon to keep US troops focused on a training mission instead of hunting down militants.

“US forces are out there moving all over the place when they just need to stay on the bases,” said Douglas Ollivant, a former National Security Council director for Iraq.

Experts who spoke to Al-Monitor said that al-Asad air base would not be enough to counter Iran’s overland and maritime routes into Syria and Lebanon that US officials believe are used to support Shiite proxies. Trump toured the base on Dec. 26 in his first overseas visit to US troops.

“It is well positioned, but an observatory post is likely insufficient to thwart Tehran’s land bridge,” said Behnam Ben Taleblu, a research fellow at the Foundation for Defense of Democracies. “But if the goal is to have the administration’s overall Iran policy be operationalized and effective, it is going to take a lot more than just watching.”

Taleblu said the United States would need to maintain American troops in positions blocking Iranian supply routes and support Israeli strikes on Tehran-backed weapons transfers through Syria to be effective.

The United States also has a large air base in Iraqi Kurdistan, but experts told Al-Monitor it’s not clear that air operations from that site or monitoring from al-Asad could effectively disrupt Iran-backed supply lines, which are strung up along air, maritime and land-based corridors throughout the region.

“I don’t think it is particularly useful in monitoring Iranian activists outside of Iraq or Syria,” said David Witty, a retired colonel in the US Army Special Forces. “Other US bases are better situated for that,” he added, citing American installations such as al-Udeid in Qatar, and a US naval base in Bahrain, where the Pentagon and spy agencies deploy intelligence platforms that can track Iran’s movements.

But even as the administration turns its gaze on Iran, there may be few senior US officials left that have Trump's ear on decisions facing the United States in Iraq and Syria, where the threat of Iran-backed forces continues to loom.

Votel, the departing CENTCOM chief, said in his testimony that the White House did not provide warning ahead of Trump’s decision to pull out of Syria. The administration’s nominee to serve as US envoy to Iraq has yet to have a Senate hearing, leaving less senior State and National Security Council officials in charge of the file.

“The relationship is strong enough to survive something like this,” said Ollivant, the former NSC Iraq director. “It’s kind of the equivalent of being rude to your girlfriend. It doesn’t mean she’s going to leave you, but it doesn’t help.”