US expresses hope troops will stay in Iraq after parliament vote

Iraq's parliament votes for a nonbinding resolution to expel US troops as the United States pauses operations against the Islamic State. 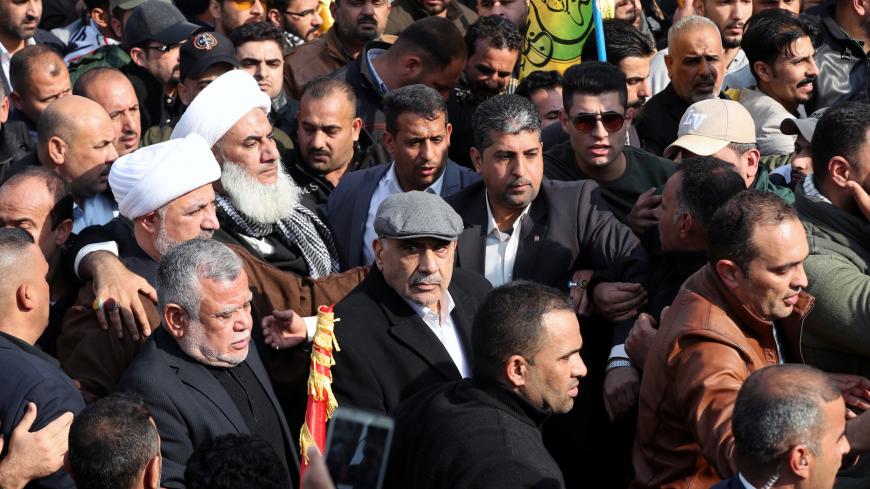 Iraqi Prime Minister Adel Abdul Mahdi (center, wearing gray cap) attends a memorial service in Baghdad on Jan. 4, 2020, for Iranian Maj. Gen. Qasem Soleimani and Iraqi militia commander Abu Mahdi al-Muhandis, who were killed in an airstrike at Baghdad airporton Han. 3. It is up to Abdul Mahdi whether to follow through on an Iraqi parliament resolution seeking the expulsion of US troops for Iraq. - REUTERS/Thaier al-Sudani

The top US diplomat expressed confidence Sunday that 5,200 American troops would be allowed to stay in Iraq, even after the war-torn country’s parliament approved a draft measure to urge the expulsion of US forces.

The vote, the news of which broke as Secretary of State Mike Pompeo was making the rounds on Sunday morning talk shows in Washington to defend the Donald Trump administration’s decision to kill Islamic Revolutionary Guards elite Quds Force chief Qasem Soleimani, is another setback to the US-led campaign to defeat the Islamic State (IS, also known as ISIS) in Iraq.

The Pentagon paused the anti-IS mission Sunday in preparation for possible retaliation from Iran over Soleimani’s death, after Iran-backed Kataib Hezbollah launched two rocket attacks near Iraqi bases where American troops are stationed in Baghdad and Balad.

“This has limited our capacity to conduct training with partners and to support their operations against Daesh [IS] and we have therefore paused these activities, subject to continuous review,” the coalition said in a statement. The decision marks the second time the United States has halted the mission in the past three months; a temporary pause also came into effect after Turkey’s incursion into northern Syria in October.

The United States had already enhanced “security and defensive measures” for American troops in Iraq over the weekend, and NATO said it would suspend efforts to train forces to fight the terror group as it holds an emergency meeting Monday after President Trump and Iranian officials traded public threats to escalate the conflict over the weekend.

But in the immediate aftermath of the Iraqi vote, Trump administration officials tried to make the case that a continued US footprint was still in Baghdad’s interest. Questioned about the provisional Iraqi vote to expel US forces, Pompeo, the top US diplomat, said that the continuing American presence was still in Iraq’s interest, but did not directly address the parliament's action.

“It is the United States that is prepared to help the Iraqi people get what it is they deserve and continue our mission there to take down terrorism from ISIS and others in the region,” Pompeo said. “That is in defense of the Iraqi people and is good for America too,” Pompeo said on CBS' "Face the Nation."

“We are confident that the Iraqi people want the United States to continue to be there,” Pompeo added later on "Fox News Sunday," saying that caretaker Iraqi Prime Minister Adel Abdul Mahdi, who resigned in November amid anti-government protests, is under political pressure to make the move.

Democrats used the Iraqi parliament's vote to counter the administration’s claims that the strike that killed Soleimani had improved US national security. “The mounting evidence two feet in front of your face is that the Soleimani attack has made us less safe,” Connecticut Sen. Chris Murphy told "Face the Nation."

But an Iraqi lawmaker who spoke with Al-Monitor after the vote doubted that Abdul Mahdi would stick to his pledge to expel 5,200 US troops after a Pentagon operation approved by Trump took out Soleimani at Baghdad International Airport early Friday.

“It is just restating [Baghdad’s] position to take care of the situation,” said Sarkawt Shams, a member of Iraq’s parliament, after lawmakers approved the draft bill. The move, Shams said, would make it more likely that US troops would be doing “training, not fighting” as Iraqis intensified security around US bases and the US Embassy.

The nonbinding measure, which will get further consideration in another session of parliament Jan. 11, is “saying US forces should not fight others other than ISIS without permission from [the] Iraqi government,” he said, such as strikes against Iranian militias and Iran-backed Popular Mobilization Units that are not aligned with Baghdad.

To expel American forces, Abdul Mahdi — who remains in power only until a successor is named — would have to send a formal bill to parliament for approval. Such a decision could also be passed on to his successor, experts said. There is not yet a timeline to ascertain the exit of US forces.

The US presence in Iraq is based on an exchange of diplomatic notes between the two nations that remains in place, a senior US defense official said Friday.