Iraqi PM quietly working to keep US troops in country

Iraq’s caretaker prime minister privately does not want US troops to withdraw, several American and Iraqi sources familiar with the situation told Al-Monitor. 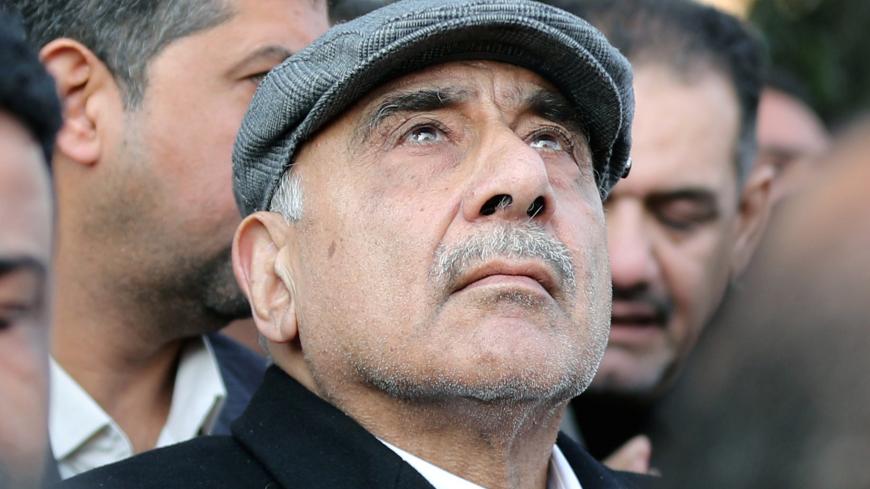 Iraqi Prime Minister Adel Abdul Mahdi attends the funeral of the Iranian Maj. Gen. Qasem Soleimani, head of the elite Quds Force of the Revolutionary Guard, and the Iraqi militia commander Abu Mahdi al-Muhandis, who were killed in an airstrike at Baghdad airport, in Baghdad, Iraq, Jan. 4, 2020. - REUTERS/Thaier al-Sudani

Despite calling on Secretary of State Mike Pompeo to send an American delegation to Iraq to negotiate the withdrawal of US troops in a readout of a Friday call, Abdul Mahdi is trying to find a way to keep an American presence in the country while attempting to placate Iran-backed militia leaders who want to force 5,200 US troops out, a source familiar with the situation on the ground said.

Abdul Mahdi is attempting to “save face,” a former senior administration official told Al-Monitor. “He doesn’t want us to leave.” By demanding a US exit, the former official said, Abdul Mahdi is using “[the] only leverage he has.”

In a heated response to Abdul Mahdi’s statement on Friday, the State Department rejected the caretaker leader’s request for a plan for US troops to exit. "Any delegation sent to Iraq would be dedicated to discussing how to best recommit to our strategic partnership — not to discuss troop withdrawal," spokeswoman Morgan Ortagus said in a statement.

Abdul Mahdi — who resigned in November amid ongoing anti-government street protests — is more likely to ask for US troops to stay in a training role without rules of engagement for combat, the source familiar with the situation on the ground said.

Despite the parliamentary resolution urging the prime minister to rescind Iraq's 2014 invitation to US forces, the government has not officially requested US withdrawal.

But the Iraqi leader has to push back on the American presence to save face with Iran-backed militias, the source said, hiding the US footprint while still getting the support needed for the Islamic State (IS) fight. Abdul Mahdi has balanced his relations with Washington and Tehran, and was informed in advance by each side prior to the strikes on Kataib Hezbollah bases in late December and on bases housing US forces on Jan. 8.

More than 500 people have died since demonstrations began in October, and US and Iraqi sources have raised questions about whether Abdul Mahdi has the authority to expel US troops, and if Iraq can fight IS on its own.

“There is a lot of pressure on him,” said Rehan Hanna Ayoub, a deputy in the Iraqi parliament council and a member of the foreign relations committee. “All data and reports indicate that Iraq is not ready economically, financially or militarily to confront IS and criminal gangs.”

Ayoub, who represents a district in northern Iraq, told Al-Monitor that the situation is not likely to change after an Iranian ballistic missile attack on Tuesday targeted Iraqi military bases in al-Asad and Erbil that house US and coalition troops.

“He is trying to calm down [the] militias for now,” said Sarkawt Shams, another member of Iraq’s parliament. “He knows bad things will happen if US leaves this way,” he added, referring to the possible forceful expulsion of American troops.

US Defense Secretary Mark Esper did not speak to Abdul Mahdi after the Iranian attacks. “We were trying to arrange a quick call, and then I think I was on the line with members of Congress,” Esper said on Wednesday. Al-Monitor subsequently learned that Undersecretary of Defense for Policy John Rood, the agency’s third-ranking official, made the call instead.

Earlier this week, Esper insisted that the vote to urge the expulsion of US forces had showed the support of Iraqis, as most Kurds and Sunnis did not show up. The vote had also been marred by Iran-backed militias forcing Shiite blocs to vote “at the threat of their own lives,” the Pentagon chief said.

As Iraqi protesters took to the streets again on Friday, Abdul Mahdi appeared caught between the need to placate Iranian demands and a desire to keep US forces in the country, lawmakers and sources with knowledge of the situation said.

“My sense is that on a popular and political level is that almost no one wants the troops to leave and they’re going to do this public dance,” said Christine van den Toorn, president of the Iraq Fund for Higher Education. “There’s going to be a reorganization and a back and forth and some kind of shuffling that pleases Iran.”