Pentagon pushed back internally on strike against Iranian military leader

In the days preceding President Donald Trump's order for the drone strike that took out Qasem Soleimani, Pentagon officials were split over whether to carry out the strike. 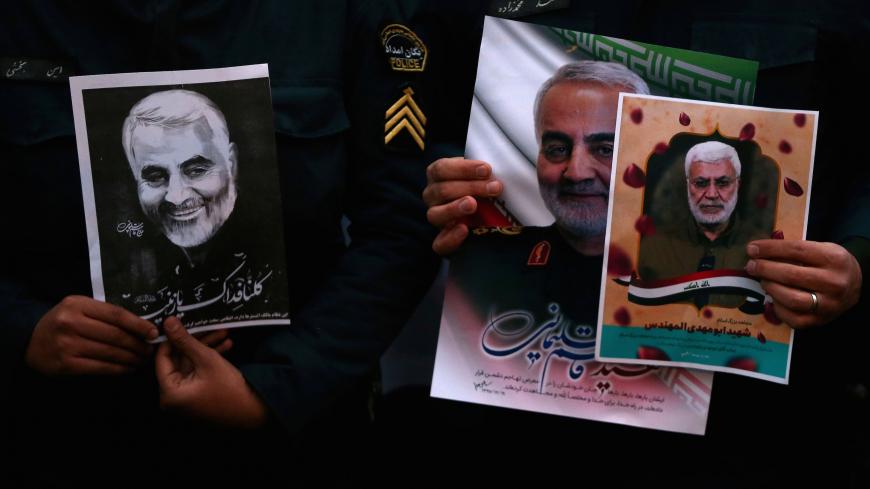 Iranian guards hold a picture of the late Qasem Soleimani during a protest against the killing of Soleimani, head of the elite Quds Force, and Iraqi militia commander Abu Mahdi al-Muhandis, who were killed in an airstrike at Baghdad airport, in front of United Nations office in Tehran, Iran, Jan. 3, 2020. - WANA (West Asia News Agency)/Nazanin Tabatabaee via REUTERS

In the days surrounding President Donald Trump's approval of a drone strike that took out Iranian Quds Force chief Qasem Soleimani, there was internal dissent inside the Pentagon over whether to carry out the strike and if the Pentagon had the legal backing for the move, a former senior administration official told Al-Monitor.

The debate inside the Defense Department centered around fears of a potential escalation with Iran, the official said, after tit-for-tat clashes since May 2019, culminating in suspected Iranian-backed drone and cruise missile strikes against a refining facility in Saudi Arabia in September.

Officials also feared that potential blowback inside Iraq could hamper the US-led campaign to defeat the Islamic State (IS), which the coalition suspended on Sunday amid threats from Iran.

“Some believed it was too escalatory and would not end the threat, some believed we should do it but not in Iraq,” said a former senior administration official with knowledge of the deliberations. “There was dissent on whether to do it, where to [do] it and under what authority.”

Despite internal dissent within the Pentagon over the decision to strike, Trump’s decision was backed by Defense Secretary Mark Esper and Chairman of the Joint Chiefs of Staff Mark Milley, the military’s top officer, the Washington Post reported Sunday.

The former official said the threat to US troops and citizens that prompted a Defense Department drone strike to take out Soleimani was credible, but did not provide further details. The Trump administration ultimately justified the strike under the 2002 Authorization for Use of Military Force that the United States first used to invade Iraq in 2003.

The George W. Bush and Barack Obama administrations had also considered the option of a military strike to take out Soleimani but second-guessed the wisdom of potentially escalating tensions with Iran.

“It’s always been on the table,” a US official told Al-Monitor. “But once you got past all the testosterone BS, rational heads recognized the red line this crossed with Iran and the [blowback] it would create.”

“Make no mistake, this is the quintessential definition of a Pyrrhic victory,” said the official, particularly concerning threats to the US Embassy in Lebanon, where Iranian-backed Hezbollah wields significant influence, and against US forces in Iraq or Israel.

Secretary of State Mike Pompeo — who has led the administration’s public messaging on the strikes — has insisted taking out Soleimani would “de-escalate” tensions in the region, though the United States has already moved or alerted 10,000 troops to the Middle East since the Friday morning strike.

The brewing tensions between the United States and Iranian-backed forces mark a turning point for the Pentagon-led fight against IS, which was paused over the weekend after Iranian-backed Kataib Hezbollah was linked to two rocket attacks on Iraqi bases at Balad and Baghdad, near where US troops are based.

For a time, the United States had kept violence from Iranian-backed militias in Iraq in check as Soleimani, who held significant influence over those groups, turned the focus on Iraq’s fight against IS.

Specifically, the Pentagon leaned on Hadi al-Amiri, the head of the Iranian-linked Badr Brigade, to deconflict airstrikes with Tehran-connected Popular Mobilization Units (PMU) that fought IS near US troops in Iraq’s Tigris and Euphrates River Valleys, officials who served in Iraq told Al-Monitor.

“I used to call it the Soleimani moratorium,” said Sean MacFarland, a retired Army lieutenant general who led the defeat-IS coalition until 2016. “It wasn’t a question of whether or not these Hezbollah and guys like that would start to cause problems for us, it was just a matter of when.”

MacFarland said the United States always questioned how long Soleimani, who had strong linkages with Shiite militant groups, would tolerate a US presence after the defeat of IS. “I felt like they would make that calculation on their own when they didn’t need us anymore,” he said.

The US-backed coalition never had direct lines of communication with the PMU, the official said, relying on the Iraqi army to talk with them and deconflicting indirect weapons fire and airstrikes with terrain features on the ground so as not to accidentally hit Shiite units.

“The Shia [PMU] were minimally trained and controlled but maximally manned and equipped,” the official said. “The lack of professionalism resulted in their employment as occupation troops” to hold ground seized from IS.

But even though Pompeo and Iraqi lawmakers weren’t sure that caretaker Iraqi Prime Minister Adel Abdul Mahdi would follow through on threats to evict 5,200 US troops from Iraq, the departing head of government seemed to stick to that message in meetings with the US administration.

Abdul Mahdi told US Ambassador Matthew Tueller on Monday that both countries should work to implement a nonbinding resolution passed by Iraq’s parliament this weekend to encourage the withdrawal of foreign troops, according to a statement from the prime minister's office.

Without the Trump administration having a frank conversation with Iraqi leadership about a residual American and coalition troop footprint, former officials fear a worst-case scenario: US troops again leaving the country, allowing for the resurgence of IS.

“We’ve seen this movie before,” said MacFarland, the former commander of the defeat-IS coalition. “I think that’s where it’s headed.”