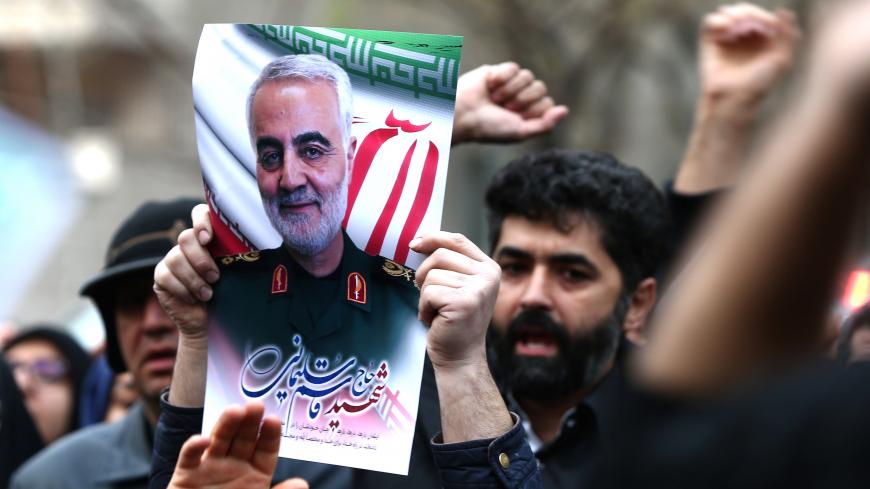 Iranian demonstrators chant slogans during a protest against the assassination of the Iranian Maj. Gen. Qassem Soleimani, head of the elite Quds Force, and Iraqi militia commander Abu Mahdi al-Muhandis, who were killed in an air strike at Baghdad airport, in front of United Nation office in Tehran, Iran Jan. 3, 2020. - WANA (West Asia News Agency)/Nazanin Tabatabaee via REUTERS

The US killing of Islamic Revolutionary Guard Corps' (IRGC) Quds Force commander Qasem Soleimani, as well as four other IRGC commanders and a top Iraqi militia leader, places Iraq at greater risk of instability or even collapse.

Already shaken by a protest movement and relentless Iranian pressure and interference, and with the threat of a resurgent Islamic State (IS), the Iraqi government’s future hinges on what happens next between the United States and Iran.

How we got here: Iran rejects negotiations in favor of "sustained campaign" in Iraq

It was just last month, on Dec. 7, that US President Donald Trump celebrated Princeton graduate student Xiyue Wang’s release from an Iranian jail in exchange for Iranian scientist Masoud Soleimani, with a tweet saying, “Thank you to Iran on a very fair negotiation. See, we can make a deal together!”

The "Swiss track" had promise for further hostage negotiations, but Iran-backed Iraqi militias, despite US warnings, continued to mount what Gen. Mark Milley, chairman of the Joint Chiefs of Staff, the top US military official, called a "sustained campaign" against US assets and interests in Iraq. On Dec. 27, the Iranian-backed Iraqi militia Kataib Hezbollah (Brigades of the Party of God) attacked an Iraqi military base near Kirkuk killing an American contractor and injuring four US soldiers, prompting a US retaliatory strike on Kataib Hezbollah two days later. This seems to have been the catalyst for Trump’s decision to take out Soleimani.

Iranian-backed militias stormed the US Embassy compound on Dec. 31, in response to the US strike on Kataib Hezbollah bases. The drone attack on Soleimani’s convoy Jan. 3 was labelled "a defensive action" to prevent additional "imminent" attacks, as Jack Detsch reports.

There is a range of speculation about when and where Iran may decide to respond. Iran, with its dilapidated navy and air force, would probably be hesitant to provoke a response that allowed the United States to take out its air and naval capabilities, as happened in 1988, accelerating Iran’s decision to end the Iran-Iraq War. Nor is it the Iranian style to prepare for land armies to clash on the battlefield, which is not the present style of warfare in the region.

Iran’s preference is asymmetry — car bombs, assassinations and other irregular tactics — taking its time and avoiding fingerprints. Recall the 1992 attack on the Israeli Embassy in Buenos Aires. Iran still denies its role in the drone/missile attack on Aramco facilities in September 2019.

The United States has bolstered its dominant military assets in the region, adding 15,000 troops since May, including 750 Marines and soldiers sent to protect the Baghdad embassy this week, as well as another 3,000 deployed to Kuwait.

The take here is therefore that Iran’s first move would likely be to secure its base — Iraq, Syria and Lebanon — before making its next move. These are the countries where Iran has invested the most, and where they can’t afford to lose.

The Iraqi parliament may seek to legislate the withdrawal of the approximate 5,000 US forces from Iraq — a longstanding objective of Iran. If so, the loser will the Iraqi Security Forces and the winner will be IS.

If it happens, the Trump administration may seek to reposition some or all US forces in Iraqi Kurdistan, which in principle would be welcomed by the Kurdistan Regional Government. With such a deployment, the Kurdistan Region could become more vulnerable, not less, to Iranian intrigues.

Iran’s heavy hand in Iraq hasn’t been able to stifle a distinct and growing nationalist trend among Iraqi leaders and protesters. Salih has been trying to build a consensus among Iraqi politicians and the pro-democracy/anti-Iran movement anchored in Tahrir Square to chart a course for reform, although this task just got a lot harder. Salih’s efforts, and Sistani’s calls for moderation, remain vital to keep Iraq together, if the United States and Iran can avoid further hostilities. Sadr, for his part, has rallied his militia, the Mahdi Army, and supporters, and will look to position himself as a broker between Tehran, the government and the street.

Iran’s flagging reputation in Iraq, and fear of further US actions, might give it pause if it is considering a violent response, as signaled by Iran and some of its proxies in Iraq. This powerful Iraqi nationalist and anti-Iranian trend can’t be dismissed. If Iran pushes too hard, the consequences of state collapse will redound negatively to it and its proxies. The Iranian-backed militias’ siege of the US Embassy compound was a flop inside Iraq. “Public opinion has turned against Iranian forces in Iraq, especially since the beginning of anti-government protests on Oct. 1, which militias close to Iran were accused of being involved in killing protesters and abducting large numbers of them,” Ali Mamouri reports. The Tahrir Square protesters denounced the Green Zone siege, saying, “We are not a part of these protests and we will continue protesting against the government until they fulfill their demands.”

Iran also took the Trump administration’s restraint for granted. The killing of Soleimani and his comrades was brilliant execution by US Special Operations Forces. The burden of fear for further US retaliation should weigh heavily in Iran.

Time to deconflict in Iraq … before it’s too late

Trump said today he does not "seek regime change" and US Secretary of State Mike Pompeo has made clear that the United States is looking to de-escalate the situation with Iran. Tehran should pause rather than lash out, however strong the passions may be in Iran.

There has been a fair bit of shuttling and backchanneling among the United States, Iran and regional powers — including by Japan, Oman, Pakistan and Switzerland, as well as Iraq itself — and these good offices should be utilized, as the International Crisis Group suggests, to work out a modus vivendi around “a stable Iraq that neither fully controls as a buffer between them.”

The Trump administration and the Iranian government should keep the door open for diplomacy, or at a minimum, to convey messages with Iran for deconfliction in Iraq.

That may seem aspirational, or even unrealistic given events of the last 24 hours, but it’s a worthy cause, if a thin reed. The United States has invested over $1 trillion and over 5,000 lives in Iraq. The Iraqi protests are an inspiration to the region, and the Iraqi people deserve a chance to chart a course free of regional conflicts.