The Trump administration tells Iraq it faces a 'decision point' in choosing America or Iran. 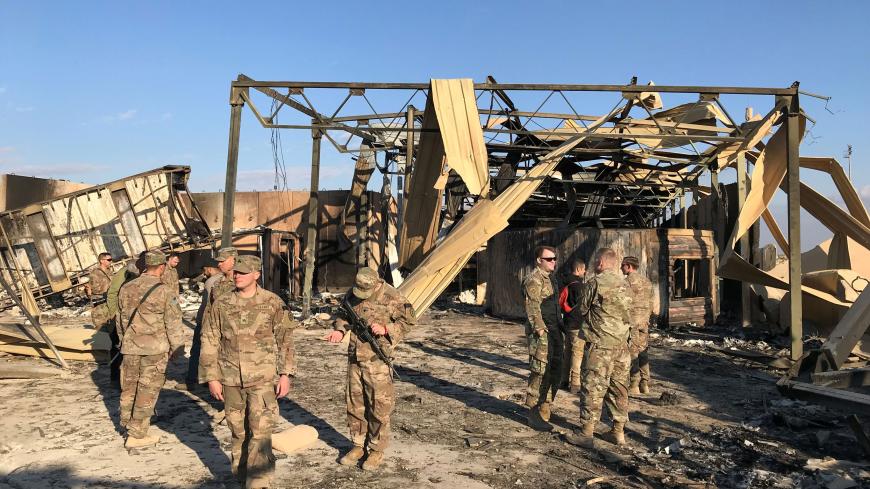 There is something austere these days in the US approach to Iraq. The diplomatic pleasantries and talk of "strategic partnership" are crowded out by matter-of-fact demarches and warnings. And there’s no mystery why. Iran has made Iraq a battlefield. Iranian backed militias in Iraq have killed Americans, twice, in December and again this month. American forces have been injured by Iranian or Iranian proxy attacks. Also in December, Iran-backed militias organized crowds to attack the US Embassy in Baghdad, and Iraqi security forces were initially nowhere to be found.

“The Iraqi government is at a decision point,” US Assistant Secretary of State for Near Eastern Affairs David Schenker said last week.

US policy toward Iraq is now a variation of "us or them," with "them" being Iran. The future of the US-Iraq relationship depends on Iraq’s choices. There can be no claims to Switzerland-like neutrality. The Trump administration has so far shown unusual restraint and empathy with Iraq’s plight. It knows Iraq can’t change its border with Iran, and an all-out conflict is in noone's interest. But when Americans are killed and US embassies are under siege, there is an inevitable reckoning.

US shift to military deterrence

Both Washington and Baghdad want the US-Iraq security relationship to continue. Even those Iraqi politicians who may take a nationalist tone and hedge publicly, in private often value the partnership.

In 2014, the brutal Islamic State (IS) caliphate ruled large swaths of Iraqi territory. Last year, the Trump administration announced the territorial defeat of the IS caliphate in Iraq and Syria. As we wrote in January, this success of both the Obama and Trump administrations often doesn’t get the credit it deserves.

Iran, in contrast, exploited the IS crisis to advance its own sectarian agenda, embedding itself even more deeply in Iraq’s security and other institutions, compromising Iraqi sovereignty.

The need to defeat IS brought US forces back to Iraq; recall the US had left in 2010. While the United States, Iraq and partner nations agree on the need to stay engaged against IS, there is no guarantee of the perpetuity of the US-Iraq security partnership beyond the counter-IS mission. In that context, the relocation and consolidation of US military personnel and equipment and the transfer of control of some bases to Iraqi security forces should come as no surprise.

The US use of force in Iraq against Iran and its proxies has been calibrated to deter, not to escalate. The recent cycle did not start with the US killing of Islamic Revolutionary Guard Corps Quds (IRGC) Force Cmdr. Qasem Soleimani and Iraqi militia leader Abu Mahdi al-Muhandis in a drone and missile strike in Iraq on Jan. 3. Those who seek to blame the Trump administration on that score often forget or glide over the Iranian-backed attacks that killed an American on Dec. 27 and the protest at the US Embassy on Dec. 31.

Following the March 12 militia attack on Iraq’s Camp Taji military base, which killed two Americans, US Secretary of State Michael Pompeo told Iraq’s caretaker Prime Minister Adel Abdul Mahdi that Iraq must defend US and coalition personnel and the groups responsible for the attacks “must be held accountable.” If not, the United States would continue to take matters into its own hands, meaning striking back militarily.

Iraqi President Barham Salih referred to the attacks on Taji as terrorism, adding later that US retaliatory strikes represented a “grave and systemic weakening of the state's ability and reputation” and risked plunging Iraq into “chaos and violence.”

In a prescient interview, just days before the mass demonstrations began in Iraq on Oct. 1, Salih told Al-Monitor that providing job opportunities for Iraqi youth was an urgent priority. In his speech to the UN General Assembly, he labeled corruption as the “political economy of conflict."

Salih has sought to move toward a program of reform, managing the expectations of protesters within the constraints of Iraqi politics.

And this already nearly impossible task just got harder, with the onset of the COVID-19 pandemic and the drop in oil prices.

Omar Al-Jaffal reports on the government’s challenges in enforcing its policies to mitigate spread of the coronavirus, now at 458 cases and rising fast, with 40 deaths as of March 27. The United States is providing $670,000 to help Iraq battle the virus, Bryant Harris reports.

Mustafa Saadoun explains the looming budget crisis as the draft 2020 budget, which is pending before parliament, is $135 billion with a $40 billion deficit, based on a selling price of $56 per barrel of oil. However, oil prices are now close to half that.

The Iraqi state’s fragility, and potential failure, cannot be ruled out.

Getting rid of the bad blood

In the movie "The Godfather," mafia captain Peter Clemenza explains at one point that from time to time, "things gotta happen … to get rid of the bad blood.”

In Iraq, that bad blood is Iranian-backed militias and corruprion. A sovereign Iraq can’t have its territory used by Iran to attack Americans or as an ammo dump or highway to buck up Syrian President Bashar Al-Assad and Hezbollah.

And the long game of Iraqi reform can’t be disentangled from the malign and corrupt influence of Iran. Iraq’s protesters get it. Their message has been for an end to corruption and Iranian influence. Demonstrators have attacked the offices of pro-Iran parties and militias, Ali Mamouri reports. More than 600 protesters have been killed and thousands injured by Iraqi security forces and pro-Iran armed groups since demonstrations started in October 2019.

Iran, of course, is not giving up Iraq without a fight, as we explained here in November. Iraq is considered the most vital of Iran’s national security priorities. Tehran and its proxies are willing to tolerate a high degree of violence on Iraqi soil and rule amidst the ruins if it were to come to that.

The Trump administration, for its part, is also not giving up on Iraq and, as mentioned above, is not unsympathetic to its challenges. But Washington is looking to Iraq to make some tough choices. The Trump administration this week extended sanctions waivers for Iraq for its electricity needs (Iran has had a stranglehold on Iraq’s electricity sector), while sanctioning 20 individuals and groups that are linked to the IRGC and other Iran-backed terrorists and armed groups in Iraq, including those involved in Iraq’s electricity sector.

One benchmark will be whether Prime Minster designate Adnan al-Zurfi, reportedly opposed by Iran’s allies in Iraq, can form a government by April 17. If so, said Schenker, “A government that prioritizes Iraq and heeds the legitimate demands made by Iraqis for a sovereign and corrupt-free nation will receive US and international support.”