US pushes Iraq to integrate Iran-backed PMU militias after strikes

The Donald Trump administration is calling on Iraq to demobilize Iranian-backed Popular Mobilization Units after renewed rocket strikes hit near the US Embassy in Baghdad. 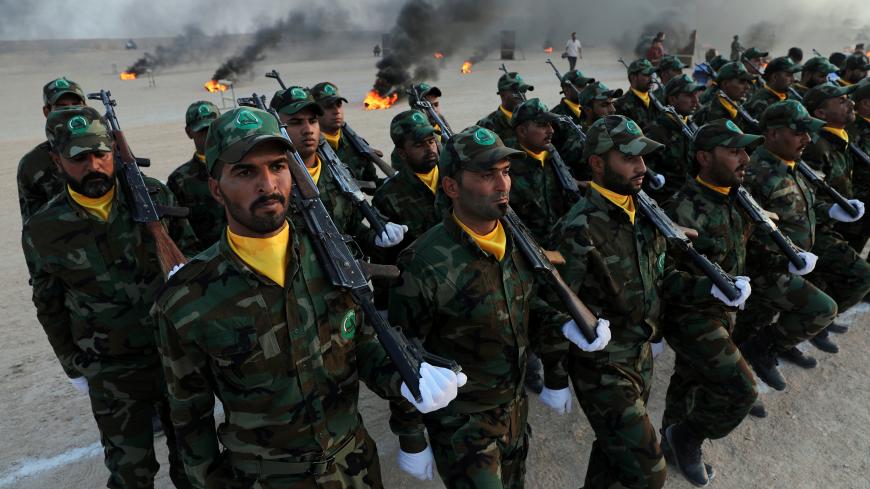 The Donald Trump administration is calling on Iraq to keep up efforts to demobilize Iranian-backed militias after a volley of rockets attributed to Popular Mobilization Units struck near the US Embassy Sept. 24 despite Baghdad’s efforts to rein in the groups.

In a statement provided to Al-Monitor, Mick Mulroy, deputy assistant secretary of defense for the Middle East, expressed the Pentagon's concern that the militants are operating “semi-autonomously” and “destabilizing the liberated areas and prioritize extortion for personal gain over fighting ISIS.” The rocket attacks into Baghdad’s fortified Green Zone were the first such strikes since May.

The PMU consists of as many as 40 groups under Iraqi and Iranian authority, the Pentagon says, possibly totaling some 160,000 fighters. Iraq’s government issued an executive order in July to bring Iranian-backed factions of the PMU under Baghdad’s control, and the United States plans to assist with identifying elements that will be demobilized.

Mulroy, who is set to leave the Trump administration next month, called Prime Minister Adel Abdul Mahdi’s order to rein in the group “an important step towards ensuring Iraq's future as a strong, sovereign, unified, democratic, and prosperous state.” The Pentagon’s top Middle East policy official cautioned, however, “Implementation of the decree will be key, and we will continue to engage with the Government of Iraq on the need to enforce this Executive Order.”

Abdul Mahdi has faced political headwinds from Shiite parliamentarians in his effort to bring the militant units under full Iraqi control. Parliament deputy Ahmed al-Asadi, a former PMU spokesman, called the group a “pillar” in Iraq’s internal security system, speaking at a Baghdad conference Sept. 27 on a panel with the British ambassador to Iraq.

“Talking to a lot of Iraqis, every one of them said the same things: ‘This is a very controversial issue. This is a very sensitive issue,’” said Barbara Leaf, former US ambassador to the United Arab Emirates under the Barack Obama and Trump administrations. “The government recognizes the need to push forward, but they’re going to have to do it in an Iraqi way, over a much longer timeline.”

While the Treasury Department slapped new sanctions on PMU leaders who participated in the fight against the Islamic State (IS) in July, the Pentagon has taken a more cautious approach in dealing with the Iranian-backed units. Calling for Iraq to rein in the groups, Mulroy said that the PMUs played a “critical role” in pushing back IS, which Baghdad declared defeated in 2017, distinguishing mainstream units from Iranian-funded troops that the United States accuses of extracting money from Iraqi civilians.

Beyond the political fray, the 5,200 American troops fighting in Iraq also contended with PMUs on the battlefield during the IS fight. As the US-led coalition in Iraq took on IS in populous cities such as Baiji and Fallujah, for instance, the Pentagon had to deconflict airstrikes with the positions of PMU forces through interlocutors like Badr Organization chief Hadi al-Amiri, Al-Monitor reported in July. Experts say the so-called Iranian-backed special groups have expanded by a factor of 15 over the past decade.

The expansive presence of the PMU across Iraq has complicated efforts to rein in the group, as the United States prepares to deploy more forces to the region after alleged Iranian attacks against Saudi oil facilities earlier this month. The Washington Post reported on Sept. 27 that top Iraqi officials, including Mahdi, had been embarrassed by revelations that PMU militias had played a role in May drone strikes against a Saudi pipeline.

Even as tensions rose over the summer in the Middle East, Iraq sought to steer clear of the conflict between Iran and Saudi Arabia, with top officials describing its foreign policy as one of “proactive neutrality.”

Iraq has cultivated billions of dollars in investments from Riyadh, while Mahdi has simultaneously offered to mediate Tehran’s tensions with Washington during a July trip to Iran. The Iraqi prime minister also visited Saudi Arabia in the wake of attacks on the Abiqaiq oil facility. While forcing other nations to zero out oil imports from Iran, the Trump administration has continually extended sanctions waivers to allow Iraq to import power-generating natural gas from its neighbor.

After rolling back IS, Iraq has been nervous about becoming embroiled in another regional conflict, former US officials say.

“There’s [a] fairly concealed nervous anxiety about the proximity of the direct conflict between the US and Iran and [of] Iraq being caught in the middle,” said Leaf, now with the Washington Institute.