Baghdad is worried that the Sept. 14 attack on Saudi Arabia will affect Iraq's stability and relationship with neighboring countries. 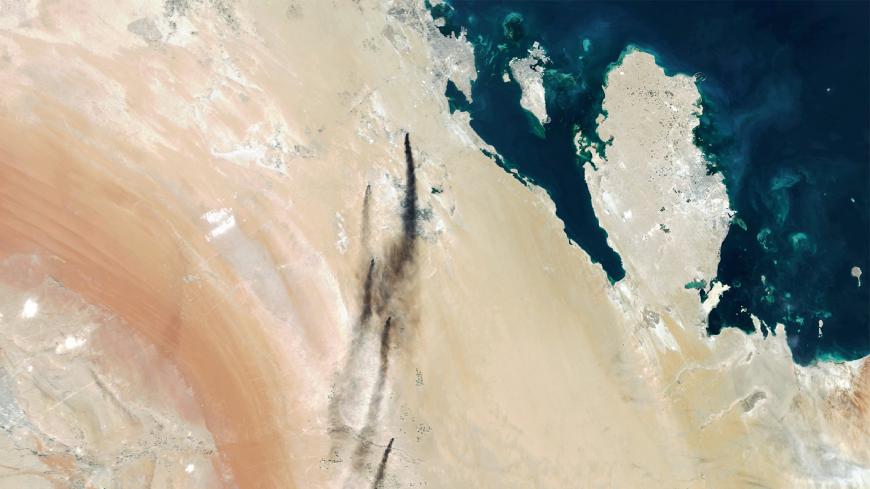 Attacks that occurred Sept. 14 against Aramco oil processing facilities in Saudi Arabia, resulting in huge fires and halting near half of the supply from the largest oil exporter in the world, could have a major effect on Iraq.

Soon after the attacks, Yemen’s Houthi rebels took responsibility, saying they used 10 drones in the strikes. However, Middle East Eye quoted an unnamed Iraqi intelligence official as saying the strikes were launched by Iranian drones using Iraqi territory. Middle East Eye added that the attack was in revenge, occurring out of the belief that Riyadh funded Israeli drone attacks that have taken place in recent months on Iraqi Popular Mobilization Units.

Iraqi Prime Minister Adel Abdul Mahdi issued a statement Sept. 15 denying “what has been circulated by some media outlets and social media about the use of its territories to attack Saudi oil facilities with drones.”

The statement said Iraq “affirms its constitutional commitment to preventing the use of its territories for aggression on its neighbors, brothers, friends and that the Iraqi government will deal firmly against anyone who tries to violate the Constitution.”

Abdul Mahdi’s office said Sept. 16 that US Secretary of State Mike Pompeo, in a phone call with Abdul Mahdi, confirmed Baghdad’s denial. “The US secretary of state said the information they have confirms the Iraqi government’s statement that its territory was not used to carry out this attack,” the office said.

This comes in conjunction with Iraq's signing a framework agreement with the Gulf Cooperation Council to import 500 megawatts of electricity through a networked system involving Gulf Cooperation Council countries to cover areas in southern Basra province, 550 kilometers (340 miles) south of Baghdad. The report of Iraqi involvement in the Aramco attack could affect this deal, with Iran possibly gaining if it instead were to provide Iraq with the needed electricity.

The attack also comes at a time when Iraqi Shiite cleric Muqtada al-Sadr is visiting Iran; he attended Iranian Supreme Leader Ali Khamenei's Ashura assembly. Iraqi involvement in the attack would not only damage the rapprochement between Iran and Sadr, but would likely lead Sadr to issue even harsher criticism against Iran.

Despite Sadr's efforts to convince Iran to rein in militias it backs in Iran, pro-Iranian PMU factions have been increasing their activities.

PMU Brigades 41 and 43 said Sept. 15 that they had prevented a drone from getting close to their bases.

Moreover, even though PMU head Faleh al-Fayadh denied that the PMU would be forming an air force, a man appointed to head the force by PMU deputy Abu Mahdi al-Muhandis has been issuing statements and giving orders. This means that the PMU air force has been already formed and is continuing its work under deep Iran influence.

The criticisms against the Saudis by Iran and its proxies have been very sharp recently. Khamenei's official website published a religious recitation slamming Saudis for their involvement in Yemen, referring to the Houthis as being God’s men who have broken Satan's horn.

Almost all of the websites of pro-Iranian PMU factions in Iraq have extensive content against the Saudis and supporting the Houthis in Yemen. In 2016, an official Houthi delegation visited Baghdad, meeting with PMU leaders and then Iraqi Foreign Minister Ibrahim al-Jafari.

Although all the above indications do not provide sufficient evidence that Iraqi territory was the origin of the Sept. 14 attack against Saudi Arabia, they definitely make Iraqi officials worry about the consequences of such a strike.

That is why Abdul Mahdi was very quick to form a special committee to investigate the reports about Iraqi involvement in the attack. “A committee was formed from the relevant Iraqi parties to follow up the information and developments,” Abdul Mahdi said.

“Iraq calls on all parties to cease mutual attacks and to [prevent the] great loss of life and facilities. The Iraqi government affirms that it is following these developments with great interest,” he added.

What is worrying for Iraqi officials is that pro-Iranian PMU factions have not denied involvement in the attack. This is despite the fact that Iran itself denied any involvement.

Al-Monitor has learned from a source in the prime minister's office that Abdul Mahdi has already contacted PMU groups, asking them to cooperate fully with the special committee he has formed for the investigation about the report of Iraqi territorial involvement in the attack against Saudi Arabia.

This all indicates that any escalation between Saudi and Iran could broadly affect Iraq, making it a possible front if there is an escalation. This will likely continue as long as the government fails to completely control the PMU and impose central authority on all forces in the country and its territory.