Following Qasem Soleimani's assassination in Iraq, there has been heightened concern about an Iranian reaction. But due to Tehran's economic hardship, decreased support from the public in Middle East societies and international isolation, Iran isn't likely to seek revenge militarily against the United States. 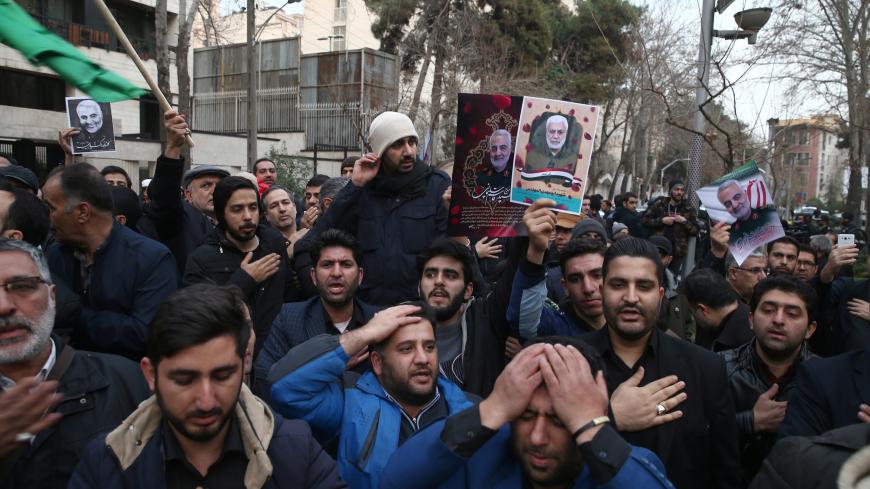 Iranian demonstrators react during a protest against the assassination of Iranian Maj. Gen. Qasem Soleimani, head of the elite Quds Force, and Iraqi militia commander Abu Mahdi al-Muhandis, who were killed in an airstrike at Baghdad International Airport, in front of United Nations office in Tehran, Iran, Jan. 3, 2020. - WANA (West Asia News Agency)/Nazanin Tabatabaee via REUTERS

Not only Iraqis, but the whole world was shocked by the assassination of the commander of Iran's Islamic Revolutionary Guard Corps' (IRGC) Quds Force, Qasem Soleimani, and his right-hand man, Abu Mahdi al-Muhandis, who was the deputy head of Iraq’s Popular Mobilization Units (PMU). This event, without a doubt, will change the map of conflict in the region.

The attack took place around 1 a.m. on Jan. 3 near the Baghdad International Airport. Soleimani had just arrived in Baghdad and had gotten into a vehicle, but his convoy was struck by drones before it had left the airport grounds. Soleimani, Muhandis and six other PMU figures were killed immediately.

A few hours later, the IRGC announced that four other IRGC generals were killed in the attack as well.

This presence of this number of important people altogether indicates that they had been planning something very big, probably against the US after the latter attack on PMU bases in northern Iraq and Syria. This was what US officials confirmed as well. US President Donal Trump said "We took action last night to stop a war" and Lindsey Graham, one of Trump's main congressional advisers, called the operation a "preemptive, defensive strike planned to take out the organizer of attacks yet to come."

The operation was very well planned, organized and executed. The United States had access to very sensitive information and likely had been tracking Soleimani's movements and activity for a long time.

The scene was indeed set perfectly. Washington could not have chosen a better time, as after a series of protests from Baghdad to Tehran and Beirut, Soleimani had lost some public support and was seen as part of Iran's suppression system against people and their free wills. The attack on the US Embassy in Baghdad had also turned the majority of Iraqi political forces and the international community against Soleimani as the highest — albeit unofficial — leader of the PMU. The location turned out to be perfect as well. The strike took place in Iraqi territory, raising questions among the Iraqi public about the reason for an Iranian general being present in Iraq, especially after accusations facing Iran-backed forces of killing Iraqi protesters and abducting many of them. Selecting a quiet place in the airport also prevented the killing of any civilians that might allow Iran to victimize themselves and demonize the United States.

The reaction of the Iraqi public was not as strong as Iran might have expected. The president, prime minister and most of the Iraqi political parties — including Sunnis, Kurds and Shiites, among them Muqtada al-Sadr's and Ammar al-Hakim's movements — only denounced the event, calling all involved parties in Iraq to be patient and avoid any clash on Iraqi territory.

"In this exceptional circumstance, it is the duty of the Iraqis to adhere to their unity, close ranks and transcendent disputes in order to protect the supreme national interests, and to protect the sovereignty and security of the country and spare it the scourge and tragedies of armed conflicts that have worn it over four decades … and its effects and wounds are still not healed," Iraqi President Barham Salih said in his statement.

Meanwhile, top Shiite cleric Ayatollah Ali al-Sistani, during his representative Friday sermon, also condemned the assassination and called it a breach of Iraqi sovereignty. Yet at the same time, Sistani called upon all parties to have a high degree of patience and avoid pushing the country toward the abyss.

The PMU announced it was on the highest state of alert. As announced, Soleimani's funeral will be held in Baghdad Jan. 4, and then his body will be transferred to Tehran.

In Iran, the government called for mass protests to show support to the regime and condemn the incident. Soleimani, due to his great influence in the region, is probably the most respected figure in the country — even among the people who do not support the Islamic regime.

Sadr, who has been living in Iran since the beginning of the protests Oct. 1, activated his Mahdi Army and called upon his followers to be ready for any necessary action to protect Iraq from any possible conflict. At the same time, he called on all parties to be patient and avoid bringing any regional conflict into the country.

In terms of Iran's reaction, all influential parties in Iraq are calling for restraint and patience. Even the pro-Iranian groups, although calling for strong revenge, are simultaneously beseeching all sides not to escalate the conflict in Iraq.

Iran's Supreme National Security Council had its special meeting about the incident, which was led by Iranian Supreme Leader Ayatollah Ali Khamenei for the first time. The council announced after the meeting that “Iran will take revenge at the suitable time and place,” which indicates Iran is not willing to escalate in the near future.

In fact, the economic hardship in Iran — in addition to the challenges the government is facing internally — would not allow Tehran to increase the tension. Iran’s past conduct against Israel strikes on Iranian bases in Syria also shows it will not seek revenge if its national security and interests are in danger.

From the US side, Secretary of State Mike Pompeo called for reducing the escalation, saying, “I reiterated our commitment to de-escalation.” US President Donald Trump also indicated that Iran should take up negotiation instead of confrontation, tweeting, “Iran never won a war, but never lost a negotiation!”

This all indicates that Iran and its proxies in the region most likely would not seek revenge in the near future and — in regard to Iraq, in particular — would not lead Iraq to fall into a civil war or mass destruction, because it would lose even more in Iraq if it takes such a risk.

Iran is also very unlikely to push its Iraqi political forces to go ahead with legislation asking US troops to leave the country, as this would raise strong objections from Kurdish and Sunni forces and push them to work for separation. Iran would be the first party affected by such a dangerous move.