The Iraqi judiciary resumed its work the day after powerful Shiite cleric Muqtada al-Sadr ordered his supporters to withdraw from the Supreme Judicial Council. 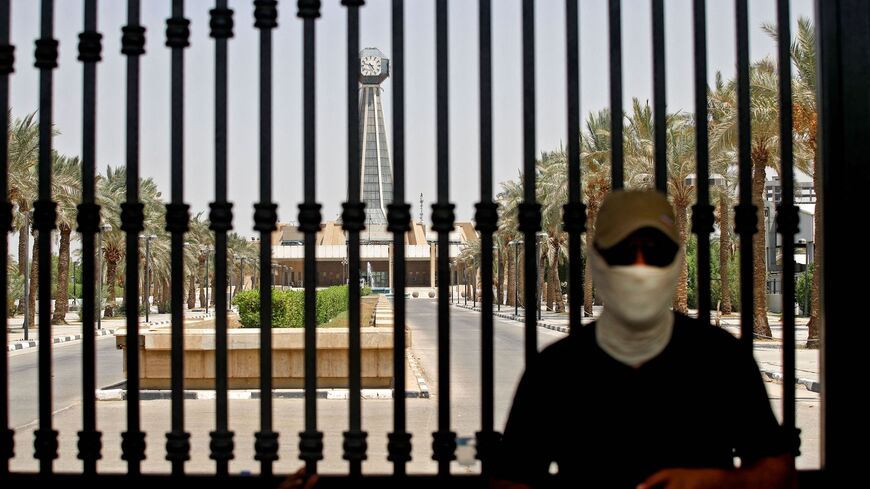 A man stands outside the headquarters of the Supreme Judicial Council, Iraq's highest judicial body, in Baghdad on Aug. 23, 2022. Sadrists, who have already been camping outside parliament for the past three weeks, pitched tents outside the gates of the body's Baghdad headquarters with placards demanding the dissolution of parliament and new elections. - AHMAD AL-RUBAYE/AFP via Getty Images

BAGHDAD — Protest tents of rival Shiite political and armed factions remain near the Iraqi parliament and across the Tigris River as threats and a growingly intractable political situation cast a shadow over the country’s leaders and its future.

On Aug. 23, Prime Minister Mustafa al-Kadhimi cut short an official trip to Egypt to return to the Iraqi capital after a protest began at the Supreme Judiciary Council.

Courts across Iraq were temporarily shut down as a precaution after supporters of powerful Iraqi Shiite cleric and armed faction leader Muqtada al-Sadr stormed the premises of the country’s top judicial bodies, demanding they dissolve the parliament to be able to move toward fresh elections and decrying both corruption and the alleged politicization of the judiciary.

The Iraqi judiciary resumed work the following day after Sadr ordered his supporters to withdraw from the Supreme Judicial Council.

No government has yet resulted from the elections held over 10 months ago, which saw a dismally low voter turnout.

Sadr’s Iran-linked Shiite rivals in what is known as the Coordination Framework (CF) had already made it clear that they supported head of the Supreme Judicial Council Faiq Zaidan, holding aloft placards earlier in the month with his image on it, as seen by Al-Monitor in Baghdad.

They reacted strongly to the protest by their Shiite rivals, making it clear that they were willing to resort to violence to protect the country’s judiciary. Many leaders of Iran-linked factions including Asaib Ahl al-Haq leader Qais al-Khazali spoke out firmly in favor of the “independence” of Iraq’s top judicial bodies.

Photos of arrest warrants, travel bans and seizure of funds issued by the judiciary against members of the movement under Sadr after the protest at the Supreme Judicial Council circulated online.

One official working in Baghdad who has multiple contacts within the justice sector had claimed to Al-Monitor prior to the current political unrest that Zaidan was well known in some circles for his links to armed and political factions close to Iraq’s eastern neighbor. The official, who had spoken on condition of anonymity as he had not been authorized to speak to the media, claimed that his holding of the position was one of the reasons the judiciary continued to be seen as lacking independence.

The Iraqi judiciary has also been criticized in recent months for alleged bias in the case of rulings concerning the Kurdistan Region of Iraq and oil resources.

A statement issued after the meeting stressed that "the duty of the security forces in all their formations is to protect stability in the country and preserve public security and public property," adding that "the forces need not be involved in political disputes and that preserving the security and rights of Iraqis is the responsibility of the state and its constitutional institutions."

It also noted that "the continuation of the state of political turmoil negatively affects national efforts aimed at consolidating security and stability and preserving the security and safety of citizens.”

Prior to the meeting, a statement had been issued by the country’s Popular Mobilization Units (PMU) that had notably called the protest at the Supreme Judicial Council a “siege” by “organized groups, including armed men.”

The reference to the alleged presence of armed men seemed to some to be a misrepresentation of the thus-far peaceful protests conducted by the Sadr supporters and potentially incitement to further escalation.

The statement from the Aug. 24 meeting seemed to reference it in ordering the security forces not to get involved in political disputes.

The prime minister soon reacted to the PMU statement, saying in another statement issued by his military spokesman, Yahya Rasoul, “Iraqi security and military forces will not be drawn into political conflicts and will not be a party to them." He added, "Apply the harshest legal penalties against any Iraqi security and military members who violate the instructions in this regard.”

Kadhimi “stressed that the security and military institutions are prohibited from issuing any statement of a political nature or representing an insult or an insinuation that a military or security institution is not committed to the standard procedures.”

The leader of one of the Iran-linked factions known for being active in both Syria and Iraq also seemed to threaten Kadhimi in an Aug. 23 tweet in addressing “the brothers, the leaders of the CF,” calling for “killing the camel before it is too late.”

Kataib Sayyid al-Shuhada (KSS) commander Abu Alaa al-Waeli’s tweet did not explicitly state that he was referring to Kadhimi as “the camel,” but it seemed to imply this. Part of KSS has been incorporated into the PMU and receives government salaries.

Earlier in the day, the KSS commander tweeted that the “judiciary is the guarantor of Iraq’s sovereignty” and that the group would protect its “independence and ensure its survival.”

Kadhimi was targeted by an alleged assassination attempt in November 2021.

Many of the CF accuse Kadhimi of supporting Sadr and of being complicit with the United States in its January 2020 assassination of Iranian Gen. Qasem Soleimani and the top Iraqi militia commander who worked closely with Soleimani, Abu Mahdi al-Muhandis, in a drone strike just outside the Baghdad airport.

Both of the men killed were seen as heroes by many in the CF. Billboards depicting the two embracing or commanding troops in battle adorn many major streets throughout the country, from the oil-rich city of Kirkuk to the southern port of Basra, including in Baghdad’s Green Zone and on the road to the airport.

Meanwhile, tit-for-tat attacks between Iran-linked armed factions and US forces have increased across the border, injuring three US servicemen and reportedly leaving multiple members of the armed factions on the ground dead.

Most of these Iran-linked armed groups consist mainly of Iraqi nationals and have long used Iraq’s western border to smuggle weapons and allegedly other illicit goods into and out of Syria, increasing risks to Iraqi security as well.