Tension remains high in Iraq as leaders try to reassure the international community after dozens were killed. 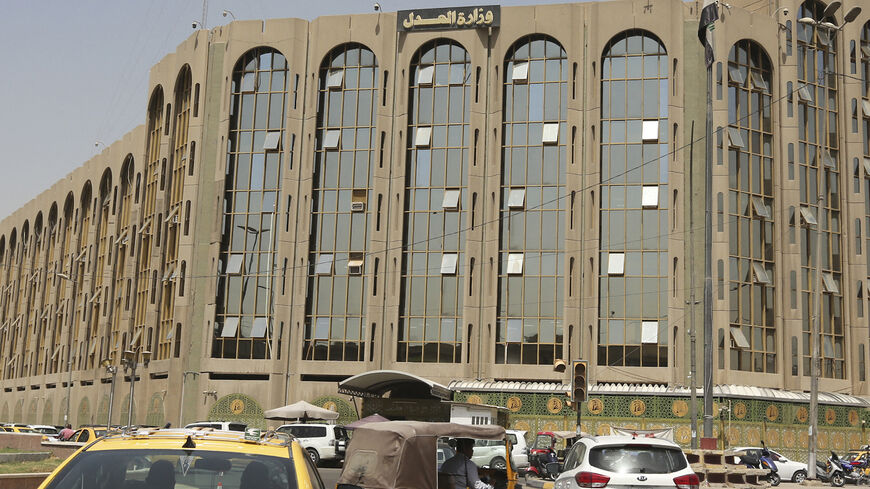 A picture shows traffic back to normal outside the Ministry of Justice in Baghdad, on Aug. 31, 2022, as calm returns after around 24 hours of deadly violence in Iraq. - SABAH ARAR/AFP via Getty Images

BAGHDAD — The Iraqi government held its second session of a national dialogue among Iraqi political parties on Sept. 5, called for by Prime Minister Mustafa al-Kadhimi and attended by all political parties except Sadrists.

The dialogue did not produce a clear outcome. Attendees only agreed to form a technical committee to seek political solutions, but no timeline has been set for forming the committee.

New videos were released over the last few days from last week’s violence showing young men fleeing gunfire amid the leafy green streets and palatial gates of the Green Zone, amid shouts blaming “the parties” and bloodied limbs. The videos continue to circulate amid festering concerns for Iraq’s stability.

Efforts are being made by the government to calm the two sides involved to avoid further bloodshed as well as mitigate repercussions from the violence on relations with countries both near and far, to avoid a halt in investment and any worsening of the country’s already dire economic situation.

Amid signs that incidents between rival Shiite militias may be underreported, multiple meetings have been held with US and other officials, while some note that the country simply cannot afford the economic impact of continued unrest.

Defense Industries Commission chief Mohammed Sahib Al-Daraji told Al-Monitor, “Of course, if the situation continues,” then “no new investment will be attracted to the country because of the lack of stability — the lack of law.”

Some of the worst violence in many years in the country started on Aug. 29 and continued into the following day until an order arrived from powerful Shiite cleric Muqtada al-Sadr to all of his followers to withdraw from the heavily fortified area of central Baghdad containing many government buildings and embassies.

Sadr’s supporters had been conducting a protest for the previous month and occupied government buildings only to then vacate them immediately upon his orders. After he announced he was withdrawing from the political scene, Iran-backed rival Shiite fighters reportedly opened fire on these protestors, who then retaliated. RPGs, missiles and many bullets were shot before Sadr’s order to withdraw and his call for peace.

Sadr commands an armed faction called Saraya Salam and enjoys considerable support among Baghdad’s large, impoverished Sadr City and other areas of central and southern Iraq. These forces do not, however, have the same military might and access to weaponry as those affiliated with his Iran-linked opponents.

At least 30 were initially reported killed while others later died of the injuries sustained during the fighting. Deaths numbered over 60, according to a government source who spoke to Al-Monitor on the condition of anonymity.

Many in Iraq refer to Iran-linked armed groups as al-Ahzab — literally, the (political) parties. Many of these groups have political parties linked to them within an alliance known as the Coordination Framework (CF), which has long taken opposing stances to those of Sadr.

During the massive monthslong protests in 2019, “the parties” were often blamed for assassinations and violence against demonstrators. Many Al-Monitor spoke to in those months on the ground in Nasiriyah and Basra refused to name the groups out of fear of them but used this word to refer to them.

Though there is a diversity of positions within the CF on how to deal with the current situation and the protracted political impasse, many Iraqis have long questioned the loyalty of constituent members of the alliance to Iraq and accused them of “answering to Iran.”

Sadr is seen as more of a nationalist and has in recent years become more palatable to the international community, despite forces answering to him having been behind the deaths of many US forces in the years following the 2003 invasion of Iraq.

The armed groups linked to the CF are believed to have been behind numerous attacks in recent years on facilities hosting US-led international coalition forces as well as logistics convoys for them. Some have also been accused of involvement in the attempted assassination of the prime minister last year.

There have also been numerous murky assassinations of local leaders and fighters from among both the CF and Sadr’s supporters, especially in southern Iraq, with retaliation believed to play a part in some of these killings.

Social media postings by adherents of the two sides have become especially rancorous following the outbreak of violence, with some accounts supporting the CF or its constituent parties calling Sadr a “terrorist.”

The UN Security Council issued a statement on Sept. 1 that “appealed for calm and restraint and welcomed statements by parties calling for all to refrain from further violence.”

On Sept. 4, Kadhimi, President Barham Salih and speaker of parliament Mohammed al-Halbusi all received US Assistant Secretary of State for Near Eastern Affairs Barbara A. Leaf in separate meetings as part of a bid to reassure the international community.

A statement from the Iraqi prime minister’s media office noted that his meeting earlier in the day with Leaf had “covered a number of regional issues and topics of common interest, as well as emphasizing Iraq's prominent role in calming regional tensions through the efforts of Prime Minister al-Kadhimi's government in pursuing a policy of de-escalation and dialogue among the countries of the region.”

It added, “Assistant Secretary Leaf reiterated that the US government will continue to support Iraq and strengthen the partnership between Baghdad and Washington in accordance with the Strategic Framework Agreement between the two countries.”

According to this 2008 agreement, the United States “shall ensure maximum efforts to work with and through the democratically elected Government of Iraq” to “support and strengthen Iraq’s democracy and its democratic institutions as defined and established in the Iraqi Constitution, and in so doing, enhance Iraq’s capability to protect these institutions against all internal and external threats.”

Other countries in the region with high levels of trade and cooperation with Iraq are also watching the situation closely.

A senior Turkish official who asked not to be named noted to Al-Monitor that, for Turkey, “sustainable stability, security and prosperity of Iraq is crucial,” citing a top concern as being that Iraq “is able to cope with (the) PKK and other terrorist organizations on its own.”

“Our business people have always been active in Iraq even during difficult times,” he added, but there needs to be “a suitable environment for them to continue their businesses and provide employment for Iraqis.”

Daraji, head of the Defense Industries Commission, also stressed to Al-Monitor that “all the weapons out of state control need to be withdrawn.”

He added that “political dialogue must be continued. I think the prime minister is trying to keep everyone” engaged in dialogue but “warlords” do not “want stability, do not want a state, don’t want peace in the country because they live in chaos and their benefits come from chaos.”

He added, “We as statesmen must continue doing our jobs until these parties’ leaders understand that the whole country is in one ship. If it sinks, everyone will sink with it.”