Iraq’s Popular Mobilization Units have conducted numerous arrests of alleged 'Bathists' in recent days that raise questions about the legitimacy of the arrests and the political reasons behind them. 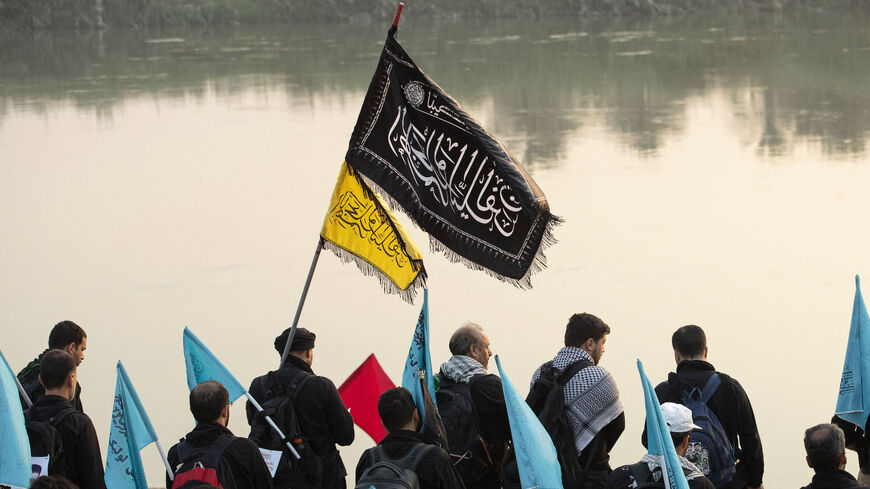 Shiite Muslim pilgrims march toward Iraq's holy city of Karbala to attend the Arbaeen religious commemoration, on Sept. 13, 2022, near the city of Hilla. - HUSSEIN FALEH/AFP via Getty Images

BAGHDAD — As intra-Shiite conflict simmers in Iraq, arrests and questions about them threaten to derail attempts to restore calm after some of the worst violence in years.

On Sept. 8, the government-salaried, Shiite-led Popular Mobilization Units (PMU) stated they had conducted an operation in the early morning hours against a plan by supporters of the outlawed Baath Party to disrupt a massive Shiite religious ceremony underway.

A statement claimed the operation had been conducted “in the holy governorates of Karbala, Babylon, Muthanna and Diwaniyah.”

The PMU, which is dominated by Iran-linked Shiite factions, called it “pre-emptive.” Many PMU are taking part in securing the religious ceremony, which draws millions of Iraqis and foreigners every year to Karbala.

A Sept. 9 official letter seen by Al-Monitor and sent by a member of parliament to the head of the country’s armed forces, however, requested clarification on the arrests in Diwaniyah, noting that among those arrested were people involved in the 2019 protest movement — including prominent members of the community — and that a number of irregularities seemed apparent.

The parliament member asked whether the operation had actually been approved by the commander-in-chief of the armed forces, a role entrusted to the prime minister.

A senior government official told Al-Monitor on Sept. 14 that the PMU had “so far” announced two operations of this sort but that the entire matter was still unclear over a week later.

“All security announcements should be done by the Iraqi Security Media Cell, but they (the PMU) do their own announcements and it is not clear,” he said, whether the operation was actually conducted as stated or needed or whether “they were just making up something.”

On Sept. 15, a Twitter account for the Iran-linked Iraqi armed faction Harakat Hezbollah al-Nujaba (HHN) reported that the PMU had in recent days “arrested 44 people who were planning to disrupt the procession (to Karbala) by publishing leaflets against religious ceremonies and threatening the security of the Arbaeen pilgrimage.”

A photo accompanying the tweet showed dozens of men in orange and yellow prison attire and black covering their faces, with piles of papers and a line of cell phones laid out before them.

Al-Araby al-Jadeed on Sept. 8 quoted sources in the Diwaniyah Police Directorate as saying that "a force coming from outside the governorate entered and arrested four figures, including a tribal leader, and left without the police being able to verify their identities or the security apparatus to which they belong.”

The same publication noted that an Interior Ministry official in Baghdad had said that those arrested were not known to have had any security-related issues but some had taken part in the 2019 protests.

The arrests are seen by some as a warning against taking part in protests scheduled for Oct. 1, which will commemorate protests that began three years ago and that later came to be called the Tishreen protests. The 2019 protests left hundreds dead and led to the resignation of the government at that time.

Many activists claimed at that time that those involved in the numerous assassinations and attempts to suppress the protests were from what they called “the parties” — Iran-linked political parties with their own armed factions, such as Asaib Ahl al-Haq (AAH).

AAH and HHN are both part of what is known as the “muqawama,” or the Iran-led resistance, and both have fought in Syria on the side of the government under Bashar al-Assad against local opposition forces there.

Grievances between the more nationalistic Shiite cleric and “kingmaker” Muqtada al-Sadr and the leaders of these groups date back many years.

Sadr has also long been against deploying Iraqi armed forces in Syria, while the Iran-led muqawama factions claim to be involved in a borderless jihad.

Sadr commands an armed faction called Saraya Salam and enjoys considerable support among Baghdad’s large, impoverished Sadr City and other areas of central and southern Iraq. These forces do not, however, have the same military might and access to weaponry as those affiliated with his Iran-linked opponents.

A sit-in that began this summer in Baghdad’s most heavily secured area, the Green Zone, by Sadr's supporters has become known as the Ashura protest.

A month after the sit-in began, Sadr and Iran-linked armed factions clashed in a battle that lasted almost 24 hours in late August, leaving dozens dead, before Sadr called on his supporters to leave the Green Zone.

Some of his supporters in recent days have circulated images calling for the Tishreen and Ashura protestors to join forces on Oct. 1.

One prominent political figure told Al-Monitor this week that talks are being held by the political parties of the Iran-linked Coordination Framework to try to come to an agreement with Sunni and Kurdish parties for a path toward a new government prior to Oct. 1 due to serious concerns about what might happen if they do not.

No new government has been formed after the elections held in October last year, and much of the population has lost hope in the political process.

Meanwhile, black silken flags line the roads of central and southern Iraq, and millions of black-clothed religious pilgrims crowded them in early September in the largest annual pilgrimage in the world, which involves walking to the city of Karbala to commemorate the martyrdom of the grandson of Muslim Prophet Mohammed in the seventh century. It ends Saturday evening.

At least 3 million Iranians have entered Iraq for this stated purpose, and tens of millions of Iraqis and others are taking part in the ceremony.

Many prominent Iraqis — including the commander of Iran’s Islamic Revolutionary Guard Corps’ Quds Force as well as the daughter of Iranian Gen. Qasem Soleimani (the general was assassinated via US drone strike at the airport in Baghdad in January 2020) — have been photographed in Karbala in recent days.

The pilgrimage was prohibited for many years under the Baath Party’s rule prior to the US invasion in 2003 and the ousting of the Sunni president at that time, Saddam Hussein. The Iraqi population is overwhelmingly Muslim, with a Shiite majority.

“We wish we had better conditions to provide better services. You know the conditions under which this government works and the circumstances in which it was formed. Until now, and for 28 months, we had only a six-month budget, yet we marched forward, ignored the wounds, and endured only to serve our people and the Karbala pilgrims,” said a Sept. 14 statement issued by Prime Minister Mustafa al-Kadhimi’s office.