PMU under pressure to integrate into Iraqi state

Following dramatic changes in the leadership of the Popular Mobilization Units, two rockets hit near the US Embassy in Baghdad, signaling discontent with the move. 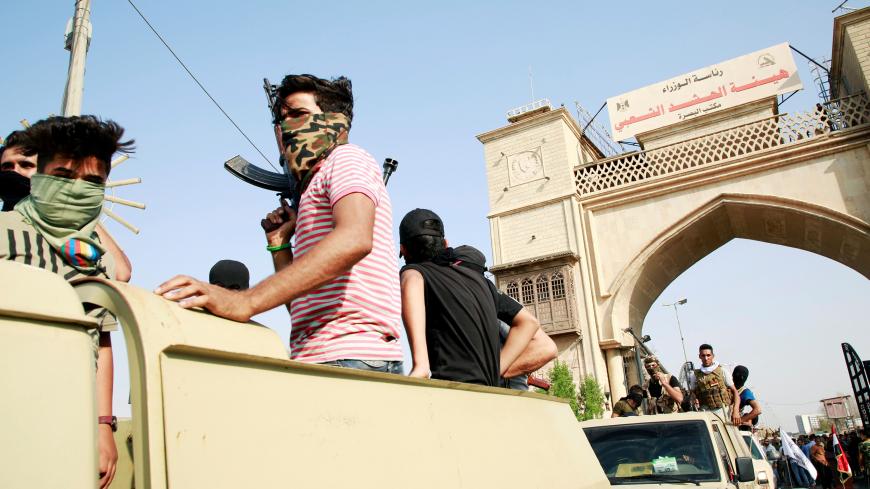 In a meeting between US President Donald Trump and his Iraqi counterpart, Barham Salih, on the sidelines of the UN General Assembly meeting Sept. 24, Trump asked Salih, "Can you assure us that you can control all the rogue elements, especially that we have two rockets landing?"

Trump was referring to the two Katyusha rockets that landed near the US Embassy in Baghdad Sept. 23, with no casulaties. Iraqi security forces captured the Katyusha launchpad in the al-Aathar district near Dora, but no one has claimed responsibility so far.

The US-led coalition forces in Baghdad further warned in a statement that attacking coalition personnel and facilities "will not be tolerated" and that forces preserved the right to self-defense.

"We take this incident seriously, as do our Iraqi security forces partners," the coalition statement said.

Salih told Trump, "It’s our sovereign responsibility to abide by our constitution … not to be used as a base for any threat against our neighbors." He expressed Iraq's "gratitude to the United States and the international coalition that has come to help us overcome the tyranny of [the Islamic State] and terrorism."

The Iraqi government has also been unable to stop pro-Iranian factions among the Popular Mobilization Units (PMU) that threaten the US presence in Iraq.

However, the Iraqi government has progressed in its attempts to curb the reign of the PMU.

Iraqi Prime Minister Adel Abdul Mahdi issued a decree last July ordering all the PMU factions to come under the umbrella of the state forces and to abandon their religious names, political affiliations and economic offices in Iraqi cities.

Some PMU economic offices have closed, and several affiliated corrupt figures were arrested in August.

The PMU also attempted and failed to form an air force following attacks on its Iraqi bases, despite its deputy head Abu Mahdi al-Muhandis’ announcement that he had appointed an air force head.

Moreover, the prime minister dismissed Muhandis from his post Sept. 21.

Before the air force unit announcement, Muhandis had issued another statement accusing the United States of facilitating Israeli attacks on PMU bases. PMU head Falah al-Fayyad said Muhandis was expressing a personal opinion that did not represent the PMU position.

Fayyad prepared a proposal for reforming the PMU, including introducing a new structure and removing the deputy post. Abdul Mahdi approved the proposal, which allowed Fayyad to remove Muhandis from his post.

Under the new structure, Muhandis will be the PMU’s chief of staff, whose duties include coordinating among the PMU.

Al-Monitor learned from a source close to the Iraqi intelligence services that Iraqi security forces are aware who launched the attack: a faction of the PMU that is unhappy with Muhandis' dismissal.

Muhandis himself expressed discontent with his removal. He said Sept. 23 that the head of PMU remained in his office in Baghdad as they fought the Islamic State. Now, that head has decided to marginalize him and his supporters. "I support the reform of the PMU, but I ask to be just toward those who fought terrorism, and to not follow the US dictations and directions," he said.

Iran has been silent on the Muhandis dismissal, indicating that there was an arrangment with Iran beforehand.

Al-Monitor learned from a source in Muqtada al-Sadr's office that during Sadr's last visit to Tehran, a central issue on his agenda was in controlling Muhandis and preventing him from interfering in matters of the Iraqi state. Sadr was disappointed when Muhandis announced the formation of a PMU air force, and he subsequently tweeted that this was the end of the Iraqi state.

Internal efforts and external pressures to limit PMU influence in Iraq are not futile. It is a realistic goal that requires wise actions and careful implementation.