In an address at the White House this morning, President Donald Trump alternated between using carrot and stick with Tehran. 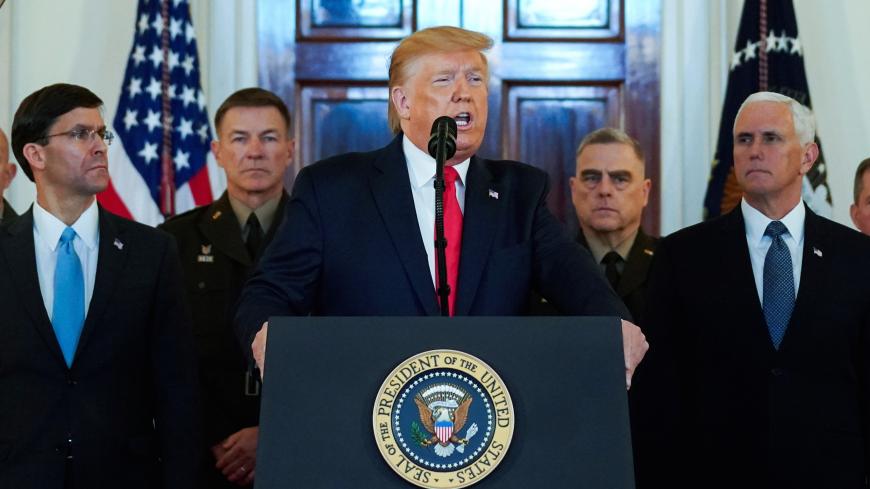 US President Donald Trump delivers a statement about Iran flanked by US Defense Secretary Mark Esper, Army Chief of Staff General James McConville, Chairman of the Joint Chiefs of Staff Army General Mark Milley and Vice President Mike Pence in the Grand Foyer at the White House in Washington, US, Jan. 8, 2020.

In a blistering response at the White House today to an Iranian missile attack against Iraqi bases that house US troops, President Donald Trump alternated between using carrot and stick with Tehran: floating the possibility of military cooperation against the terror groups while pledging to step up sanctions against the Islamic Republic.

“As long as I am president of the United States, Iran will never have a nuclear weapon. Good morning,” Trump opened Wednesday’s remarks, more than 18 hours after the Pentagon said Iran launched 15 missiles at large Iraqi bases at Al-Asad and Erbil. “No Americans were harmed in last night’s attack by the Iranian regime.”

Trump said only minimal damage was sustained at the Erbil airport, which has taken on a role as a hub for defeat-IS (Islamic State) operations as the Pentagon thinned the number of American troops in Syria over the past three months, and Al-Asad, where the US president visited in December 2018 in his first overseas trip to see US forces in the field.

The commander-in-chief credited early warning systems with helping to stop the attack, though it’s not clear what defenses were used. Defense Secretary Mark Esper is set to brief members of Congress on the attack later this afternoon.

But in the wake of a US drone strike that killed Iran’s elite Quds Force chief Qasem Soleimani, Trump said the United States and Iran have a “natural enemy” in IS and can “work together on this and other shared priorities” in the future. Trump described Soleimani as "the world's top terrorist" who "fueled bloody civil wars across the region."

Since the 1979 Iranian Revolution that overthrew the US-allied Mohammad Reza Pahlavi, successive American administrations have used Oman as a diplomatic go-between and enlisted Switzerland to represent American interests in the country.

There is little to no track record of the United States and Iran working together militarily, even though Iraq’s government has credited Iran with contributing to defeat-IS operations.

One expert told Al-Monitor there was a period of cooperation against the Taliban in Afghanistan in 2001, initiated by Soleimani, that included now-Foreign Minister Mohammad Javad Zarif and other Quds Force officers who mostly met with Ryan Crocker.

"That was real cooperation, though to what intended end (besides that of the Taliban) was never clear," said Afshon Ostovar, a senior analyst at the Center for Strategic Studies at CNA, and has joined the Naval Postgraduate School as an assistant professor of national security affairs. "It was short lived, marginal, and never fully embraced by the Bush administration."

Between 2015 and 2016, the Pentagon used the chief of the Iran-linked Badr Brigade as a go-between to make sure Tehran-connected Popular Mobilization Units were not hit in US airstrikes against IS.

Experts said the unlikely partnership is unlikely to get off the ground because of the deep enmity between the rival nations.

“The Iranians wouldn't want it,” Phillip Smyth, a fellow at the Washington Institute, told Al-Monitor of possible military collaboration. “De-conflicting is different from fighting alongside.”

Despite signs of renewed interest in talks from both sides after the 11-day military tit-for-tat that culminated in Soleimani’s death and Wednesday’s Iranian ballistic missile strikes, Smyth says a rapprochement based around fighting IS remains unlikely.

“It comes down to this: The Islamic Republic has a deep ideological hatred of the US,” Smyth said. “They like swooping in after the US has taken care of an issue related to IS,” he added, citing the Iraqi security forces breaking a 2014 siege in the Iraqi city of Amerli, where US airstrikes helped seize ground from IS that Iranian-controlled Shiite militias hold today.

Trump also called for Germany, France, the United Kingdom, Russia and China to break out of the 2015 Iran nuclear deal to negotiate a better agreement, and he called for NATO to get “much more involved” in the Middle East. The Atlantic alliance said it planned to suspend military training in Iraq amid Iranian threats.