No one was hurt in the latest barrage, an Iraqi military official said 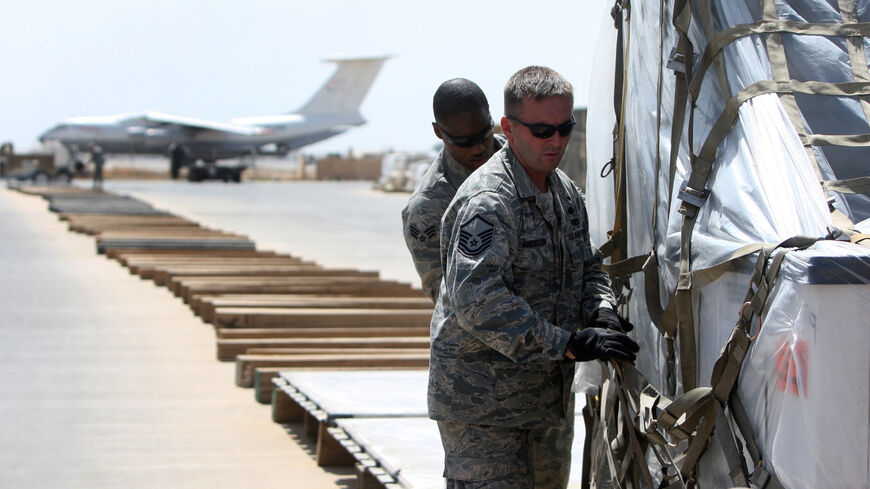 US soldiers load cargo into planes during a logistical operation to clear equipment and heavy machinery from the Balad military base, north of Baghdad, on Aug. 27, 2010 a week before the US military is due to end its combat mission in the country. - AHMAD AL-RUBAYE/AFP via Getty Images

Two rockets landed outside Iraq’s Balad air base on Sunday ahead of planned talks between Washington and Baghdad officials over the future of US troop presence in Iraq.

No personnel were injured and no damage was inflicted, the Iraqi Army’s Maj. Gen. Tahseen al-Khafaji told the Associated Press.

Balad, which lies some 50 miles north of the Iraqi capital, is among the few Iraqi bases still housing US military personnel, who surged back into the country in 2014 to crush the then-rising Islamic State (IS) jihadist group.

The Pentagon says some 2,500 US troops remain in Iraq alongside other nations’ forces as advisers to Iraq’s military on security operations.

The US-led international coalition to defeat IS significantly reduced its footprint in Iraq last year, transitioning from tactical support to advising and mentoring Iraqi commanders in counterterrorism operations as local forces mop up the remnants of IS.

Rocket attacks on US positions have continued in recent months as certain political factions, including groups affiliated with Iran, pressure the government of Prime Minister Mustafa al-Kadhimi to expel the remaining US forces from the country.

The US has attributed responsibility for some of these attacks in Iraq to militias supported by Iran.

Previous barrages brought the US and Iran to the brink of open conflict in Iraq during the previous US administration of former President Donald Trump.

More than 100 US personnel were injured in an Iranian ballistic missile barrage early last year after Trump ordered Iranian Quds Force commander Qasem Soleimani killed in a drone strike in Baghdad. The assassination came after a series of retaliations by both sides after a US citizen was killed in a rocket attack at another Iraqi airbase.

Most recently, a rocket strike last month on al-Asad airbase led to the death of a US contractor in what the Pentagon said was a “cardiac episode.”

President Joe Biden approved an airstrike on a site used by Iran-backed militias in Syria in February in an attempt to stem a series of barrages that struck Iraq’s Kurdistan region, Baghdad and Balad air base earlier this year.

Iraqi and US officials are set to discuss the future of their bilateral relationship on Wednesday, in the fourth round of so-called strategic dialogue.

NATO has agreed to significantly expand its presence in Iraq to some 4,000 advisors as the defeat-IS coalition has drawn down.

The US-led coalition has said IS is no longer able to capture and hold territory. With the jihadist group decimated, the two separate international missions can play similar roles in supporting the strength of Iraq’s own military forces.

An increase in NATO’s presence may allow for further reduction of US forces in the country to take pressure off Kadhimi’s government, though American forces are considered the most experienced at counterterrorism operations.