Coalition forces in Syria also hit back in response to rocket fire near al-Omar oilfield. 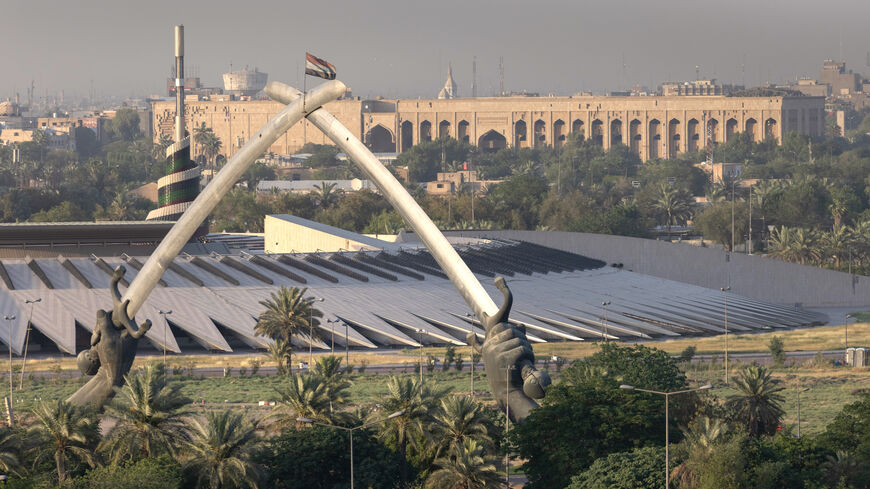 The Crossed Sabers monument and the Iraqi Tomb of the Unknown Soldier stand near a Saddam-era statue as seen from the International Zone on May 29, 2021, in Baghdad, Iraq. - John Moore/Getty Images

No one was hurt in the attempted attack, the second of its kind in two days. Two other suicide drones were shot down yesterday by the coalition’s C-RAM air defenses near Baghdad International Airport, which houses an Iraqi military facility used by the international coalition.

Yesterday’s attack came on the second anniversary of the US killing of Iranian Gen. Qasem Soleimani in a Baghdad drone strike, a move for which Iran’s government and the militias it supports in Iraq vowed revenge.

Iran’s President Ebrahim Raisi said in a speech in Tehran Monday that former US President Donald Trump and former Secretary of State Mike Pompeo must be prosecuted for the assassination and that Iran will take revenge if they are not.

Iran-backed militias have frequently targeted US and international troop positions since the Islamic State’s territory was largely recaptured in Iraq in 2017. Drone attacks have become more common over the past year, with a number of strikes at US sites in both Iraq and Syria.

US coalition forces launched a strike in response to observed rocket fire near the al-Omar base in Syria on Tuesday afternoon, the BBC first reported.

“We had reason to believe they were going to be used as launch sites,” Pentagon Press Secretary John Kirby said when asked about the US response during a press conference on Tuesday. Kirby said he did not believe the coalition’s retaliation was conducted with aircraft.

On Monday, coalition troops near the town of al-Shaddadi in northeast Syria were targeted by indirect fire. No coalition positions were hit but civilian buildings were, US Central Command said today.

Local Kurdish-led security forces backed by the US arrested four individuals outside Deir Ezzor who were believed to be involved in the attack. The incident remains under investigation, CENTCOM said.

Rocket attacks in Iraq have been largely stopped since US President Joe Biden and Iraq’s Prime Minister Mustafa al-Kadhimi announced that the remaining US combat troops would depart Iraq by Jan. 1.

Militia leaders have warned that attacks will resume if all US forces are not out of the country by the deadline. Some 2,500 US troops remain in Iraq as military advisers and support personnel.