The strike follows a drone attack on a coalition site at Erbil Air Base last week. 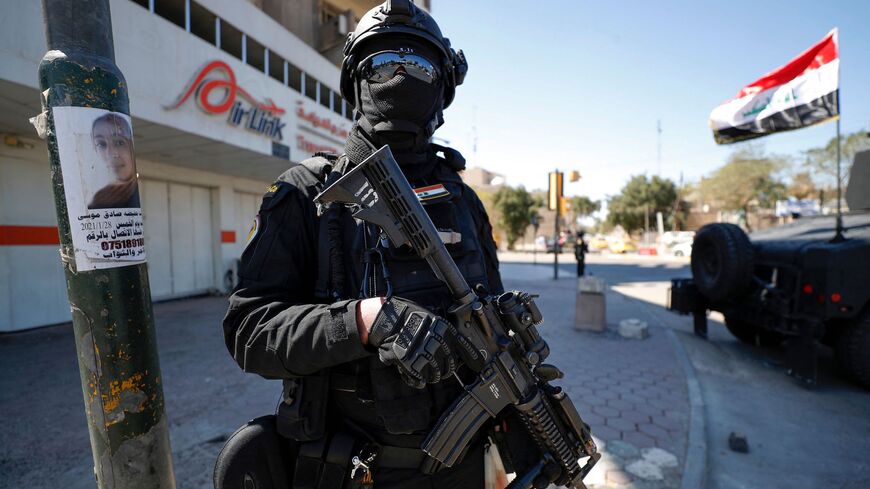 Members of the Iraqi Counter-terrorism Services are deployed in the streets of the capital Baghdad on March 27, 2021. - AHMAD AL-RUBAYE/AFP via Getty Images

Baghdad International Airport, which houses personnel of the US-led international military coalition against the Islamic State, was targeted by at least three rockets on Thursday night.

No one was reported injured in the strike, which landed at the edge of the airport near an area housing US military forces, according to an Iraqi military statement.

Iraqi military personnel reportedly located the rockets’ launch site near the Baghdad neighborhood of al-Jihad and defused unlaunched rockets, according to the statement.

The barrage is at least the fourth such attack on Iraqi security facilities in just over two weeks, and the second targeting sites used by US military personnel.

Last week an armed drone damaged a warehouse at Erbil Air Base in Iraq’s Kurdistan region. The same night, a Turkish soldier was killed in a rocket attack on an encampment northeast of Mosul.

The United States has attributed other such attacks to Iran-backed militias in Iraq, which are vying for influence against the central government in Baghdad and have called for the expulsion of the remaining 2,500 US forces left over from the fight against IS.

The steady drumbeat of such attacks has picked up since a de facto cease-fire with the militias expired late last year. Thursday’s strike is the 23rd such attack since President Joe Biden took office in January, according to AFP.

Both the previous and the current administrations have moved to reduce the US military’s presence in the Middle East, though CENTCOM commander Gen. Kenneth McKenzie said this week that he does not foresee a full US withdrawal from Iraq anytime soon.

US officials are set to discuss the future of the international coalition’s presence in Iraq in an upcoming round of dialogue, a schedule for which has not yet been publicly announced.