Militias launch spate of attacks on US positions in Iraq

Iraq's Ain al-Asad air base was hit with the second rocket attack in just over 48 hours. 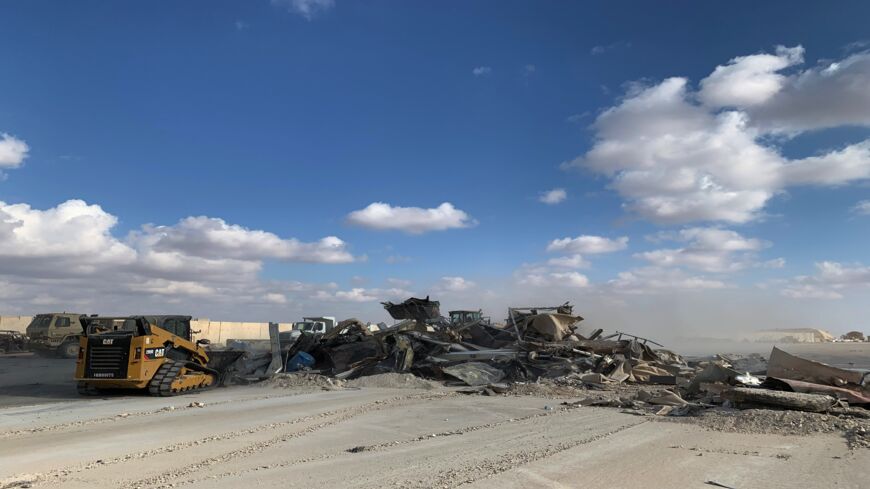 A picture taken on January 13, 2020, during a press tour organized by the US-led coalition fighting the remnants of the Islamic State, shows a bulldozer clearing debris from Ain al-Asad military air base in the western Iraqi province of Anbar. Iran last week launched a wave of missiles at the sprawling base in western Iraq and a base in Erbil, capital of Iraq's autonomous Kurdish region. - AYMAN HENNA/AFP via Getty Images

Fourteen rockets rained down on Iraq’s Ain al-Asad air base on Wednesday in the second such attack on the site in three days. Two people were reported to have sustained minor injuries in today’s attack on the base, which houses US personnel.

Speaking to Al-Monitor, coalition spokesperson Col. Wayne Marotto could not immediately confirm the nationalities of those reportedly injured.

Iraq’s military released photos of what it said was the rocket launch system hidden inside a container truck packed with bags of flower in a nearby residential neighborhood. Leftover rockets in the truck exploded, damaging a nearby mosque, Iraq’s Security Media Cell said.

The fusillade appears to be part of a sudden spate of attacks on sites used by US personnel in Iraq since July 4. On Monday, Ain al-Asad was struck by three rockets, though no one was reported injured.

Yesterday, Erbil air base, located at the Kurdistan Region’s main international airport, was hit with a barrage of rockets. No damage or injuries were reported, according to Marotto.

Also on Tuesday, the United States said its air defenses shot down a drone targeting the US Embassy in Baghdad. The State Department said the incident is under investigation.

Earlier today, and across the border in eastern Syria, the Kurdish-led alliance of local militias supported by the US-led coalition to defeat the Islamic State (IS) said a drone attack was thwarted at the coalition base at Al-Omar oilfield. The coalition has not confirmed the attack occurred.

A previous Syrian Democratic Forces report of a projectile attack on Al-Omar on Sunday was subsequently retracted after the US-led coalition denied it had occurred. Speaking to reporters at the Pentagon on Tuesday, Press Secretary John Kirby called the report “disinformation.”

Late last month, Al-Omar came under rocket fire less than a day after the United States launched airstrikes targeting positions used by Iran-backed militias on both sides of the Iraq-Syria border. The precision strikes, the second batch authorized by President Joe Biden since he took office in January, killed four militia personnel. Pro-Iran militias in Iraq have vowed revenge for the deaths.

The episodes are the latest in a yearslong string of typically small-scale retaliatory attacks between the United States and Iran-backed militias in Iraq, though last month’s barrage at Al-Omar marked a relatively rare flare-up on the Syrian side of the border.

A spate of retaliatory attacks in late 2019 led the former Donald Trump administration to order the military to kill Islamic Revolutionary Guard Corps (IRGC) Quds Force commander Qasem Soleimani with a drone strike in Baghdad. That move nearly led to open conflict, as Iran retaliated by firing more than a dozen ballistic missiles at two bases housing US personnel in Iraq.

The two sides both fought against IS, but since the jihadist group’s demise, they have exchanged occasional blows in Iraq as pro-Iran militias linked to Tehran’s IRGC seek to pressure US forces to leave.

US policymakers have been reluctant to withdraw the residual force from Iraq, but they have discussed with NATO a plan to increase the alliance’s own stabilization mission in the country to compensate for the roughly 2,500 US troops once they leave.

US and Iraqi officials are set to continue their dialogue, including about the American troop presence, this summer.