More than a dozen ballistic missiles rained down on Ain al-Asad and Erbil air bases in Iraq last year after the United States killed Qasem Soleimani. 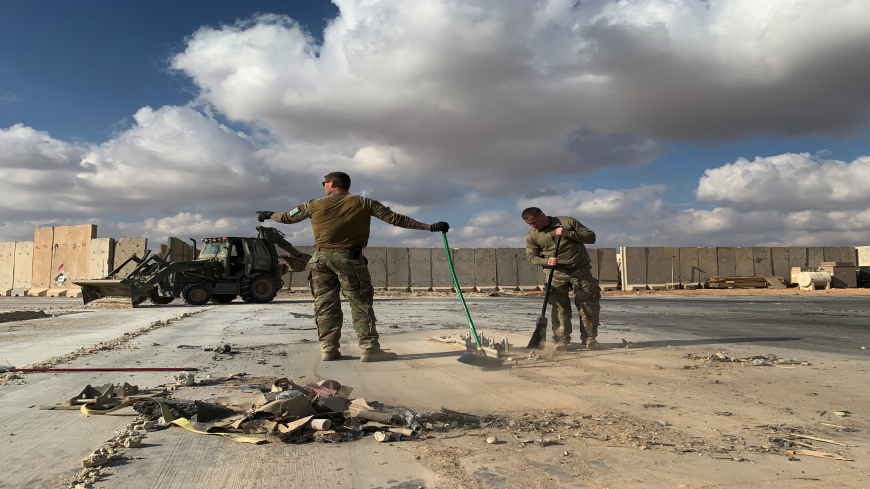 A picture taken on Jan. 13, 2020, during a press tour organized by the US-led coalition fighting the remnants of the Islamic State group, shows US soldiers clearing rubble at Ain al-Asad military air base in the western Iraqi province of Anbar. Iran last week launched a wave of missiles at the sprawling Ain al-Asad air base in western Iraq and a base in Erbil, capital of Iraq's autonomous Kurdish region, both hosting US and other foreign troops, in retaliation for the US killing top Iranian Gen. Qasem Soleimani in a drone strike in Baghdad on Jan. 3. - AYMAN HENNA/AFP via Getty Images

The US Defense Department released aerial surveillance video of a ballistic missile attack launched by Iran early last year on an Iraqi military base used by American personnel.

The footage, first aired by CBS News on Sunday, shows a barrage of more than one-ton missiles smashing into maintenance and dining facilities at Ain al-Asad air base in Iraq.

The Iranian attack, which also struck a military coalition air base at the Erbil International Airport in Iraq’s Kurdistan Region, wounded over 100 US military personnel with concussive injuries. No one was killed. The Pentagon later said some 16 ballistic missiles were fired, marking an unprecedented display of the Islamic Republic’s conventional capabilities.

(US Department of Defense)

The de facto leader of Iraq’s pro-Iran militias, Abu Mahdi al-Muhandis, was also killed in the strike, along with eight other people. The attack prompted uproar in Iraq, whose parliament passed a resolution calling for US forces to leave the country.

Iran launched the ballistic warheads at Erbil and Ain al-Asad just five days later. While the Pentagon initially said there were no casualties, evidence of military personnel having sustained brain injuries had emerged within a day, officials later said.

Hours after the strikes, Iran’s air defenses shot down a civilian passenger jet en route to Kyiv, Ukraine International Airlines flight 752. Iranian officials initially denied responsibility but later admitted the incident and said it was a mistake amid heightened tensions with the United States.

Iran-linked militias in Iraq have continued in recent weeks to launch much smaller yet nonetheless deadly barrages of rockets against US and Iraqi positions in the country.

The bombing marked the first military strike of Joe Biden’s presidency. It comes as his administration keeps up its leverage in an attempt to rejoin nuclear negotiations with Iran to revive the 2015 JCPOA.