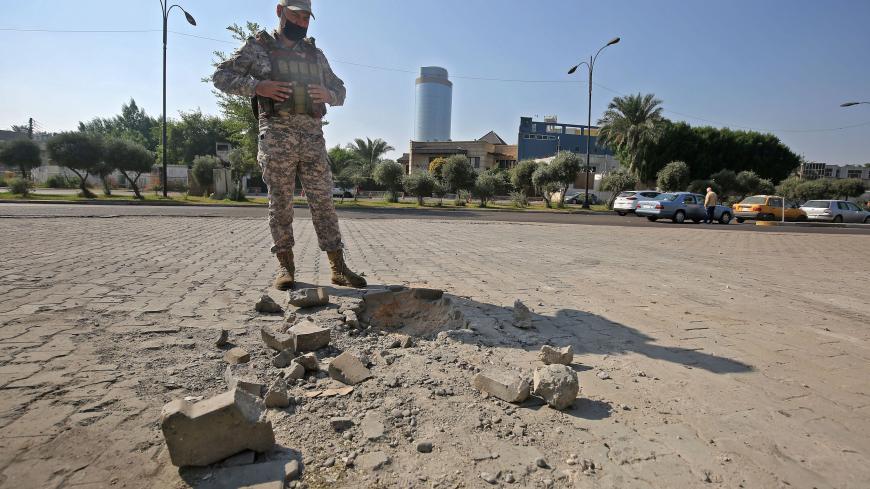 A member of the Iraqi security forces inspects the damage outside Zawraa park in Baghdad, after a volley of rockets slammed into the Iraqi capital breaking a monthlong truce on attacks against the US Embassy, Iraq, Nov. 18, 2020. - AHMAD AL-RUBAYE/AFP via Getty Images

Two rockets fell in Baghdad’s Green Zone, home to foreign embassies, on Monday. No casualties have been reported so far, according to Iraq’s military and the US-led coalition.

A third rocket landed in the nearby al-Harithiya neighborhood, just west of the Green Zone. The rockets’ launcher was found by Iraqi security forces in al-Salaam neighborhood southwest of the city’s center, Iraq’s Security Media Cell said.

The attack is the latest in a long series of Katyusha rocket barrages against Western targets that renewed late last year. Some of the strikes have been claimed by suspected front groups for powerful Shiite militias in Iraq.

On Saturday night, at least four rockets landed at Balad air base, wounding a South African contractor for Sallyport, an American company that services Iraq’s F-16s.

Last week, some 14 rockets landed in and around Erbil’s airport in the typically tranquil Kurdistan Region of Iraq. One contractor for the US-led military coalition was killed and nine others were injured, including an American military member. The grounds of Erbil’s airport house an air base used by the US-led coalition to defeat the Islamic State (IS).

A supposed group calling itself Saraya Awliya al-Dam, or the Guardians of the Blood Brigade, claimed credit for the Erbil strike. Some experts suspect the group could be a front for either Kataib Hezbollah or Asaib Ahl al-Haq, two of the most powerful Shiite militias in Iraq that are backed by Iran’s Islamic Revolutionary Guard Corps (IRGC).

Such strikes have sporadically continued since the United States, Iraqi forces and Iraq’s Popular Mobilization Units (PMU) crushed IS' hold on Iraqi territory.

A similar strike in 2019 killed a US citizen, leading to the United States bombing Kataib Hezbollah targets across Iraq. Days later, PMU representatives and supporters stormed the US Embassy in Baghdad. Then-US President Donald Trump ordered Qasem Soleimani, commander of the IRGC’s expeditionary Quds Force, killed in a drone strike in Baghdad.

Yemen’s Houthi rebels, also linked to the IRGC, have continued to launch aerial attacks into Saudi Arabia in recent weeks as the new US administration of President Joe Biden pushes for an end to the war in Yemen. At least two recent aerial attacks on Saudi Arabia have come during visits by senior US officials.

Meanwhile, the US administration is seeking to reenter the 2015 international nuclear agreement with Tehran to limit the Islamic Republic’s nuclear capabilities.

Iranian officials insist the scope of the proposed talks does not go beyond the original nuclear deal, which placed no restrictions on Tehran’s ballistic missile or drone program.

The Trump administration unilaterally abandoned the agreement in 2018, replacing it with a regime of economic sanctions designed to roll back Iran’s influence in the Middle East. US and UN officials have cited evidence of Iran transferring missile and drone technology to proxies in Iraq and Yemen.

Washington has left a small residual presence of military forces in Iraq and Syria, nominally to mop up the remnants of IS sleeper cells. Particularly in Syria, the remaining troop presence offers US policymakers the added benefit of limiting Iranian proxies’ free access to strategic territory, as Israeli airstrikes hit Iran-linked targets suspected of transporting military hardware that could potentially threaten Israel.