The Iranian Foreign Ministry said attempts to blame Tehran for the attack are "suspicious." 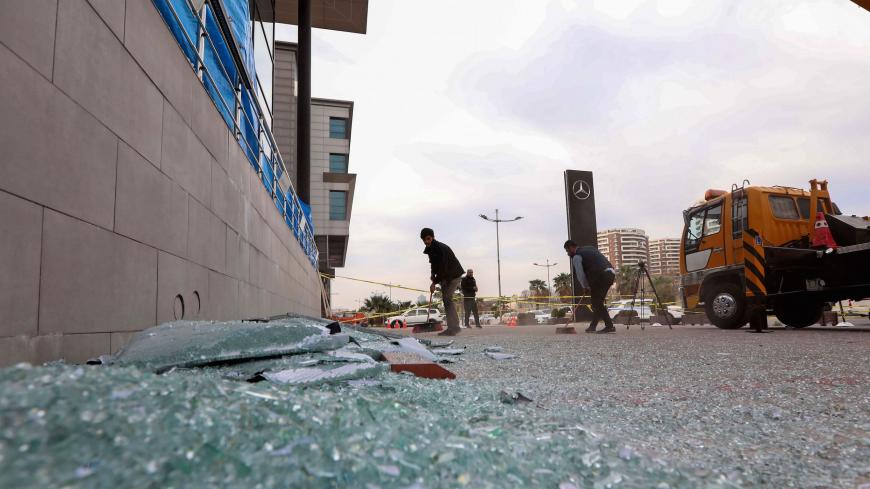 A worker cleans shattered glass on Feb. 16, 2021, outside a damaged shop following a rocket attack the previous night in Erbil, the capital of the northern Iraqi Kurdish autonomous region. - SAFIN HAMED/AFP via Getty Images

Some 14 rockets landed in and around the base, located at the city’s international airport, on Monday night, the US-led coalition said. One Iraqi civilian contractor was killed, while eight other contractors, including four Americans, and a member of the US military were injured.

“These rumors are strongly rejected,” Iranian Foreign Ministry spokesperson Saeed Khatibzadeh said Tuesday in Tehran of speculation that Iran was behind the attack. He added, “The suspicious attempts to attribute the attack to Iran are also strongly condemned.”

A number of governments and the United Nations condemned the attack and offered support, but so far no government has publicly accused Iran of involvement. The US State Department said it was "outraged" by the attack.

Investigators under the Kurdistan Regional Government on Monday night published photographs on Facebook of the vehicle from which the rockets were believed to have been launched around 9:30 p.m. The Kia Bongo flatbed truck, found just outside Erbil, was loaded with an array of launcher tubes that still held four unfired rockets. The US-led coalition said the projectiles were 107mm.

Similar launchers have been used in a spate of attacks on Iraqi military bases housing coalition troops in recent years, but Iraqi Kurdistan has largely been spared such strikes. Monday’s barrage was a rarity in Erbil, which has remained a sanctuary of quiet amid recent years of chaos that followed the rise and fall of the Islamic State.

The incident prompted a call between US Secretary of State Antony Blinken and KRG Prime Minister Masrour Barzani.

Some observers suspect Saraya Awliyya al-Dam may be a front group for powerful Iran-backed militias in Iraq, such as Kataib Hezbollah and Asaib Ahl al-Haq. Iran’s Islamic Revolutionary Guard Corps (IRGC) supports a network of powerful Shiite militias in Iraq.

“The way the front groups speak, the way they transmit their messages, it’s all part of the old strategy that the Iranians have used for quite a while,” Smyth said.

The Erbil strike follows a series of rocket attacks on US forces in Iraq in recent years that the previous US administration under President Donald Trump regularly blamed on Iran-backed groups.

One strike in late 2019 that killed an American contractor nearly delivered Washington and Tehran to the brink of war when the United States responded to the escalating tit-for-tat by assassinating Soleimani in early 2020.

The US-led coalition withdrew from a number of smaller military bases around Iraq last year, consolidating at larger bases such as Erbil Air Base. The contraction was part of the coalition’s transition to advising, rather than directly training, Iraq’s security forces, but the military said it was accelerated by the repeated rocket attacks.

The Trump administration also pointed the finger at Tehran for a series of missile and drone attacks carried out by Yemen's Houthi rebels into neighboring Saudi Arabia, which has led a failed war effort to crush the IRGC-linked movement.

Late last month, two explosions were heard over the Saudi capital of Riyadh as the head of US military forces in the Middle East, Gen. Kenneth "Frank" McKenzie, was visiting the region.

The United States has put on a show of military force in the Persian Gulf region to deter attacks by Iran and its proxies as the Biden administration looks to approach negotiations with Tehran over rejoining the 2015 nuclear deal.