Gen. Kenneth "'Frank" McKenzie warned Iran in the boldest statement yet from the Biden administration over the attacks. 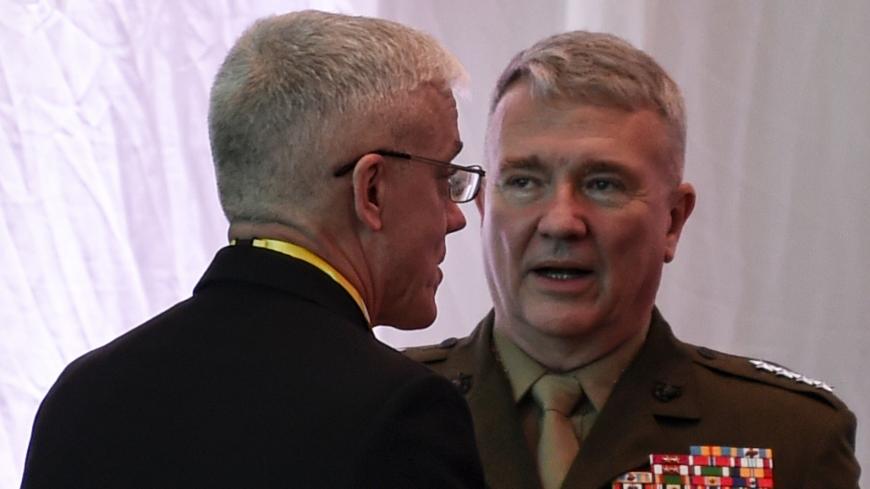 The top commander of US military forces in the Middle East issued a subtle but unmistakable warning to Iran today over recent projectile attacks on Iraq’s Kurdistan region and Saudi Arabia.

CENTCOM commander Gen. Kenneth “Frank” McKenzie said he considers it “very dangerous” for Iranian officials to assume that an uptick in such attacks in recent weeks “can be non-attributable in some way back to Iranian policy.”

“We believe that all of this ultimately emanates from Iran,” McKenzie said during a virtual forum hosted by the Beirut Institute.

The general’s comments went a step beyond the Biden administration’s cautious messaging to date on attributing blame for the recent strikes as Washington seeks to reengage with Tehran on a return to the 2015 nuclear deal.

Last week, more than a dozen Iranian-made rockets rained down in and around Erbil International Airport in northern Iraq’s Kurdistan region, killing a military contractor and wounding nine other people, including a member of the US military.

A supposed group calling itself Saraya Awliyya al-Dam claimed responsibility for the attack. Some experts have suggested it is one of many front groups for influential Iran-backed militias in Iraq, though Iran’s government denied any involvement in the strike.

“While the names of these groups change, their methodologies and frequently even the weapons they use are similar — if not exactly the same — and ultimately traceable back to Tehran,” said Simone Ledeen, a senior fellow at the Middle East Institute who formerly led the Pentagon’s Middle East office under the Trump administration.

“No major operation or one that would have second- or third-order political effects would be conducted in a vacuum,” Ledeen said.

The Biden administration has so far avoided publicly assigning blame, citing an ongoing investigation led by Iraqi authorities. State Department spokesperson Ned Price said Monday that the United States would “hold Iran responsible for the actions of its proxies that attack Americans.”

Rockets again fell on Baghdad’s Green Zone on Monday, though no one was injured. Kataib Hezbollah, one of the most powerful Iraqi Shia militias linked to Tehran’s Islamic Revolutionary Guard Corps (IRGC), denied responsibility for both the Erbil and Baghdad attacks.

Current US officials have promised a measured response to such incidents, contrasting with the Trump administration’s penchant for quickly pointing the finger at Tehran for the activities of its regional proxies. “What we will not do is lash out and risk escalation that plays into the hands of Iran,” Price said Monday.

A December 2019 rocket strike at a military base in Kirkuk killed a US contractor, launching a tit-for-tat that nearly brought the United States and Iran to the brink of conflict when Trump ordered IRGC Quds Force commander Qasem Soleimani killed in a drone strike in Baghdad.

A number of projectiles have also been launched into Saudi Arabia in recent weeks, in some cases coinciding with official visits from McKenzie and Biden’s Yemen envoy, Timothy Lenderking.

"The Saudis have had good success in intercepting those," McKenzie said Wednesday, noting that the cruise missiles and other projectiles typically fired from Yemen "have Iranian fingerprints all over them."

The commander said he agreed with Saudi Arabia’s Prince Turki al-Faisal — who also spoke during the event — that recent Houthi strikes, such as drone attack on an airport in southwest Saudi Arabia, constituted “terrorism.”

Still, the general praised the Biden administration’s decision to rescind the Yemeni rebels’ official terror designation, saying it was a sign of “goodwill” on the part of the United States to help bring the Houthis to the negotiating table to end Yemen’s civil war.

The Biden administration has put major weapons sales to Saudi Arabia and the United Arab Emirates on hold pending review, citing the humanitarian catastrophe in Yemen.

The US continues to provide defensive support to Saudi Arabia. Defense Secretary Lloyd Austin last week emphasized that the United States’ strategic relationship with Riyadh has not changed.

The United States maintains a Sentinel radar system in Saudi Arabia to monitor potential strikes from Iran. CENTCOM also has a THAAD ballistic missile defense system and two Patriot missile batteries at Prince Sultan Air Base in central Saudi Arabia, where most of the roughly 3,000 US troops in the country are based alongside rotating fighter squadrons since 2019.

“When we have imminent indication of attacks on Saudi Arabia, we share that with them," McKenzie said Wednesday. "That allows them to help defend themselves.”