The high-profile, Iran-backed militia denied responsibility for attacks on US targets in Iraq. 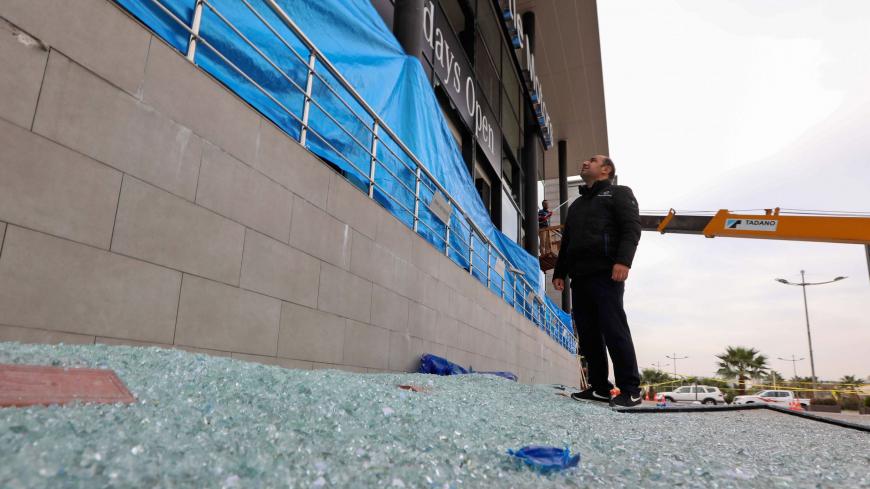 A man inspects the damage on Feb. 16, 2021 following a rocket attack the previous night in Erbil, the capital of the northern Iraqi Kurdish autonomous region. - SAFIN HAMED/AFP via Getty Images

Kataib Hezbollah, one of the largest Iran-backed militias in Iraq, publicly denied any involvement in a recent rocket strike on Erbil International Airport and Baghdad’s Green Zone.

“We absolutely did not target Erbil or the Green Zone and have no knowledge of the group that did,” spokesperson Mohammed Mohi told Reuters on Tuesday.

A supposed group calling itself Saraya Awliya al-Dam claimed credit for last week’s 14-rocket barrage on Erbil’s airport in Iraq’s semi-autonomous Kurdish region. The fusillade killed a military contractor and wounded nine others, including a member of the US military.

While some experts have suspected the supposed group is a front for Iran-backed groups such as Kataib Hezbollah or Asaib Ahl al-Haq, the Biden administration has avoided publicly blaming Iran for the incident thus far.

Pentagon Press Secretary John Kirby reiterated on Tuesday that no blame could be conclusively assigned for the Erbil attack, citing an ongoing investigation led by the Iraqi government.

State Department spokesperson Ned Price on Monday said the United States would “hold Iran responsible for the actions of its proxies that attack Americans.”

Price also said the rockets fired in recent attacks were “Iranian-made and Iranian-supplied” but that no precise attribution for the attack could yet be made.

“We will respond in a way that’s calculated, within our own timetable, and using a mix of tools at a time and place of our choosing, as you’ve heard me say before,” Price said, adding, “What we will not do is lash out and risk escalation that plays into the hands of Iran.”

A similar rocket attack in 2019 killed an Iraqi-born, naturalized US citizen who was working as a military contractor. The previous US administration under former President Donald Trump retaliated for the killing by bombing Kataib Hezbollah targets in various locations across Iraq.

In response, Iraqi Shiite militia and political leaders and supporters stormed the US Embassy in Baghdad. The Trump administration then assassinated Iranian Quds Force commander Maj. Gen. Qasem Soleimani in a Baghdad drone strike — a death Iranian leaders have vowed to avenge.

The Biden administration’s cautious statements on the incidents contrast sharply with the tendency of the former Trump administration to blame Iran and its proxies for such attacks. The new approach has some observers wondering whether the new administration is tiptoeing through such incidents in order to preserve fragile yet so far small gains in convincing Iranian leaders to reengage in dialogue to reassert the 2015 nuclear deal, which the Trump administration abandoned in 2018.

On Tuesday, Kirby appeared to speculate that the strikes in Iraq could be tied to Iranian posturing ahead of the proposed nuclear talks.

“It’s difficult to say with certainty whether there’s a strategic calculation driving this recent uptick in attacks, or whether this is just a continuation of this sort of attack that we have seen in the past,” Kirby said Monday.

Iran-linked armed groups have launched renewed attacks in recent weeks elsewhere in the region. Explosions were heard over Saudi Arabia’s capital late last month as the commander of US forces in the Middle East visited the kingdom. US officials have said one of those strikes was launched from Iraq but provided no public evidence.

A supposed group called Alwiyat al-Waad al-Haq claimed credit for that strike, which reportedly hit the Saudi royal compound on Jan. 23. Mohi on Tuesday told Reuters that “people in the region who have suffered from Saudi [policy] have the right to retaliate.”

Earlier this month, at least four explosive drones hit an airport in southwest Saudi Arabia as Washington’s Yemen envoy, Timothy Lenderking, was set to arrive in the kingdom. Yemen’s Houthi rebels, who have ties to the Islamic Revolutionary Guard Corps, claimed credit for that attack.