The thwarted attack came on the second anniversary of the killing of Iranian commander Qasem Soleimani. 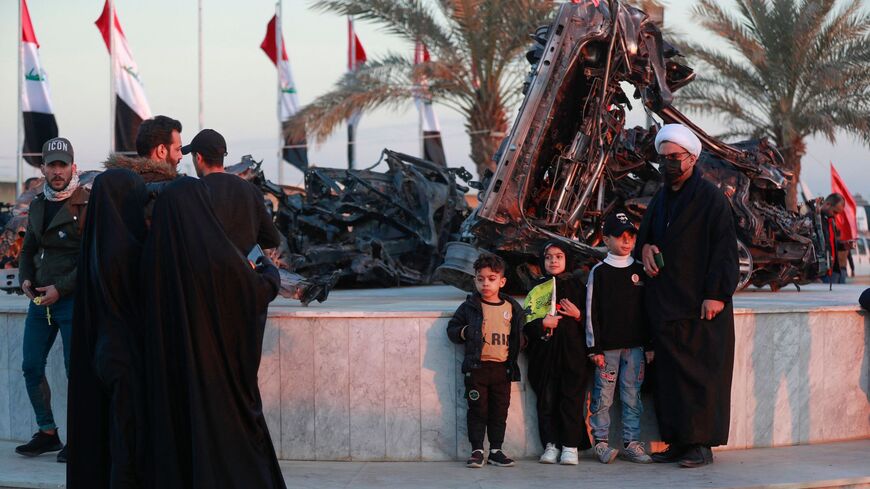 Iraqis pose for a photograph in front of the wreckage of the car in which Iranian Gen. Qasem Soleimani and his Iraqi lieutenant Abu Mahdi al-Muhandis were killed during a commemoration ceremony held to mark the upcoming second anniversary of their deaths near Baghdad's international airport on Jan. 2, 2022. - AHMAD AL-RUBAYE/AFP via Getty Images

The US-led coalition in Iraq shot down two armed drones approaching Baghdad International Airport early on Monday, a coalition official confirmed to Al-Monitor. The airport houses an Iraqi military base where coalition troops are present.

Photos of the damaged drones circulated on social media. The words “operations of the leaders’ revenge” marked the wing of one of the devices, in reference to the US assassination of Iranian Gen. Qasem Soleimani in Baghdad on Jan. 3, 2020.

The coalition’s C-RAM air defenses disabled the suicide drones around 4:30 a.m. local time, preventing any casualties or damages, according to BBC and Reuters, citing Iraqi security sources and coalition officials. No group has yet claimed credit for the attack.

What to watch for: