Pentagon spokesperson John Kirby reiterated that the United States reserves the right to retaliate for such attacks. 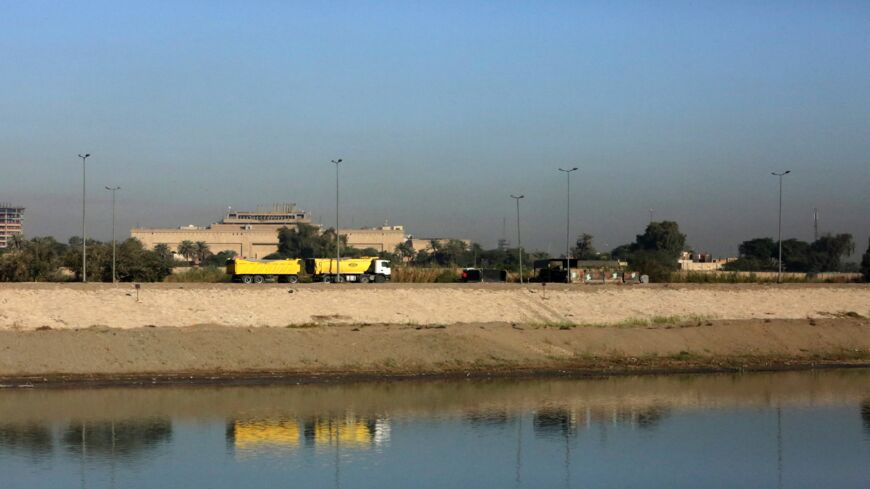 This image shows a partial view of the Green Zone, which houses the seat of the Iraqi government as well as the US Embassy, in the capital, Baghdad, on Dec. 19, 2021, after two rockets targeted the area early in the morning. - SABAH ARAR/AFP via Getty Images

A woman and child were injured in the latest rocket attack on the US Embassy compound in Baghdad’s Green Zone Jan. 13, Iraq’s military said.

The rockets were fired from the Dora neighborhood south of the capital into the fortified international zone, according to Iraq’s security media cell. One of the rockets struck a school.

The barrage is the latest in a yearslong series of such attacks broadly believed to be carried out by Iran-backed militias in Iraq.

Rocket strikes restarted last week following a monthslong hiatus that began after the Biden administration said it would withdraw remaining combat forces from Iraq by the end of last year.

Last Monday marked the two-year anniversary of the US assassination of Iranian Gen. Qasem Soleimani, a move for which militia leaders and Iranian officials have vowed revenge.

US C-RAM air defenses at the Green Zone engaged the rockets during the Jan. 13 attack, according to multiple reports, though it remained unclear how many landed at the embassy compound.

Following the attack, Pentagon spokesperson John Kirby said an initial inquiry suggested “a relatively small number” of rockets were fired and that a damage assessment was ongoing.

“We’re going to do what we have to do to protect our people,” Kirby said, adding the strikes are “obviously meant to cause harm, if not death, to our people.”

“We have made it very, very clear in other channels to the Iranians how seriously we’re taking this,” he said.

The US Embassy in Baghdad released a statement accusing “terrorist groups” of launching the attacks, which it said “undermine Iraq’s security, sovereignty and international relations.”

Qais al-Khazali, a founder of the Asaib Ahl al-Haq militia who has long sought to expel US forces from Iraq, said in a statement that Iraq's "resistance factions" had nothing to do with the Jan. 13 rocket attack.

Amid the bombardments and the COVID-19 pandemic, the coalition reduced its presence in Iraq by roughly half last year and shifted entirely to advising rather than training local troops.