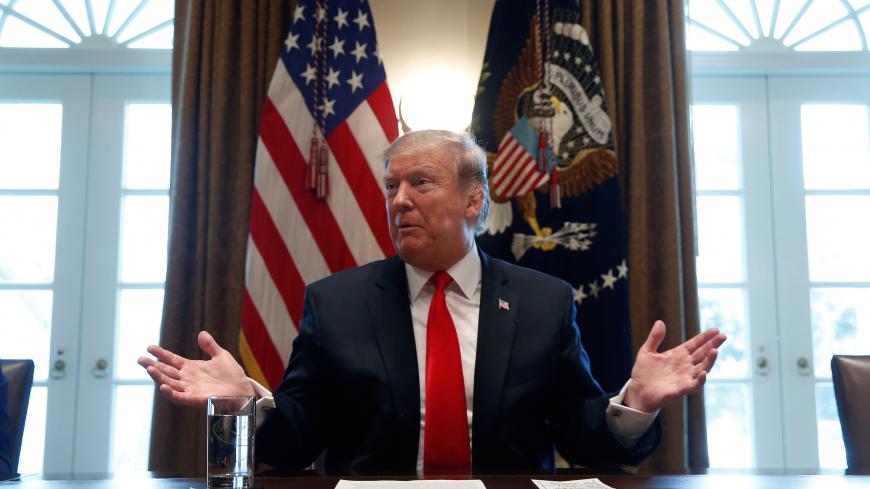 US President Donald Trump speaks during a meeting to "discuss fighting human trafficking on the southern border" in the Cabinet Room of the White House in Washington, U.S., Feb. 1, 2019. - REUTERS/Jim Young

Why it matters: Amid bipartisan push-back against his decision to pull US troops out of Syria, the president told CBS in an interview that ran Sunday that Al-Asad base in Anbar province, which the president visited just after Christmas, could deal with the Iranian threat. The comments sparked outrage from Iraqi President Barham Salih, who insisted today the US never asked permission for a wider mission beyond fighting the Islamic State (IS, also known as ISIS.)

Full quote: “We spent a fortune on building this incredible base,” Trump told Face the Nation. “We might as well keep it. And one of the reasons I want to keep it is because I want to be looking a little bit at Iran because Iran is a real problem.”

Occupying presence? The comments prompted immediate criticism on social media from Iraqi lawmakers and other officials. As Trump did not meet with Iraqi officials during his December visit, the CBS interview plays into concerns Iraqi concerns that the US sees Baghdad as a lesser partner.

Target on their backs: With his comments, the president has telegraphed to US foes that the American troop presence at Al-Asad could be used to interdict Iranian movement in the region. That could make their job a lot harder.

“If the US is perceived as being in Iraq not solely to assist the Iraqi forces in [the] fight against ISIS, it will strengthen the hand of those who oppose the US presence,” said David Witty, a retired US special forces colonel.

Nobody home: The counter-Iran aspect of Trump’s Iraq policy creates challenges for the US administration, since very few officials are left to deal specifically with Baghdad. While former ambassador to Iraq James Jeffrey recently took over as special presidential envoy to the counter-IS coalition, his dealings are mostly with the 70-nation coalition.

Matthew Tueller, a US foreign service officer who last served as ambassador to Yemen, has been nominated to serve as US envoy to Iraq, but has yet to get a Senate hearing. That has left Matthew Zais, the National Security Council director for Iraq, and Andrew Peek, the State Department’s deputy assistant secretary for Iraq and Iran, in the lead in Washington.

What’s next: Trump’s comments are sure to raise questions at the State Department’s counter-IS ministerial, which starts Wednesday.