Intel: How the Pentagon plans to use thinned-out US presence in Iraq 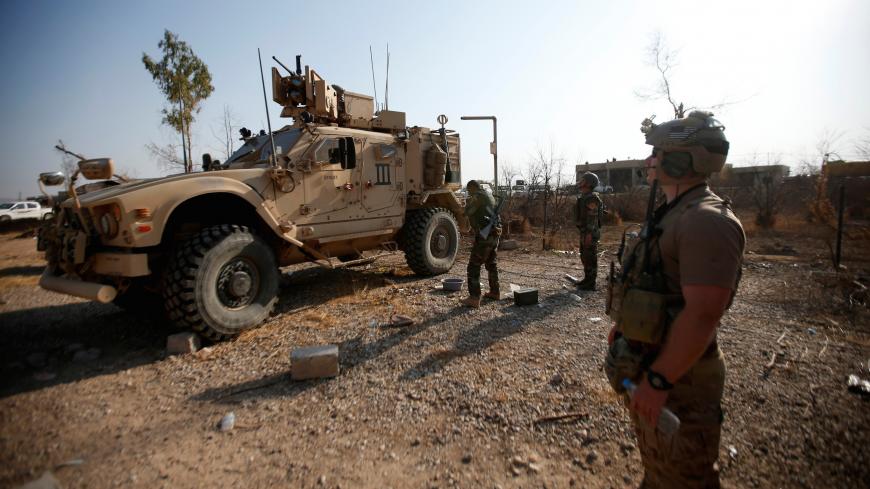 US military vehicles are seen in the town of Bashiqa, east of Mosul, during an operation to attack Islamic State militants in Mosul, Iraq, Nov. 7, 2016. - REUTERS/Azad Lashkari

Testifying before Congress today, Chairman of the Joint Chiefs of Staff Joseph Dunford said the Pentagon’s proposed 2020 budget will support an “enduring presence” of US troops in Iraq that’s “slightly less than the forces that are on the ground right now.”

Why it matters: The comments from Marine Gen. Dunford, the US military’s top officer, indicate the US plans to let Iraqi forces carry a larger load in the future as they clean up the remnants of the Islamic State (IS), which appears set to morph into an insurgency.

But that doesn’t appear to gel with President Donald Trump’s remarks last month that the United States would keep troops at Iraq’s Al Asad Air Base to “watch” Iran. Those comments sparked a firestorm in Iraq, where US troops are stationed at the invitation of the government in Baghdad. Dunford said in a prepared statement that the United States plans on “leveraging a relatively small footprint of US forces to enable local partners throughout the world.”

Light footprint: While lawmakers honed in on questions about Trump’s border wall and reported plans to start charging US allies for American troops and bases, Acting Defense Secretary Patrick Shanahan said in written testimony that the Pentagon is preparing to slim down its troop presence in the Middle East.

“We have shifted our posture in key regions, taking initial steps to economize for sustainable missions in the Middle East and South Asia to prepare for the possible high-end fight of the future,” the acting defense chief said. Experts have cited the recent deployed THAAD missile defense battery to Israel as an example of this model. The Pentagon calls that game plan “dynamic force employment,” deploying troops and assets in surprising places to keep Iran and other US adversaries guessing.

What’s next: Dunford said the United States and Iraq will have to seek a new negotiation about the status of US troops in the country. US forces are currently there under the authority of the 2001 Authorization for Use of Military Force, which covers the fight against terrorism, and Baghdad's request for US help countering IS (also known as ISIS) in 2014.

“As the Iraqi government settles and we’re prepared to enter into a conversation about what our reliable partnership will be moving forward,” he said, “then our secretary of state and secretary of defense will work out the exact numbers to meet the requirements that the Iraqi security forces will still have to ensure the lasting defeat of ISIS, which is still our collective focus.”

Know more: Read Pentagon correspondent Jack Detsch’s latest on the Defense Department’s request to cut funds for the fight against IS.