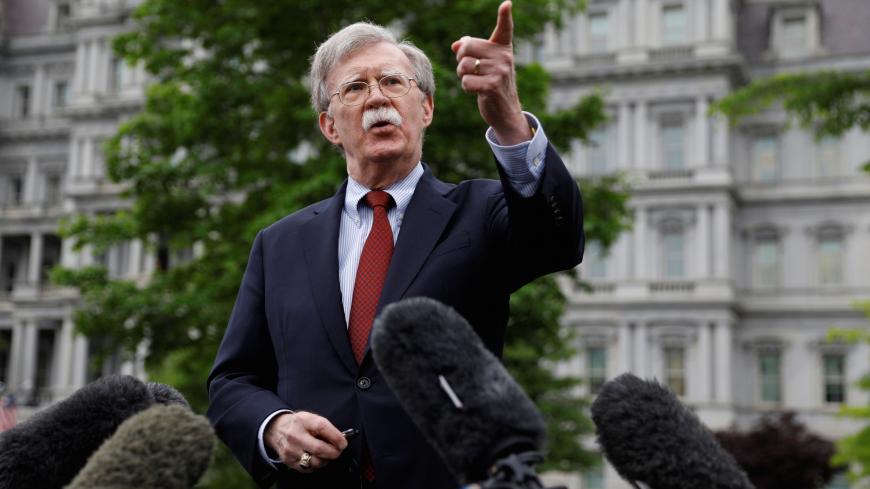 US national security adviser John Bolton talks to reporters at the White House in Washington, DC, May 1, 2019. - REUTERS/Kevin Lamarque

A day after US national security adviser John Bolton trumpeted the deployment of a US carrier group as a “clear and unmistakable message” to Iran, the US Navy’s top admiral lowered the temperature a notch this morning in a speech near Washington. Chief of Naval Operations John Richardson indicated that the deployment of the USS Abraham Lincoln group to the Middle East had been planned “for some time now” and described the move as an example of “dynamic force employment,” the Pentagon's model of sending out troops and other assets at seemingly irregular intervals to keep US adversaries off balance.

Why it matters: CNN reported today that the Department of Defense had asked the White House to send out a statement about its deployment as a warning based on intelligence about threats to US personnel as Iran weighs retaliation for Trump's “maximum pressure” sanctions campaign. Bolton responded with a statement saying the deployment of the carrier group and of an unidentified “bomber task force” to the region was in response to a “number of troubling and escalatory indications and warnings.” But in remarks at the SeaAirSpace maritime exhibition in Maryland this morning, Richardson said the carrier group was on a “scheduled deployment.”

Richardson followed up in a Twitter exchange with a Foreign Policy reporter with a link to a Pentagon news story touting the carrier group's participation in an ongoing multilateral maritime warfare exercise in the Mediterranean Sea that makes no mention of Iran. A short while later, however, Richardson wrote on Twitter that the carrier would transit to Central Command's area of responsiblity "at the direction" of Bolton and Acting Secretary of Defense Patrick Shanahan. "This is the beauty of having a dynamic force," Richardson tweeted. "The US Navy can easily maneuver to protect national interests around the globe."

In a statement on Twitter later in the day, Shanahan himself described the deployment of the carrier group and the bomber task force to the Middle East region as a "prudent repositioning of assets in response to indications of a credible threat by Iranian regime forces."

The difference in tone suggests the Defense Department may be wary of inflaming tensions with Iran.

“The US routinely deploys carriers to the Gulf as a show of force intended to deter Iran,” Becca Wasser, a RAND Corporation policy analyst, tweeted Sunday in response to Bolton's statement. The White House, she wrote, appeared to be “piggybacking” on the planned operation “to make a point.”

What’s next: The Washington Post reports this morning that the deployment of the carrier group to the Middle East will be “expedited” following Bolton's statement. The Pentagon first issued a statement on the USS Abraham Lincoln’s deployment in early April. The Pentagon has also sent a powerful US-made air-defense battery to Israel last month to ward off Iranian missiles.

Know more: The military moves come as Iran’s top diplomat appeared to offer an olive branch to the United States last week. Check out Laura Rozen’s reporting on Iran’s latest efforts to engineer a prisoner swap between the rival countries.