The chairman of the House Armed Services Committee says Congress has yet to hear back from the Donald Trump administration on how long a fresh rotation of troops, ships and planes sent to counter Iran will remain in the Middle East. 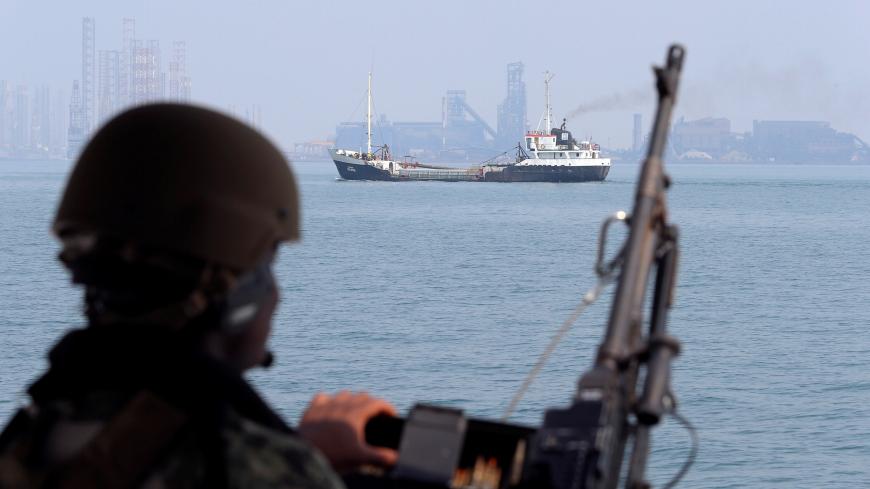 A US Navy soldier onboard a Mark VI Patrol Boat stands guard as an oil tanker makes its way towards Bahrain port in the Arabian Sea, Bahrain, Sept. 11, 2018. - REUTERS/Hamad I Mohammed

The Donald Trump administration has yet to inform Congress on how long it will keep troops, a carrier group, bombers and missile defense batteries in the Middle East that were recently sent to the region to counter threats from Iranian-backed proxy groups, the chairman of the House Armed Services Committee said today.

Just hours after the commander of US forces in the region publicly hinted at plans to restore a larger American military presence to the Middle East, Rep. Adam Smith, D-Wash., said the Pentagon had not “given us any indication of how long this is going to last or where they think they see it going.”

Smith, who is tasked with overseeing the Pentagon’s strategy to shift more troops and weapons to counter China’s growing military power, conceded that the State Department’s so-called “maximum pressure” campaign was having an economic effect on Iran. But he wondered whether the US administration’s approach could provoke an attack from Iran.

“If we’re backing them into this corner, what do we expect to get out of it? What is the negotiation? What do we want from Iran?” Smith told a gathering of defense reporters in Washington. “Do we just want a long-term battle, long-term stalemate? What’s the next step? If Iran feels existentially threatened, there’s a distinct likelihood that they’re going to lash out. And if they lash out, how do we respond?”

US officials have insisted that “maximum pressure” is not an end in itself. In recent weeks, Trump and Secretary of State Mike Pompeo have called for talks without preconditions. The administration has previously called for Iran to withdraw proxy forces around the region and meet 11 other conditions as part of any new agreement to replace the 2015 nuclear deal, which Trump abandoned in May 2018.

Gen. Frank McKenzie, the US Central Command chief, last month called for the Pentagon to send fresh troops and weapons to the Middle East in response to “specific” threats against American and allied forces. The Marine commander told The Wall Street Journal on Sunday that the arrival of the USS Abraham Lincoln carrier strike group, a fleet of bombers and 1,500 American troops “is having a very good stabilizing effect,” but did not specify what new assets he might recommend sending to the region.

Yet Smith said it remained unclear whether the administration’s plan is “having an effect on the malign activity that we want Iran to stop.” These include Tehran’s support for Syrian President Bashar al-Assad, Houthi militants in Yemen, Iraqi militias and Lebanese Hezbollah. The State Department insists that Iran’s allies in the Middle East are feeling the pain from the renewed US sanctions campaign.

Iran has slashed its defense budget by 28% since the United States renewed energy sector sanctions in November, a State Department official recently told Al-Monitor, including a 17% cut to the finances of the elite Islamic Revolutionary Guard Corps (IRGC). Diminished funding from Iran has forced Palestine’s Hamas to enact austerity measures, the US official said, adding that the IRGC also has told Iraqi proxies that it plans to cut off salaries, although Baghdad has begun absorbing more Shiite Popular Mobilization Forces into its military. The administration’s Iran envoy, Brian Hook, has also repeatedly said that Hezbollah chief Hassan Nasrallah has taken to the Lebanese airwaves in recent months in a plea for cash.

Tehran has cut down its oil contribution to Assad's government, the official added, creating a fuel shortage in Syria. And Iran also recently pared back its budget for launching cyberattacks against US allies. But the Trump administration's claims are drawing criticism from some quarters. The Financial Times reported earlier this month that the US government's estimates of Iranian defense cuts do not track with Tehran's official figures. Western diplomats told the British paper that US evidence of cuts to Hezbollah are not solid, since Iran's funding for the group does not go through official channels.

The focus on Iran is drawing criticism that the administration is taking its eye off other goals. Smith said the Pentagon needs to explain how its increased involvement in the Middle East will impact plans to pivot resources to deal with Russia and China.

“I’m pretty sure the Pentagon’s answer would be that this doesn’t change anything, the priorities are still in that order, this is a temporary situation that they’re responding to,” Smith said. “But it does raise the question of whether we’re going to have to shift our assets and resources and think more about the Middle East.”

Meanwhile, the author of last year’s Defense Department strategy that calls for making China and Russia the focus of US defense policy criticized McKenzie’s remarks over the weekend.

“This is a truly terrible idea completely divorced from America’s strategic interests,” tweeted Elbridge Colby, a former deputy assistant secretary of defense in the Trump administration. “What has possibly changed to justify this? China and then Russia remain our primary challenges. We need to focus as [Acting Defense Secretary Shanahan] has repeatedly made clear.”

Update: June 11, 2019. This story has been updated to remove an incorrect reference to reported remarks from Iranian President Hassan Rouhani.