A “campaign” of Iranian threats against US and allied forces pushed the Pentagon to send fresh troops and weapons to the Middle East last month, a top Defense Department international policy official said at an Al-Monitor breakfast today. 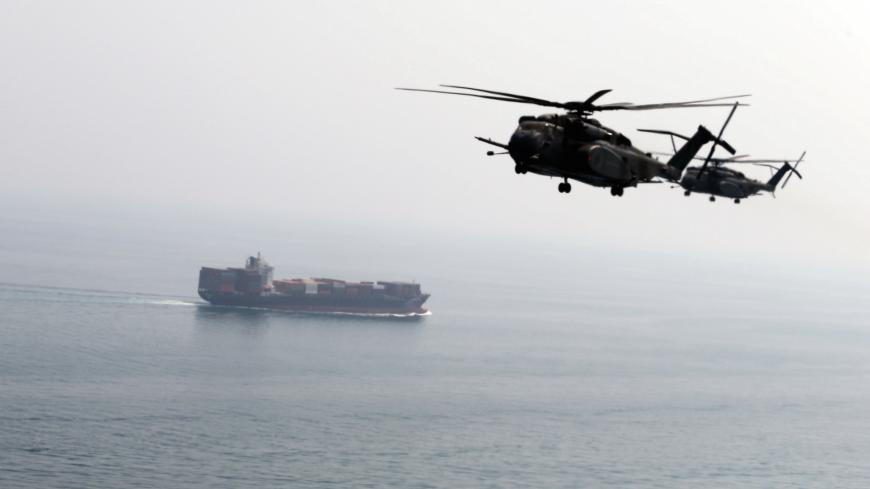 US Navy MH-53E Sea Dragon helicopters are seen making their way to an exercise area as they take part in a US and UK Mine Countermeasures Exercise taking place at the Arabian Sea, as a cargo ship is seen sailing toward the Straits of Harmoz, Sept. 10, 2018. - REUTERS/Hamad I Mohammed

The Donald Trump administration OK’d sending a bevy of fresh troops and weapons to the Middle East after receiving intelligence that signaled Iranian plans for a “campaign” against American forces, a top international policy official said today.

Acting Assistant Secretary of Defense for International Security Affairs Kathryn Wheelbarger said at an Al-Monitor Middle East Mornings breakfast event that sophisticated attacks against tankers off the coast of the United Arab Emirates last month pushed the US administration to respond by sending a carrier strike group, a suite of bombers, engineering assets and 1,500 American troops to the region.

“What we saw was more akin to a campaign against us than typical Iranian malign behavior,” Wheelbarger said. “When we had evidence that the maritime threat had been operationalized, we became concerned that the other threats would be operationalized, specifically against our forces in the region.”

Wheelbarger did not make clear how long the stepped-up American presence would stay in the region. She said she planned to call House Armed Services Chairman Adam Smith, D-Wash., to clarify the deployment after he voiced concerns on Monday. She also clarified that only one carrier, the USS Abraham Lincoln, remained in the region.

The Iranian activity comes after the Trump administration pulled out of the 2015 nuclear deal with Iran last May and re-imposed sanctions on its oil and other sectors as part of the State Department’s "maximum pressure" campaign. Wheelbarger insisted the Pentagon’s move had forced “maybe an operational pause” in the Iranian threat. She said the US surge was designed to force Tehran to “see their only option is to come to the negotiating table.”

Iran’s intention behind its nonconventional campaign is “to impose somewhat cost-effective ways to impose costs,” she said. “We have deterred them conventionally. These are the tools they have available.”

But the Pentagon’s international policy chief added that Iran-backed missiles fired at Saudi Arabia could still threaten a large community of American expats that lives in the country. The Trump administration highlighted ending Yemen’s war as the top US objective in the war-torn country, according to a recent strategy document obtained by Al-Monitor. “If the Houthis are victorious throughout Yemen the threat to their borders and sovereignty is too much for them not to address it.”

Wheelbarger said the Pentagon was considering what contributions Gulf allies could make to help stabilize the region, such as paying off US base costs and assisting with the reconstruction of Syrian areas not controlled by the regime of President Bashar al-Assad.

Wheelbarger also criticized Russia’s growing role in the Middle East since Moscow intervened in the Syrian civil war nearly four years ago, saying it was “incomprehensible” that the US administration would allow Turkey to co-locate the S-400 air defense system and the F-35 fighter jet. The Pentagon fears the Russian system could uncloak the F-35’s stealth capabilities.

The Pentagon’s international policy chief has said the United States stopped Turkish trainees from flying at Luke Air Force Base in Arizona after Ankara sent troops to train on the S-400 in Russia.

“This isn’t just one transaction, this is about [Turkey's] continued alignment and interoperability with NATO,” Wheelbarger said. “This particular system for us is an absolute no-go.” Pentagon officials have stopped short of detailing how the S-400 purchase could impact other US assets in Turkey, such as nuclear weapons stored at the Incirlik air base.

Congress, she added, expects the Trump administration to use sanctions that punish US partners for taking ownership of Russian weapons.

But if Turkey opts to take a different path — buying the American Patriot system instead of the S-400 — Wheelbarger suggested the US administration would find ways to protect Ankara from Russian retribution. “We would be seeking ways to protect the Turkish economy from any potential blowback,” she said. “Turkey is learning perhaps the hard way that Russia cannot be relied upon.”

Editor's note: This article has been updated since its original publication June 11, 2019.