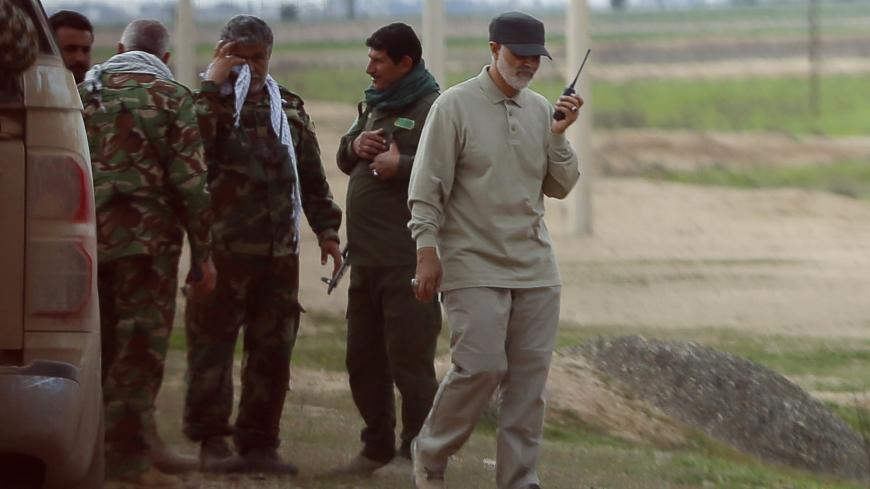 Describing the move as a “decisive defensive action,” the Pentagon insisted that the strike was aimed at deterring Iran from launching future attacks after an Iraqi proxy group fired rockets at a US base in Kirkuk and Iran-backed demonstrators breached the US Embassy grounds in Baghdad.

“General Soleimani was actively developing plans to attack American diplomats and service members in Iraq and throughout the region,” the Pentagon said in a statement late Thursday, after Iraqi state television had already confirmed Soleimani’s death in a US-led drone strike.

The Pentagon said Soleimani “orchestrated” the Dec. 27 rocket attacks in Kirkuk that the United States blamed on Khataib Hezbollah and demonstrations at the US Embassy in Baghdad. The United States insists that Soleimani has harassed and intimidated American forces for decades, helping to introduce complex improvised explosive devices into Iraq after the American invasion that caused 17% of US deaths in the conflict, according to the State Department.

Soleimani’s death, which sent shockwaves through social media, marks a major turning point for the Trump administration’s campaign to contain Iran-linked attacks in the Middle East that have spiked since the United States ended sanctions waivers for importers of Iranian oil in May.

Petroleum markets spiked by 3% on reports of the militia leader’s death, a popular figure in Iran who had once been seen as a future political star. While Trump tweeted out a pixelated image of an American flag just as the Pentagon announced Soleimani’s death, some US officials feared that the American administration was not ready for an Iranian response.

“We are ill-prepared for the consequences of this decision,” said one US official, who noted that Iran could seek to target American forces in Iraq or the US Embassy in Beirut, the Lebanese capital.

Becca Wasser, a senior policy analyst at the RAND Corporation who studies Iran, tweeted that Iran’s top targets could include Prince Sultan air base in Saudi Arabia, where the United States surged forces over the summer; Al-Udeid air base in Qatar, where 11,000 US troops are based; or the US Navy’s Fifth Fleet, based in Bahrain.

Gen. Mark Milley, the Pentagon’s top military official, said earlier on Thursday that Iran was behind as many as 15 attacks on US forces since October, but the Trump administration has spotted troubling Iranian activity throughout the Middle East over the summer.

Other US officials insisted that the Quds Force leader’s death was necessary to dislodge Iranian attack planning, but was not seen inside the administration as an escalation. “Soleimani was plotting lots of attacks — wasn’t a question of us being escalatory,” a State Department official told Al-Monitor on condition of anonymity.

But Soleimani's death immediately sparked clear-cut divisions in Congress. Trump’s allies celebrated the death of the Iranian militia leader as a restoration of US deterrence after the president twice refused to strike Iran as tensions surged over the summer.

“I appreciate President Trump’s bold action against Iranian aggression,” said Sen. Lindsey Graham, R-S.C., a close ally of the president who unsuccessfully pushed for American strikes on Iran in June after the downing of a US surveillance drone over the Gulf of Oman. “To the Iranian government: if you want more, you will get more,” he added.

But the US administration has not provided a clear-cut legal justification for recent strikes to counter Iranian provocations, including the use of precision-guided munitions on Khataib Hezbollah facilities on Dec. 29. A Pentagon spokesperson referred Al-Monitor to Esper’s comments to reporters about the authority for those strikes, but the Defense chief did not name a specific legal statute.

Democrats feared the assassination would lead to a wider regional conflict without congressional approval. House Foreign Relations Committee Chairman Eliot Engel, D-N.Y., said the administration gave Congress no notification or consultation, and that the strike would not be covered by any existing military authorization.

“The regime and its proxies have global reach that they may use to seek retribution for this strike, endangering the lives of Americans around the world,” Engel said in a statement. “And we are now again on the brink of direct confrontation in the Middle East.” Newsweek reported that the Pentagon used the 127e program to target Soleimani, an authority typically used by the United States to direct foreign troops in raids against terror targets.

The United States has added nearly 15,000 troops in the Middle East as tensions with Iran have sparked since May, including 750 Marines and soldiers from the 82nd Airborne division tasked with protecting the Baghdad embassy earlier this week.

But just as Tehran has used car bombs, assassinations and other irregular tactics in the past, in the wake of Soleimani’s death, officials fear that Iran will pursue an asymmetric response that could again catch American troops off guard with tensions set to continue rising.

“This is not the type of warfare that we’re particularly good at; Iran is excellent at it,” the US official who spoke to Al-Monitor said. “We’re about to find out just how vulnerable we are in the Middle East.”