Iran fired 15 ballistic missiles at Iraqi bases housing US and coalition troops on Tuesday night, a US Central Command spokesperson confirmed to Al-Monitor, in a possible escalation of tensions between the United States and Iran after a Pentagon drone strike killed a top Iranian military leader last week. 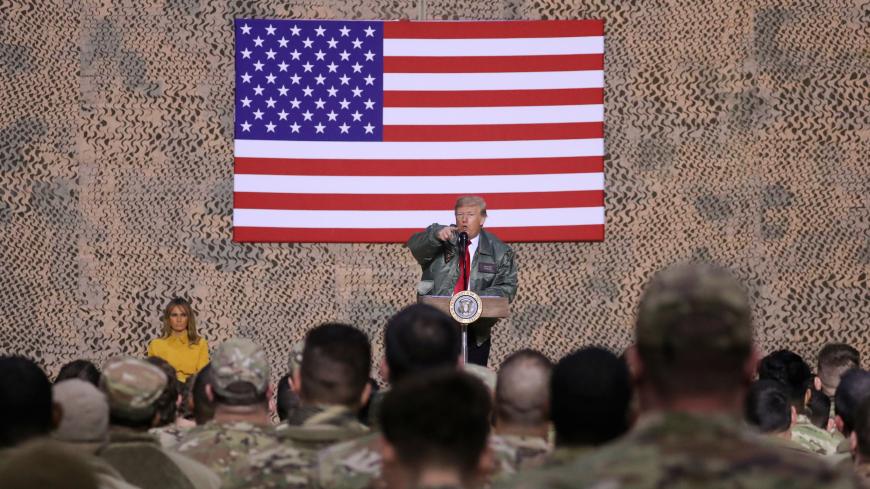 US President Donald Trump, with first lady Melania Trump, delivers remarks to US troops in an unannounced visit to Al-Asad Air Base, Iraq, Dec. 26, 2018. - REUTERS/Jonathan Ernst

Iran fired 15 ballistic missiles at Iraqi bases housing US and coalition troops on Tuesday night, a US Central Command spokesperson confirmed to Al-Monitor, in a possible escalation of tensions between the United States and Iran after a Pentagon drone strike killed a top Iranian military leader last week.

Of the 15 missiles fired, 10 struck Al-Asad Air Base in Iraq’s western Anbar province, while one struck Erbil Airport in the Kurdistan region of northern Iraq, though journalists in the area said reporting on the strike was inaccurate. Four of the missiles failed in flight, the spokesperson said.

The Islamic Revolutionary Guard Corps claimed responsibility for the strikes, the first time in recent memory that Iran has fired ballistic missiles against US targets. CNN reported that there had been Iraqi casualties in the strike on Al-Asad.

A defense official later said that the Pentagon is still conducting damage assessments and that Pentagon leadership had contacted regional and NATO allies. “All of the phone calls that were made were taken,” the official stated, batting back a report that Iraqi caretaker Prime Minister Adel Abdul Mahdi had rejected a call from Defense Secretary Mark Esper.

“All is well! Missiles launched from Iran at two military bases located in Iraq. Assessment of casualties & damages taking place now,” President Donald Trump tweeted after being briefed on the strikes at the White House by top national security aides, including Esper, Secretary of State Mike Pompeo, and Chairman of the Joint Chiefs of Staff Mark Milley. “So far, so good! We have the most powerful and well equipped military anywhere in the world, by far! I will be making a statement tomorrow morning.”

Iraq’s military reported no Iraqi casualties but cited a higher number of missiles fired during the 30-minute Iranian strike than US Central Command claimed. The attack, which lasted from 1:45 until 2:15 a.m. local time according to Iraq's Security Media Cell, saw 22 rockets fall on Al-Asad Air Base, 2 missiles fail to explode in Hitan near the Iraqi city of Heet, and 5 rockets fall in Erbil.

Tensions have mounted between Iran and the United States since the Trump administration ended US sanctions waivers for importers of Iranian oil, culminating in a tit-for-tat over the past 11 days that included an Iranian-backed strike that killed an American contractor on Dec. 27 at a military base near Kirkuk, after which the United States bombed military targets in Iraq and Syria associated with the Kataib Hezbollah militia, said to be responsible for the American's death. Days later, on Dec. 31, angry Iraqi supporters of the militia stormed the US Embassy in Baghdad.

Pentagon officials insisted that the United States had taken the proper measure to defend American troops after the strike that killed Soleimani. “We expected actions from the Iranians and we had put our forces in appropriate force protection posture,” a defense official told reporters on Tuesday. The US-led coalition fighting the Islamic State in Iraq suspended operations and enhanced efforts to protect American troops amid rocket attacks over the weekend.

Soleimani has been linked to hundreds of American deaths, including 603 US troops killed by complex improvised explosive devices introduced by Iran during the 2003 Iraq war and subsequent US occupation. Defense Secretary Esper said Soleimani and Muhandis were plotting imminent attacks against US forces, contradicting Iraqi Prime Minister Mahdi, who said the military leaders had been in Baghdad seeking to quell tensions between Iran and Saudi Arabia.

However, Iranian Foreign Minister Mohammad Javad Zarif, who reportedly has been denied a US visa to give an address on Thursday at the United Nations in New York, insisted that Iran was acting in self-defense after Soleimani’s death.

“Iran took & concluded proportionate measures in self-defense under Article 51 of UN Charter targeting base from which cowardly armed attack against our citizens & senior officials were launched,” Zarif tweeted late Tuesday. “We do not seek escalation or war, but will defend ourselves against any aggression.”