Israeli strikes raise questions about US presence in Iraq

A suspected Israeli strike against an Iran-backed convoy in Iraq has raised political doubts about the long-term American troop presence there. 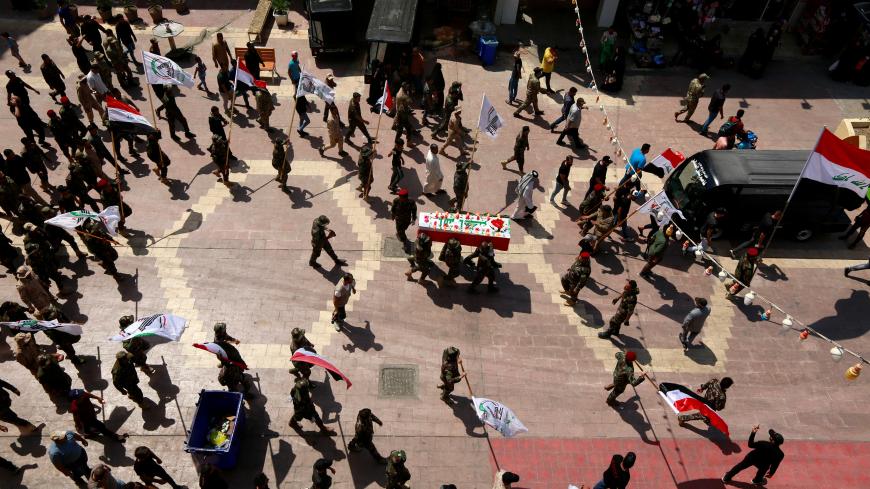 Members of the Popular Mobilization Units carry the coffin of a fighter who was killed by an unmanned aircraft close to the Syrian border in Anbar, during his funeral in Najaf, Iraq, Aug. 26, 2019. - REUTERS/Alaa al-Marjani

The likely spillover of an expanding tit-for-tat between Israel and Iran into Iraq has left the Donald Trump administration nervous about sustaining a long-term US presence in the war-weary nation.

A suspected Israeli strike against an Iran-backed convoy crossing the border between Iraq and Syria on Sunday night prompted the Pentagon to rush out a rare statement denying American involvement. The attack on the convoy, which was en route to Damascus, Popular Mobilization Units (PMU) bases and ammunition dumps, killed nine Shiite militants.

“US forces did not conduct the recent attack on a convoy or any recent attacks that resulted in the explosion of ammunition storage facilities in Iraq,” the Pentagon said on Monday. “Statements to the contrary are false, misleading and inflammatory.”

Iraqi Prime Minister Adel Abdul Mahdi and President Barham Salih quickly decried the airstrikes as an “attack on Iraqi sovereignty.” While the US military has a long-standing invitation from Baghdad to fight the Islamic State, Israel has no formal authorization to conduct cross-border attacks.

Israel has not claimed responsibility for the strikes, but the move has raised suspicions among experts that the Israel Defense Forces did not check in with the Pentagon ahead of the attacks.

The Trump administration had to deal with questions from Iraqi lawmakers about the long-term American presence in the country earlier this year, when President Trump told CBS’ “60 Minutes” in February that US troops would remain at al-Asad air base to “watch” Iran.

In the Pentagon's first press conference since August 2018, Defense Secretary Mark Esper said today that the US focus in Iraq remains "to go after" the Islamic State but did not address allegations that Israel was involved in the strikes. US officials told the Associated Press earlier this month that Israel targeted a PMU ammunition dump in Amerli in July.

But the reemergence of questions about the US presence comes as Israeli forces have started to hit Iranian proxy groups throughout the region. In the past week, the Israeli air force has also destroyed sites in Syria and exploded two drones in Beirut, prompting a stern televised speech from Hezbollah leader Hassan Nasrallah.

Israeli observers have been keen to point out that difficult political realities underlie the recent spate of attacks. Trump’s close ally, Prime Minister Benjamin Netanyahu, faces a tight reelection race in little over two weeks, after the Israeli leader was unable to secure a majority of seats in the Knesset earlier this year.

"Elections,” said Alon Pinkas, a former chief of staff to Israel’s prime minister, when asked about the motivation for the strikes. An Israeli security source told Al-Monitor earlier this week that Iran’s intensification of belligerence against Israel was “all Soleimani,” in reference to Qasem Soleimani, the commander of Iran's Quds Force.

Pinkas, who was a foreign policy adviser to Prime Minister Ehud Barak, said the strikes inside Iraq were unlikely to deter the Iran-backed PMU from operating in the war-torn country, where Israel has limited experience in operations since striking a nuclear reactor there in 1981.

"How could they? With random bombings every four to six weeks,” he said. “Netanyahu can’t even change the Iranian dynamics is Syria, a few miles from the Golan Heights. And that’s after bragging shamelessly about his close relationship with Putin and how Trump does what he wants.”

But experts said Israel’s suspected hand in the attacks could strengthen Iran-backed forces in the country in the short-term, giving them political leverage to shirk Baghdad’s efforts to assert more control.

“This is just contrary to US national interests in Iraq in all kinds of ways,” said the former US official, adding that Iran-backed groups “have the upper hand now. They’re now seen as the martyrs to the Israelis, which gives them a lot of moral capital.”