Saudi Arabia is making overtures to Iraq as Iran's influence expands in the region. 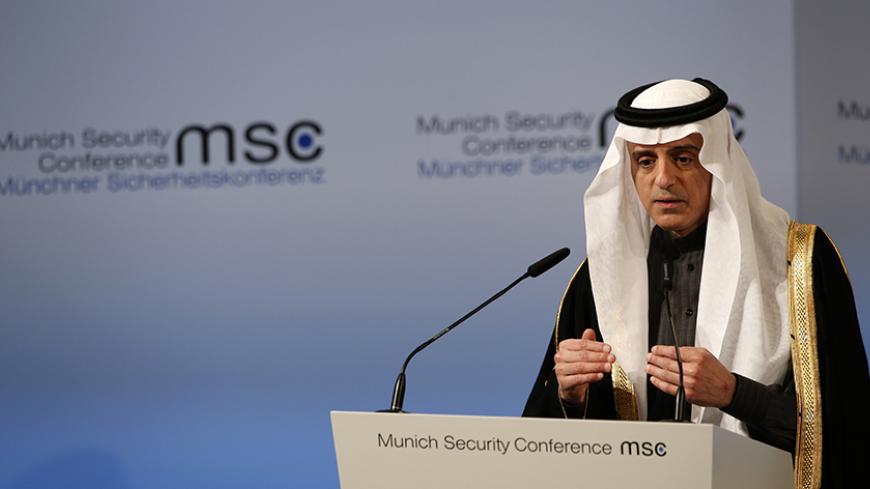 NAJAF, Iraq — Saudi Foreign Minister Adel al-Jubeir made an unannounced visit Feb. 25 to Baghdad, seeking to re-establish long-severed ties with Iraq, perhaps with an eye toward the Saudi role in the region once the Islamic State (IS) is defeated.

This visit is the first by a top Saudi official since 1990, when then-Foreign Minister Saud al-Faisal came to Baghdad along with King Fahd to attend the Arab summit. Saudi Arabia did send its ambassador, Thamer al-Sabhan, to Iraq for the first time in June 2015 after 25 years of severed diplomatic relations. Sabhan, however, left Baghdad last year at the request of the Iraqi government and no replacement was appointed.

Jubeir said his country will appoint a new ambassador to Iraq soon and is looking forward to forming economic ties on different levels with Iraq.

“Saudi Arabia is looking to build special relations with Iraq, and there is a desire to work together in the war on terror,” Jubeir said during a press conference with his Iraqi counterpart, Ibrahim al-Jaafari.

The pertinent question, however, is what took so long? What made Saudi Arabia wait all these years since Saddam Hussein was overthrown in 2003 to seek special relations and cooperation with Iraq in the war on terror?

Why did the kingdom not take a similar stance when Iraq was most in need of help from neighboring countries when jihadi groups were spreading in the country between 2005 and 2007, and when IS took control of one-third of Iraqi territories and Baghdad was on the verge of falling in 2014?

Saudi Arabia might be thinking of arrangements for the post-IS period and is seeking to extend its influence in Iraq to find a balance with the broad Iranian influence.

Saudi rapprochement with Iraq comes in the context of the US administration's keenness on curtailing Iran's role in Iraq. US President Donald Trump discussed in a Feb. 10 phone call with Iraqi Prime Minister Haider al-Abadi the “threat Iran presents across the entire region,” according to a White House Information Office statement.

Trump has criticized the policy of his predecessor, Barack Obama, for allowing Iran to extend its influence, tweeting, “Iran is rapidly taking over more and more of Iraq, even after the US has squandered $3 trillion there.”

US Secretary of Defense James Mattis has called Iran “the biggest state sponsor of terrorism in the world.” Mattis visited Iraq a few days prior to Jubeir’s visit, where he said during his meeting with Abadi, “We came here to support Iraq and emphasize the continuation of relations and support in the post-IS period.”

Abadi appeared confident when he told Mattis that there are no foreign forces fighting in Iraqi territory (in reference to the Iranian military presence), adding that “there are only advisers, while the Iraqi forces are the ones who are fighting and achieving victories.”

Louay al-Alawi, the head of the Iraqi Foreign Ministry Office, said Jubeir’s visit entailed talks related to “issues of regional security, terrorism and the situation in Syria and Yemen, as well as Iraq’s stance regarding these countries and its relations with Iran.”

Jubeir’s visit comes as Iraq is making an intense effort to improve its relations with neighboring countries. Turkish Prime Minister Binali Yildirim also paid a visit to Baghdad in January.

Abadi tasked the Iraqi intelligence apparatus with improving relations in the region, Al-Monitor learned from an intelligence source who asked not to be named.

Saoud al-Rayyes, the editor-in-chief of Saudi newspaper Al-Hayat, believes “the visit of a senior Saudi politician such as Jubeir to Iraq holds great meaning. [Saudi Arabia] is reaching out to bring Iraq back to its Arab milieu, after Iran has sought to set a wall between it and its Arab brothers.”

He added, “However, there are some parties that do not wish to see Saudi Arabia entering Iraq. Those are still controlled by Iran and seek to sabotage Iraq’s relations with its Arab [neighbors], especially Saudi Arabia."

In the same vein, Qais al-Khazali, the head of the Iran-backed Asaib Ahl al-Haq militia, said Jubeir visited Baghdad to address concern over the Popular Mobilization Units’ (PMU) significant role and its future.

Jubeir’s visit also has great significance in terms of Iraq’s role in Syria. There have been indications that the United States would like to give Iraq a role in the fight against IS in the Syrian territories as well.

On Feb. 24, Abadi ordered the Iraqi air force to “strike IS sites in Husaybah [in Iraq] and in Abu Kamal inside Syria,” according to a statement issued by the prime minister’s office, which noted that the operation was carried out successfully.

There is a joint vision among Iraq, Saudi Arabia and the United States to neutralize the role of Shiite militias affiliated with the PMU, to prevent them from moving beyond Iraqi territories and advancing Iran’s agendas in the region.

Last year, Abadi merged all the PMU militias into an official government security institution under his direct leadership and integrated Sunni militias into the PMU to create a political balance, ward off Iranian influence and prevent them from carrying out military missions outside the official framework of the Iraqi government.

Although the PMU agreed to operate under Abadi's leadership, some Iran-affiliated militias did not hide their dissatisfaction with some of his policies, noting that they are not obliged to follow his orders beyond the Iraqi territories.

Seyed Ali al-Yaseri, the secretary-general of the paramilitary group Saraya al-Khorasani, known for its absolute loyalty to Iran, said in a televised interview Feb. 24, “We were not founded by the Iraqi state. It is true that we are a brigade under the PMU, but we also have three other brigades outside the framework of the Iraqi government. Those fight wherever necessary, be it in Syria or Yemen or elsewhere.”

Saudi Arabia's attempt to find a foothold in Iraq will depend on the result of Iraq's election in early 2018. If Abadi stays in office as Iraqi prime minister for another term, the Saudis have a chance to create influence in Iraq, at least in the Sunni areas, but if an Iranian-backed candidate wins the office, the Saudis are unlikely to achieve that goal.