What role will Iran-linked militias play once IS leaves Iraq?

Despite Iraqi government attempts to control Shiite militias within the Popular Mobilization Units, the groups still are ready and willing to confront Israel and Saudi Arabia outside of Iraq. 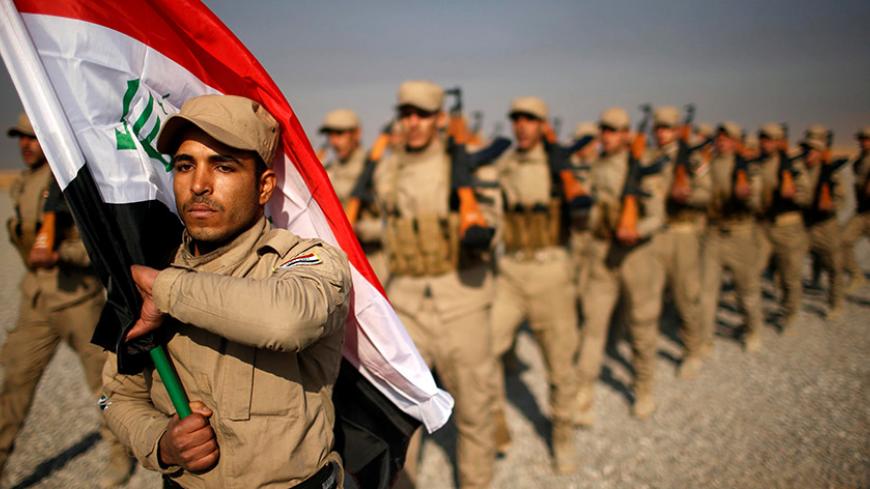 Iraqi Prime Minister Haider al-Abadi said recently that any group taking up arms in Iraq outside the state's official framework will be considered outlaws. However, it seems at least some of the factions fighting under the banner of the Popular Mobilization Units (PMU) in Iraq would not obey Abadi's order.

On March 22, Abadi spoke at a meeting of the Global Coalition to Counter ISIS (Islamic State, or IS) in Washington. Also during his trip, he told the media that IS will be eliminated from Iraq's cities "within weeks."

What will happen then? Hashim al-Musawi, the spokesman for Iran-controlled, Shiite Iraq militia known as the Islamic Resistance Movement in Iraq (al-Nojaba), announced earlier in the month the formation of the Golan Liberation Brigade. But the announcement appeared to be more a declaration that Iran-affiliated Iraqi militias will be ready to take on a greater role in the region once IS is gone. (In addition, Musawi threatened to take military action against Turkish forces stationed near Mosul if they refuse to leave Iraq.)

The brigade announcement carried great symbolism, as the press conference was held in the office of the Iranian news agency Tasnim, which supports the Islamic Revolutionary Guard Corps (IRGC) in Tehran.

Musawi also criticized the United States and Saudi Arabia, stressing that al-Nojaba “will not drop its weapons as long as the region is still threatened." Al-Nojaba will continue its endeavor to reclaim the Golan Heights in Syria from Israel, he added.

Three days after this announcement, a leader of al-Nojaba had something to say on the subject. The militia's secretary-general, Sheikh Akram al-Kaabi, said March 11, “The Golan Liberation Brigade's formation is not propaganda, but one of the Islamic resistance’s true objectives.” He added, “The resistance is capable of beating the 'axis of evil' and the Zionist entity," referring to Israel, Saudi Arabia and the United States.

This isn't the first time Iran-affiliated Iraqi parties have talked about taking action outside Iraq, in line with Iran’s foreign policy in the region.

These statements seem to be a response to the US escalation against Iran, which began after US President Donald Trump was elected in November and is echoed in Turkey, Israel and Saudi Arabia.

Meanwhile, some Iran-influenced Shiite factions fighting under the PMU umbrella have full loyalty to the Iranian regime and its supreme leader, Ayatollah Ali Khamenei.

Iraqi militias loyal to Iran, such as al-Nojaba, Asaib Ahl al-Haq, Saraya al-Kharasani and Kataib Hezbollah, play a dual role in Iraq and the region. On one hand, they operate under the PMU, which is part of the Iraqi armed forces. On the other hand, the militias are involved in the Syrian war, following direct orders from Iranian leadership.

The secretary-general of Saraya al-Kharasani, Ali al-Yasiri, said in a Feb. 24 TV interview, “We have brigades fighting under the banner of the PMU, but we also have three other brigades outside of the PMU." He added, “Wherever we are needed, we will be. We operate based on the resistance’s best interest.”

And it is clear that Iran’s supreme leader is the one who determines “the resistance’s best interest."

A report published March 10 by The Independent confirms the presence of the IRGC and allied Shiite armed groups in the part of the Golan Heights controlled by the Syrian regime. Commenting on Iranian action near the 1967 armistice line of the Golan Heights, Israeli Prime Minister Benjamin Netanyahu said in a March 9 meeting with Russian President Vladimir Putin, “We do not want Islamic terrorism led by Iran to replace Sunni Islamist terrorism [IS].”

Israel appears to be taking the threats made by Iran and its Shiite armed groups quite seriously. In response, it carried out airstrikes Jan. 8 against Hezbollah positions in the Golan Heights, killing a number of Lebanese and Iranians there.

Michael Knights, a prominent military and security expert and a fellow at the Washington Institute, told Al-Monitor, “Israel has proven its military capability to confront the Lebanese Hezbollah in the Golan Heights." He added, "Israel is expected to confront other Shiite forces there just as strongly, which will lead to an armed struggle between Iraqi citizens and Israel for the first time since 1991.”

Raising the banner of resistance, especially in terms of eliminating Israel, provides Iran’s Shiite militias with a "legitimate" cover, giving them wider freedom of movement in the region.

The goal of liberating the Golan Heights "provides justification for the expansion of these militias outside of the Baghdad government’s control, in light of its great propaganda potential," Knights said. "This paves the way [for Shiite militias] to achieve their mission and adopt a foreign policy, independently of the Iraqi state."

These militias are aware of the movement restrictions inside Iraq in the post-IS phase. They are further restricted by the PMU law, and authorities in Najaf have repeatedly called for weapons to be confined to state forces. However, this does not mean the factions strictly abide by the Iraqi state’s orders. In the event of any existential threat against Iran, these factions will follow Iran’s lead and attack the United States and its allies in Iraq to keep anything from harming Iran, as they did during the US occupation of Iraq.

The wars raging in Syria and Yemen provide a suitable environment for these forces to expand and play an important role in preserving the Islamic regime in Iran in the future. Based on their ideology, these forces are ready to play any military role the Iranian leadership assigns to them. This may include moving toward Yemen, confronting Saudi forces or Israelis in the Golan Heights, or even attacking Turkish forces in Iraq.