As calls for disbanding Iraq's PMU rise, its influence expands

The voices of Iraq's Western allies are rising against the Popular Mobilization Units, demanding the dissolution of these forces, while the PMU is expanding its influence in the Iraqi state, making Prime Minister Haider al-Abbadi face tough choices. 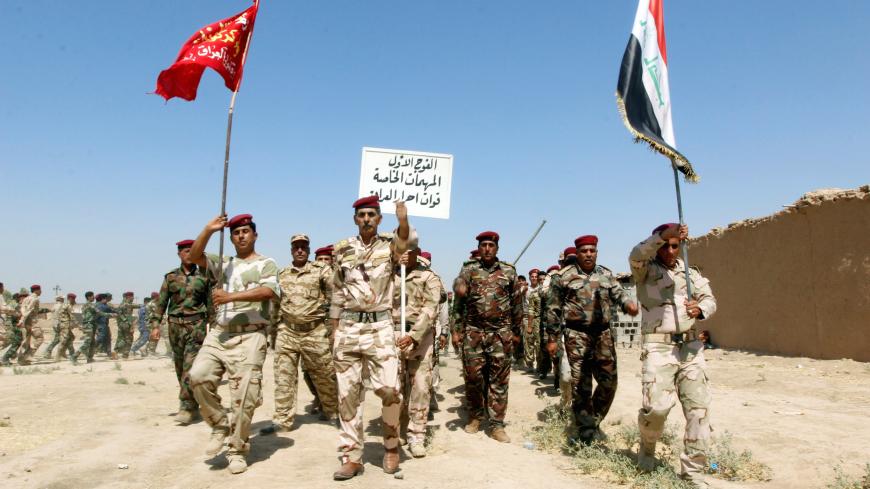 While the Iraqis' Western allies fighting the Islamic State (IS) are demanding that the Iraqi government dissolve the Popular Mobilization Units (PMU), the PMU factions are expanding their influence in the Iraqi state.

In his meeting with Iraqi Kurdistan Prime Minister Nechirvan Barzani on Dec. 2, French President Emmanuel Macron called on the Iraqi government to dismantle all militias, including the PMU. Macron said, “It is essential that there is gradual demilitarization, in particular of the PMU that established itself in the last few years in Iraq, and that all militias be gradually dismantled.”

CIA Director Mike Pompeo said in a speech before the defense forum of the Ronald Reagan Presidential Foundation and Institute on Dec. 2 that he sent a message to the leader of the Iranian Quds Brigades, Qasem Soleimani, and warned him and the Iranian leadership of any potential attacks from the pro-Iran PMU on US interests in Iraq.

On Oct. 2, US Secretary of State Rex Tillerson, following a joint meeting with the Iraqi and Saudi leaders, said that now the war on IS is over, Iranian-backed militias and their advisers must go home.

The statements raised the ire of the pro-PMU axis in Iran and Iraq. Vice President and former Prime Minister Nouri al-Maliki considered the French statement “an absolutely unacceptable intervention.” He said that such stances from France are not welcome and that they infringe on the sovereignty of Iraq and its institutions.

Shiite members of parliament and PMU leaders such as Ahmed al-Asadi, the former PMU spokesman, responded angrily to Macron’s statements and to similar talk demanding the dismantlement of the forces. They considered the PMU a legitimate Iraqi power that no one can call for the disbanding of.

Ali Shamkhani, the secretary of the Iranian Supreme National Security Council, said Dec. 4 during a meeting with Humam Hamoudi, the first deputy speaker of the Iraqi parliament, “The recent demands to disband the PMU indicate a new conspiracy to wreak havoc.”

He added, “The awareness of Iraqi officials — especially members of parliament — foiled the conspiracy plotted by Iraq’s enemies to target the consensus and internal security.”

Mohammad Golpayegani, the director of the office of Iran’s supreme leader, indicated that Solemani will not receive or read Pompeo's message to him. Golpayegani said, “Soleimani is not interested in talking to the Americans.”

Pompeo announced the letter because Soleimani did not receive it, and the CIA director wanted to deliver the content to the Iranian leadership publicly. Pompeo said in his Dec. 2 speech at the Reagan Presidential Foundation, “What we were communicating to him in that letter was that we will hold him and Iran accountable for any attacks on American interests in Iraq.”

He added, “We wanted to make sure he and the leadership in Iran understood that in a way that was crystal clear."

However, Pompeo did not reveal the mechanisms that will be taken if armed groups in Iraq or Syria whose identities are unknown attack US forces. Iran normally adopts this method to attack US interests by avoiding direct confrontation and using varying groups with unknown names.

Iranians have sent threats to the Americans that their bases in the region will not stay safe. In an international conference in Tehran Dec. 3, Ali Akbar Velayati, the senior adviser to the Iranian supreme leader, said, “The United States and its allies will soon be uprooted from Iraq and the whole region.”

He said the Americans have built 12 military bases in Syria and plan on multiplying their forces to 10,000 soldiers. He said, “They should know that they will be defeated. They want to keep Raqqa, but they will soon realize that they will be kicked out, just like they were in Abu Kamal.”

The statements of Western leaders against the PMU led PMU leaders to try to quickly expand their political power to protect themselves against any decision to disband them.

Hassan Salem, the head of al-Sadiqoun parliamentary bloc affiliated with the PMU’s Asaib Ahl al-Haq, said Dec. 6 that a new alliance including the PMU factions will be formed under the name “Mujahedeen” to actively participate in the upcoming elections. The PMU law that was approved in parliament in 2016 prohibits the factions from participating in elections. Prime Minister Haider al-Abadi has said repeatedly that military forces, including the PMU, cannot participate in elections.

It is expected that the PMU leaders running in the elections will resign from the PMU to pave the way for their participation and avoid confrontation with Abadi and violation of the law. However, this does not mean their influence in military factions will vanish. The resignations will be just for show to protect the PMU from any action from the next parliament or government. The PMU will also try to effectuate its policies through its representatives and allies in parliament and the government.

Maliki said his bloc, the State of Law Coalition, will ally with the PMU in the upcoming elections. Therefore, the PMU and its allies have a good chance of taking the reins of the upcoming government and winning a parliamentary majority.

Abadi’s choices concerning the PMU’s ambitions seem limited. He must adopt more felixibility in terms of the PMU to try to ensure that he stays in his position as prime minister, which then will put him at odds with the United States and its allies demanding the dismantlement of the PMU.