Is Tehran trying to distance Qasem Soleimani from Iraq?

The recent visit of Iranian President Hassan Rouhani to Iraq has been read as attempt to distance Quds Force commander Qasem Soleimani from Iraq, replacing him with the Foreign Ministry. 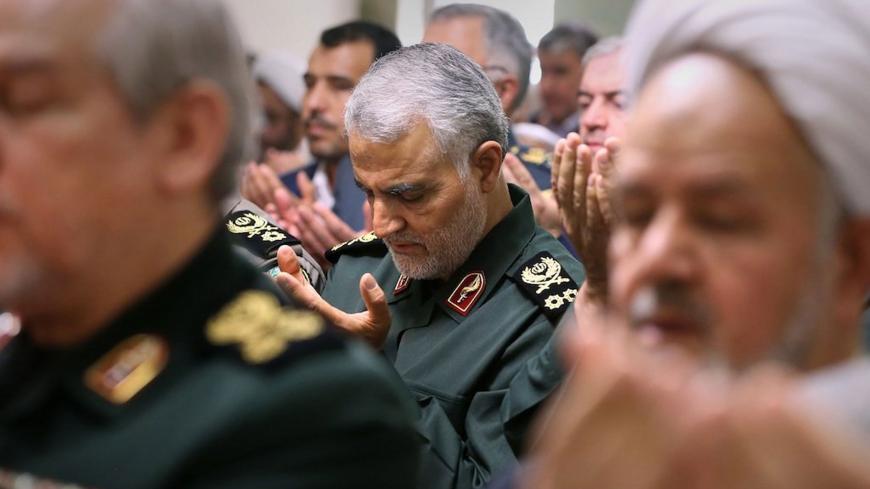 As more factions within Iraq’s Popular Mobilization Units (PMU) are being designated as terrorists by the US administration on account of their close ties with the Iranian side, Tehran is moving toward pulling the Iraqi file from the Islamic Revolutionary Guard Corps (IRGC) and leaving it with the Foreign Ministry, local reports say.

This reported shift in Iranian policy would seek to address a number of critical concerns — none more important, perhaps, than protecting the PMU, which is striving to repurpose itself as a fully-fledged security institution, especially after Washington explicitly told Iranian authorities that supporting militias in Iraq must come to end as part of 12 requirements outlined by Secretary of State Mike Pompeo in November for the lifting of US sanctions.

Ever since, Iran’s fundamentalist and reformist spectrums have clashed over the causes and pathways out of the sanctions crisis. Iranian Foreign Minister Mohammad Javad Zarif’s Feb. 25 resignation announcement could be read as his way of protesting the apparatus of the Guardianship of the Islamic Jurist (Iran’s Supreme Leader Ali Khamenei) and its overwhelming influence over Iran’s foreign relations, whereas his agreeing to continue in his post was the result of Khamenei having the IRGC cede control of the very same file in favor of Iranian President Hassan Rouhani’s government, who was afforded wider powers with respect to handling and developing Tehran’s foreign relations. This, seemingly, was to the liking of Iraq’s highest Shiite authority, Ali al-Sistani, who agreed to meet Rouhani at his home in Najaf after refusing to meet with the IRGC's Quds Force leader Qasem Soleimani on numerous occasions.

In his March 11-13 visit to Iraq, Rouhani made sure to meet with the majority of the Iraqi leadership, including PMU commanders who enjoy cordial relations with Soleimani. Those included, most notably, Falih Alfayyadh, chairman of the PMU, and his aide Abu Mahdi al-Muhandis. “The PMU serves a critical role in bolstering Iraq’s national solidarity,” Rouhani stressed.

He also hailed "the PMU’s gallantry and sacrifices on the path of combating terrorism and establishing security and stability in Iraq,” adding that “combating terrorists in Iraq has become a reality thanks to the gallantry of the Iraqi people, who were a source of pride for Muslims and the Islamic world.”

Meanwhile, Alfayyadh described Rouhani’s visit to Iraq as significant and coming "in the context of serving the interests of the peoples of both countries,” noting that “improving bilateral relationships between Iran and Iraq sets the stage for major developments in the region.”

Additionally, the Alghad press quoted a high-ranking source as saying IRGC Quds Force commander "Qasem Soleimani accompanied President Hassan Rouhani on his Iraq visit,” where Soleimani “met with political leaders” and “implored them to hasten the process of forming the government of Prime Minister Adel Abdul Mahdi and avoid getting dragged into a Shiite-Shiite conflict that only serves the plans of the US.”

Alghad also reported, “Solemani informed the Shiite political forces of an endeavor in the form of an US-Israeli-Arabic lobby to weaken the PMU and the Islamic resistance factions ahead of labelling them as criminals.” However, Soleimani stressed that “Tehran will not let the PMU be dismantled, disbanded, weakened or criminalized, no matter the cost.”

Al-Monitor has attempted to find out the details of the Rouhani-Alfayyadh meeting in light of anticipated developments in the relations between Baghdad and Tehran. A well-informed source, who spoke on condition of anonymity, told Al-Monitor, “Iran’s delegation, which was led by President Hassan Rouhani, had no special messages to impart to the PMU leaders,” saying, “It was simply a by-the-book meeting that included no secret talks.”

The same source confirmed Soleimani's presence in Iraq during Rouhani’s visit to Baghdad, saying, “Soleimani has provided plenty of support for the Iraqi forces in its war on IS’ terrorism.” The source stressed that “only the Iraqi government can dictate the format of support and cooperation with neighboring countries.”

Nonetheless, the statement released by Sistani in the aftermath of the meeting with Rouhani said a discussion over the future of the armed factions in Iraq took place with the Iranian delegation. Sistani, according to the statement, told Rouhani that the most important challenges Iraq faces are “combating corruption, improving public services and liming arms possession to the state and its security apparatuses”; the ayatollah also expressed hope that “the Iraqi government will make acceptable progress on those fronts.”

Sistani issued a fatwa in 2014 that came to be known as the “Al-Jihad al-Kifa’ie” (call to arms) to fend off the Islamic State (IS), which had stormed Mosul. The fatwa was the grounds for the establishment of the PMU, even though Sistani didn’t use the term “popular mobilization” to refer to the individuals who responded to his fatwa; he called them “volunteers” over the years. Some Shiite figures speculate that Sistani is prepared to issue another fatwa to end the “jihad” as the country has been liberated from IS.

No matter the actual implications of such a fatwa on the future of the PMU, or even of Rouhani’s goals in his visits with Sistani and other Iraqi leaders, Iran is not expected to abandon its allies in the region — most notably the PMU and any pro-Iran factions — at a time when Washington is endeavoring to undermine Tehran before dragging the Iranians to a new round of nuclear talks.

Even if the Iraqi file may have been taken from the hands of Khamenei (represented by the IRGC) and given to Foreign Ministry, the state of affairs as it concerns Iraqi-Iranian relations will remain unchanged.

US sanctions have been the main cause of the dispute between Iran’s fundamentalist and Reformist spectrums, as the latter sees the fundamentalists as responsible for Washington’s decision to withdraw from the nuclear deal and reinstate sanctions as a direct result of the military aspect taking center stage in Iran’s relations with its neighboring countries, especially Iraq.

Meanwhile, Iran is trying to replace this archetypical image of its regional relations, even in part, in the hopes of leaving a positive impression on its global perception and eventually finding a way around the economic sanctions.