SDF commander lays out conditions for reconciliation with Damascus 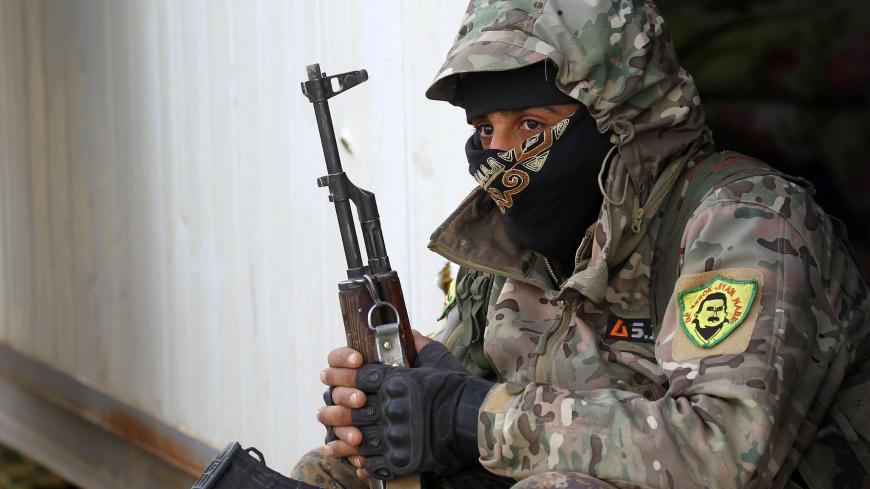 A fighter from the Syrian Democratic Forces (SDF) holds a weapon in the village of Baghouz, Deir Al Zor province, Syria, March 17, 2019. - REUTERS/Stringer

Kobane: “No enmity with regime”

Mazlum Kobane, commander in chief of the Syrian Democratic Forces (SDF), the US military’s Syrian ally in the battle against the Islamic State (IS), laid out his demands for reconciliation with the Syrian government in an exclusive interview with Amberin Zaman at al-Omar oil field in Syria.

Kobane said, “We are ultimately part of Syria. We do not wish to separate from Syria. If there is to be a lasting solution for this region, it needs to be with Damascus. Negotiations with the regime are inevitable, and these need to happen.”

We have two principal demands,” Kobane said. “One is that our autonomous administrations here be preserved and accorded legal status. The second is that the SDF be preserved. The security of the territory east of the Euphrates River should be left to the SDF. These are our red lines. We are willing to engage in all kinds of negotiations with the regime on this basis.”

Kobane added that while he is not personally involved in talks with Damascus, “Our political delegations are meeting. We always were in dialogue with the regime. In fact, actual negotiations started, but they are now deadlocked. We are very clear. We presented them with a road map. And if they refuse to accept our demands, even if we are left on our own, even if the coalition withdraws, we will fight. We will fight to the death for our rights.”

Kobane stressed, “We need to make a deal with the regime, for sure. But it needs to be in alliance with the Arabs within the framework of a united Syria. The regime now talks about reconciliation. First of all, we did not go to war with the regime. The regime pulled out of these territories and was unable to defend them. So we defended them. Given that there is no enmity between the regime and ourselves, there is no need for us to reconcile with the regime.”

"We need to make a deal with the regime, for sure. But it needs to be in alliance with the Arabs within the framework of a united Syria." -Mazlum Kobane

Syrian Defense Minister and Deputy Commander-in-Chief of the armed forces Gen. Ali Abdallah Ayoub noted March 18 that the “SDF is the last remaining card held by US troops, and Syria will deal with them either through reconciliations or by liberating the land,” according to the Syrian Arab News Agency.

Kobane said he understood why the Donald Trump administration wants the Kurds to hold off on talks with the Syrian government, saying, “We, too, want governments in Syria to be democratically elected. We will respect whichever government is democratically elected to lead Syria because we are a part of Syria. This may seem far-fetched for now, but sooner or later it will come to pass.”

The SDF commander also said that a Turkish military intervention could “unleash the second great war in Syria … and we have prepared for one." He continued, "It’s not easy. This isn’t Afrin. It’s a large area and there are many forces. And the intersection of international interests is different here. In Afrin, Turkey did a deal with the Russians. The Americans sat on their hands. Everyone is interested in this region. There are Russians in part of Manbij, in Arima. If Turkey intervenes, everyone will intervene. The situation will get extremely complicated. Turkey failed to get the green light from anybody to intervene here so far and will fail to do so in the future. But as I told you earlier, we are not in favor of any war with Turkey. After eight years of war in Syria, we want peace.”

State Department: No place in Iraq for "mafia-like" groups backed by Iran

Natali said that while the United States appreciates “the courageous efforts of the Iraqi Security Forces, the Kurdish peshmerga and Hashid Shaabi [also known as Popular Mobilization Forces]” in defeating Daesh (IS), “there has been a proliferation of undisciplined armed actors that are not under the control of the state. That does not mean all Popular Mobilization Forces. They have officially been incorporated into the Iraqi government in 2016. I am talking about those armed actors that are not. I think it is important to differentiate between the disciplined and the undisciplined. That has been a useful way that Iraqis themselves can refer to this problem and then target the problem. But where there are undisciplined armed actors not under the control of the state — that has become one of the biggest impediments to stabilization assistance moving forward, in addition to the lack of security or the lack of services.”

“The IRGC [Islamic Revolutionary Guard Corps] is in so many of Iran's industries that people need to be very careful, the Iraqis included, about who they do business with,” Peek told Al-Monitor, adding, “If they are doing business with an IRGC business, they are liable for sanctions. So while we [the United States] want a normal relationship, this is something that in terms of legally that they [Iraq] just have to keep in mind.”

The focus on the IRGC and "undisciplined armed actors" walks back previous broad-brush criticism by Washington of all the PMU as beholden to Iran. Such characterizations often made life harder for Iraqi leaders, who seek to stay out of the crossfire between the United States and Iran. Many of the PMU also have popular standing in Iraq for their role in the fight against IS.

Iran may be getting the message that Iraq prefers more normal engagement with Iran. This may have been one of the outcomes of Iranian President Hassan Rouhani’s visit to Iraq March 11-13. Omar Sattar suggests that “as more factions within Iraq’s [PMU] are being designated as terrorists by the US administration on account of their close ties with the Iranian side, Tehran is moving toward pulling the Iraqi file from the [IRGC] and leaving it with the Foreign Ministry, local reports say.”

“This reported shift in Iranian policy would seek to address a number of critical concerns — none more important, perhaps, than protecting the PMU,” added Sattar, “which is striving to repurpose itself as a fully fledged security institution, especially after Washington explicitly told Iranian authorities that supporting militias in Iraq must come to end as part of 12 requirements outlined by Secretary of State Mike Pompeo in November for the lifting of US sanctions.”

There is also the continuing threat from IS terrorists in western Iraq, including those who have fled the fighting in Syria. “The Iraqi security forces have expanded their operations to track down members of IS in the vast Western Desert,” Hamdi Malik reported. “Joint Iraqi military divisions and the local tribal regiments are conducting a security sweep in the Western Desert of Anbar.”