The presence of Iraqi forces in Iran set off an online debate about the role of foreign fighters inside Iran. 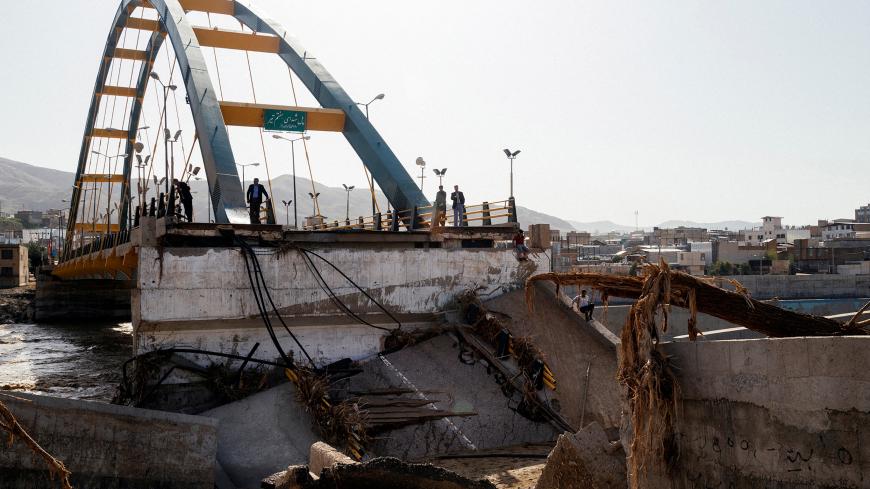 Iran’s ambassador to Iraq confirmed on April 12 that hundreds of members of the Iraqi Popular Mobilization Units (PMU) entered Iran to help with flood relief. According to Ambassador Iraj Masjedi, the PMU, which was formed in response to a 2014 religious edict issued by Grand Ayatollah Ali Sistani to defend Iraq against the Islamic State, entered the provinces of Khuzestan and Lorestan after acquiring visas through Iran’s embassy and consulate.

Social media sites showed videos of PMU caravans entering Iran. Afterward, Iranian-linked social media websites showed the PMU working near the flood-hit areas, waving both the Iraqi flag and that of the PMU unit Harakat Hezbollah al-Nujaba. The PMU presence set off an online debate, given that the last time an Iraqi force entered Iran it was an invasion ordered by Saddam Hussein in 1980, sparking a bloody eight-year war.

Reza Pahlavi, the son of Iran’s last monarch Mohammad Reza Pahlavi, who appears to be staging a comeback from the suburbs of Washington DC, tweeted, “Iranians do not need help from terrorist forces in order to rebuild their country.” He continued, addressing Iranian officials, “Either quickly remove your mercenaries from the homeland or the brave men and women of Khuzestan and Lorestan will remove them. Iran is not the place for militias or foreign armies.”

Pahlavi's reference to the PMU as “terrorist forces” is not a distinction shared by the United States. When the PMU was formed, a number of Iranian advisers from the Islamic Revolutionary Guard Corps (IRGC) worked alongside them to fight the Islamic State. The influence of the Iranian advisers, particularly that of IRGC Quds Force commander Qasem Soleimani, became a sore point with the Americans, who were also working alongside the Iraqi forces in the fight against the Islamic State.

Pahlavi was not the only Iranian figure to tweet critically about the PMU. Iranian actress Mahnaz Afshar tweeted, “Never forget which country our dear ones died fighting,” in response to a video of the PMU in Iran. However, Afshar faced widespread criticism. One user tweeted back, “I’m an [Iranian] Arab … we know the difference between Iraqis and the Western-backed Baathists.” Taking a jab at Afshar’s perceived Western orientation, the user added, “Never forget who sanctioned and is still sanctioning us.”

According to an article in the hard-line Kayhan daily, Soleimani invited the PMU and the Afghan Fatemiyoun Division to help with the relief efforts. The article referred to the Fatemiyoun Division as the “defenders of the shrine,” the moniker given to those who fought alongside Syrian forces against the Islamic State and Syrian rebels. Damascus and other places in Syria are home to important Shiite shrines.

In a video released by Iranian news agencies, PMU commander Abu Mahdi al-Muhandis said that the force came to Iran to help flood victims because it felt “indebted” after Iran’s efforts to support Iraqis. Muhandis notably spoke fluent Persian in the video.

The IRGC and the Basij organization, which operates under it, have taken the lead in the relief efforts in the aftermath of devastating flooding in Iran. On April 5, the IRGC announced that Soleimani, who oversees IRGC operations outside of the country, will spend a month in flood-hit areas to help with relief efforts.