A number of Iranian officials congratulated the Iraqi people and the army for the liberation of Mosul, underlying the importance of good relations between the two countries. 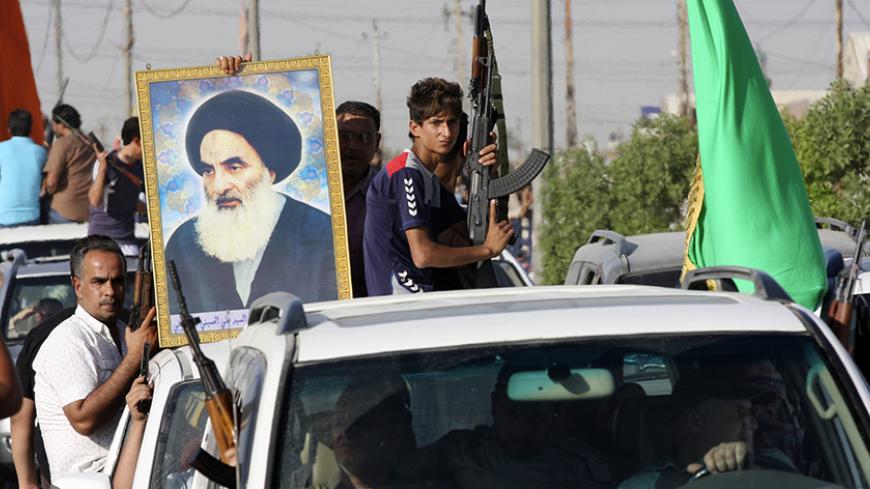 Volunteers who have joined the Iraqi army to fight against predominantly Sunni militants carry weapons and a portrait of Grand Ayatollah Ali al-Sistani during a parade in the streets in Baghdad's Sadr City, Iraq, June 14, 2014. - REUTERS/Wissm al-Okili
Arash Karami
@@thekarami
July 10, 2017

Iranian officials congratulated the Iraqi government, the senior clergy, military officials and the Iraqi people for the liberation of the city of Mosul, which was occupied by the Islamic State (IS) three years ago.

Quds Force commander Gen. Qasem Soleimani, who had traveled to the front lines a number of times among Iraqi forces, said the victory over IS in Mosul is not only for the people of Iraq but for the world and all of humanity. Soleimani said that Iran’s Defense Ministry provided weapons to Iraq around the clock.

Soleimani gave special credit to Ayatollah Ali al-Sistani, Iraq’s most senior Shiite cleric, who he said is respected by all sects in Iraq. Soleimani said that Sistani’s fatwa calling on all Iraqis to defend themselves against IS, which eventually led to the formation of the Popular Mobilization Units (PMU), known as Hashid Shaabi, was instrumental in the battle against IS and “brought together a unity in the history of Iraq that is rare.” Soleimani said that in the meetings between Iraqi and Iranian officials, it was stressed that Supreme Leader Ayatollah Ali Khamenei sent the message that Iran would fully support the Iraqi government and clergy and that Khamenei views Sistani as a “treasure whose importance should be known by all Iraqis.”

Foreign Minister Mohammad Javad Zarif tweeted July 9, “Congratulations to brave people & government of Iraq upon liberation of Mosul. When Iraqis join hands, no limits to what they can achieve.” The Twitter account associated with Khamenei tweeted an older quote on July 9 by Khamenei: “Youths of the Islamic world must know that if they stand firm & resist, their victory over all equipment of arrogance is absolute.” The tweet contained the hashtag "Mosul" and was accompanied by a picture of Iraqi soldiers celebrating. As Iraqi soldiers were encircling IS on the last days, President Hassan Rouhani tweeted June 30 that the defeat of IS “promises better and brighter days for Iraqi people, as for all the region.”

Given the strong links between Iran and Iraq, especially militarily and with the PMU, some Iranian officials also congratulated specific commanders, particularly those close to Tehran. Iranian Defense Minister Brig. Gen. Hossein Dehghan wrote two separate letters, one addressed to Iraqi Defense Minister Erfan al-Hiyali and the other to Hadi al-Amiri, a commander within the PMU, congratulating them on the victory. Chief of Staff of the Armed Forces Maj. Gen. Mohammad Bagheri wrote four separate letters congratulating Prime Minister Haider al-Abadi, Amiri, Hiyali and Abu Mahdi al-Muhandis, the deputy commander of the PMU.

The secretary of Iran’s Supreme National Security Council, Ali Shamkhani, congratulated both Abadi and Sistani. Shamkhani viewed the victory as a joint effort between the Iraqi administration under Abadi, the senior clergy, the Iraqi army and the PMU. He said despite some regional governments’ hopes that IS would entangle Iraq in the long term, Iraqi forces were able to rely on their own forces and take back Mosul.

Iranian media widely covered the liberation of Mosul. The Iraqi prime minister’s statement after the liberation was the top story on a number of news agencies in the Iranian press. A number of articles also focused on the day after the fight against IS. A number of websites published an article by a Lebanese journalist warning that the ideology behind IS will remain strong and that the group will likely regroup in northern Africa. The article stressed that the key for Iraq and Syria now is to close the gap between the two country’s borders.

The territorial defeat of IS is a big relief to Iran. Given the shared 900-mile border, Iranian officials were very concerned in July 2014 when the group suddenly took large parts of Iraq. At the time, Iran’s Interior Ministry said that if IS came within 25 miles of Iran’s borders, they would engage militarily. Iran was one of the first countries to offer weapons and assistance to both Iraq and the Kurdistan Regional Government. Iraq is also home to a number of religious sites that are important to Iranian Shiite Muslims.